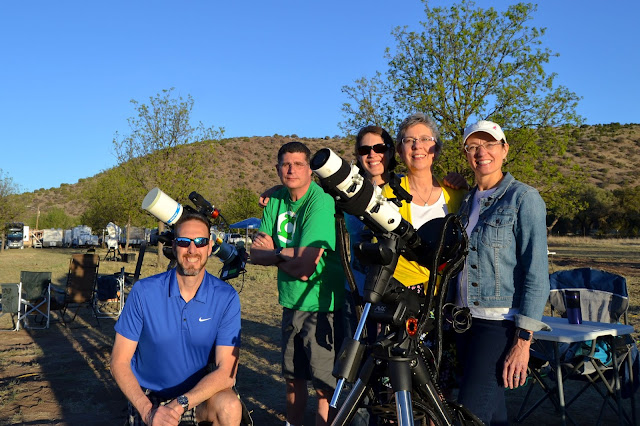 Left to right: dad (Erik), Uncle Chris, me, mom (Jill), and Aunt Jo, with my telescopes

My third Texas Star Party is on the books.  I had a good time!  Despite the equipment failures, the generosity of my friends, family, and star-neighbors more than made up for it.  It was so much fun to have my parents Jill and Erik, and my Aunt Jo and Uncle Chris there!  It made me really happy how my parents and aunt all participated in the astronomy with Uncle Chris and I, especially when my parents took over my visual scope and worked through a whole observing list!  I don't expect they'll become astronomy converts, but I hope they have a better idea of what Uncle Chris and I do now.  There are (many) moments of shouting at equipment, cursing the astronomy gods, and smacking your head on the table, but there are also many moments of joy when everything is connected and your stars are round and the subframe that just came in is so beautiful and perfect.  Add visual observing on top of that -- having the photons that were emitted by some star or supernova or galaxy, after traveled hundreds or millions of lightyears, be absorbed into your retina -- and everything is like magic.  How blessed are we to see such wonders!

My 11-inch Schmidt-Cassegrain on its Celestron CGE Pro mount did not see starlight this year.  In the weeks leading up to TSP, I chased down the issue with a multi-meter and a set of hex wrenches, and came to the conclusion that it's something inside the declination axis motor that is causing the motor to pulse, dependent on slew speed.  It performs gotos just fine, but guiding well is impossible with it in this state.  A new motor, from what few Celestron still has left of it (they are no longer sold by Pittman), is north of $500.  And after everything I've been through with this mount and the CGE before it, I'm not sure I want to spend another dime on it.  I'm still trying to figure out what to do next.

Instead of the CGE Pro, I borrowed two Celestron AVXs: one from fellow club member Derek for a few nights, and one from TSP volunteer Jeff for a few nights.  Both Derek and Jeff were very generous to let me borrow their mounts, which allowed me to still run two rigs and take advantage of the dark, clear skies!  I attached my Borg 76mm apochromatic refractor to it, eventually got my other Orion 50mm guidescope on top, and ran my ZWO ASI1600MM Pro camera on it, with my Starlight Xpress 2-inch, 5-position filter wheel and my Astronomik LRGB filters.  And a problematic Hotech field flattener. 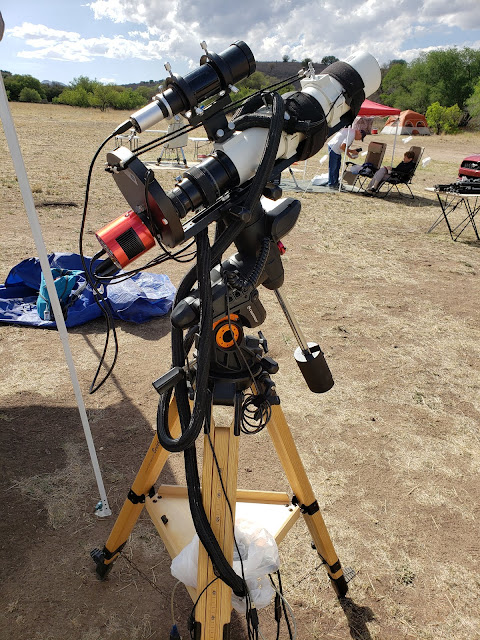 On my own Celestron AVX, I put my Uncle Chris' Takahashi FSQ-106N, my other Orion 50mm guidescope, and my uncle's SBIG STF-8300M with its integrated filter wheel consisting of 36mm Baader filters of LRGB and Ha (hydrogen alpha), OIII (oxygen-III), and SII (sulfur-II) narrowband filters.  Later in the week, I bought the Tak from my uncle for the family discount 😁😁😁😁😁😁😁😁😁 So excited to own one! 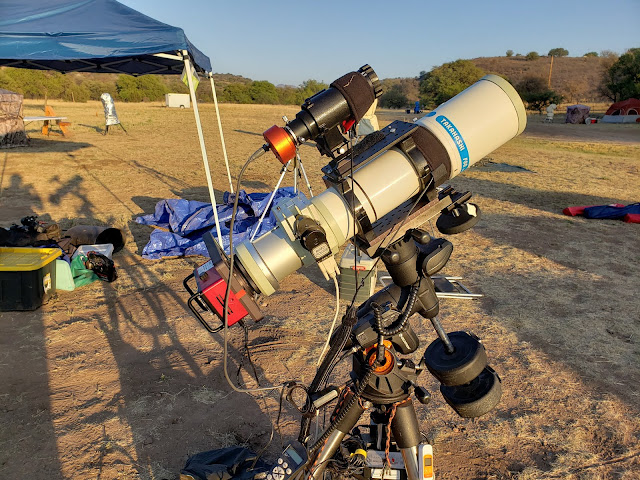 There was some generosity involved with making my DSLR photos awesome too -- fellow club member Paul let me borrow three of his fast Nikon lenses!  A 35mm f/1.8, a 50mm f/1.4, and an 85mm f/1.8.  It was really fun to use those!  I also got to try them out in the daytime, which made for some really awesome photos of some flowers and my cats with the tight focusing range.  The 50mm lens had too much chromatic aberration for me to want to deal with on the stars, but the 35mm lens on my APS-C DSLR chip made the FOV look like a 50mm lens, so that worked out just fine.  I did an image set with the 85mm lens as well on the Veil Nebula, although I haven't finished processing that one yet at the time of writing.

All told, I imaged 13 targets, totaling more than 1,000 subframes and 41.5 hours!  Talk about a productive week!  That comes to 30 GB of images, before processing.  And now I am busy busy busy processing all the data.  And that's just the astro data -- I took some 36,000 timelapse photos, collapsed into a 10-minute movie (many were cut).

It was also fun seeing people I had met in previous years -- everywhere I went, someone else was saying hi!  Unfortunately my memory for people is pretty terrible (all of my brain's memory space is filled up with science, mostly), but I've gotten good at faking that I remember people :P So sorry if I should have recognized you and didn't!

On Saturday night, I was planning on getting started packing up my gear after the Great Texas Giveaway and the speaker, and I was going to set up my Star Adventurer and DSLR to run all night while I slept since it's easy to pack up in the morning and goes on top, but I was tired, it got dark very shortly after the giveaway, and I just really didn't want to!  So I went to bed and left the packing till the morning.  It was cloudy anyway I think, and I would have had to stay up till after the Milky Way rose to cue up a Milky Way widefield target for the DSLR.

It was cool in the morning, although dew had formed overnight for the first time that whole week.  That meant I had to put away quite a few things wet, like my canopy tent.  My dad had taken off Saturday at noon to fly back home to Washington state, so it was just my mom and I packing.  She was great help though, and with her epic-level packing skills, we got everything back into the car, including her luggage.  I did send one of my bins and the CGE tripod home with fellow club member Derek though in addition to my visual scope that he brought down for me, and I'm glad I did because we barely got everything to fit!  After all, I had to squeeze my new Takahashi and the borrowed SBIG camera in there, plus the swag I bought at the McDonald Observatory, the books my mom won, some stuff my family brought down but didn't want to take back (like the coffee maker), and her stuff.  But we did it! 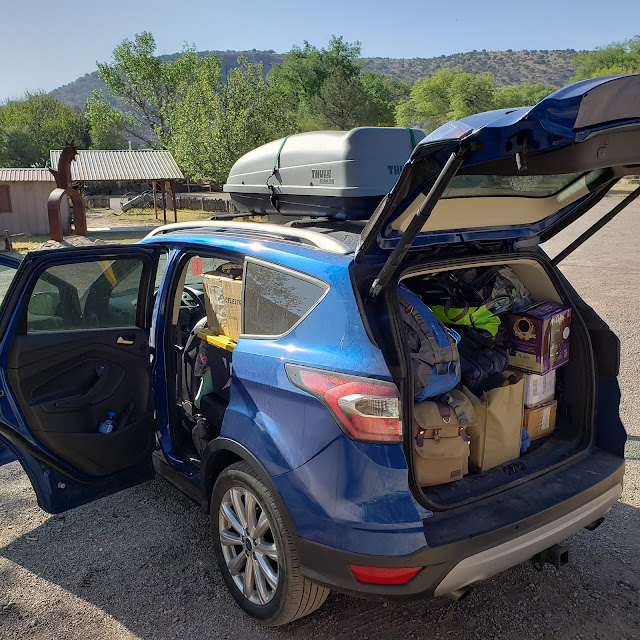 The drive home was uneventful, although I did have my mom drive for a while because I was out of energy.  I didn't sleep though; instead, I started processing photos!  I have an AC port in the car I can plug my laptop into, which is very handy. 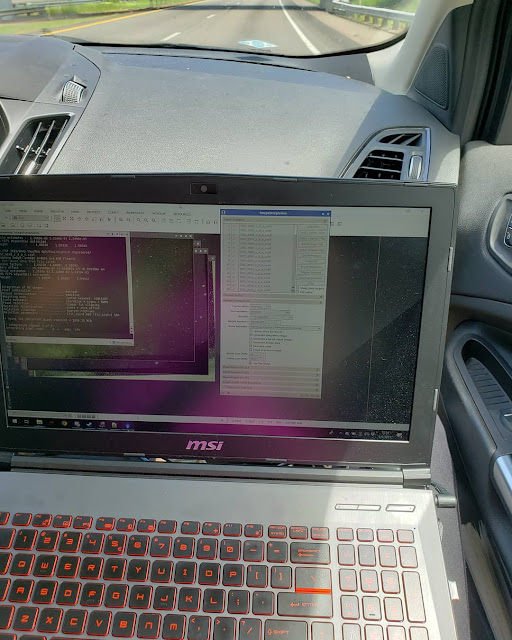 As of Memorial Day weekend when I'm writing this, I'm still working on processing all the data I took.  I'll update the posts for the nights I took the data as I get through them.  At some point soon, I'll also write an "Image Processing 3.0" post with the workflow I've settled into in PixInsight.  I've even saved a bunch of processes with all my settings to a workspace! 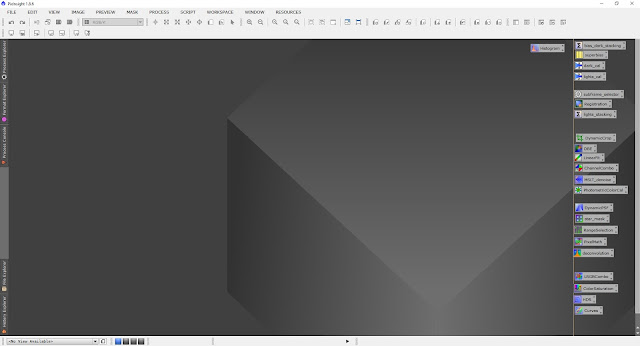 It was a great week of relaxation, hanging out with my family, and lots of astrophotography.  We had a lot of clear nights, and I didn't get a whole lot of sleep!  It was so awesome having my family there.  I brought my youngest sister Melody to TSP 2017, so now I just need to bring my other sister Mary!

I'm starting my PhD this fall, and I have a bunch of classes to take.  They announced next year's TSP dates on the last night -- May 17-24, which is perfect because exams end May 15th!  So there's a decent chance I'll still be able to go next year after all.  Woo hoo!

Posted by AstronoMolly at 9:56 AM