After a frustrating first night, I slept in until about 10 AM,  since my body wouldn't let me sleep much longer.  I took a shower and then got lunch at the dining lodge with my family.  Hamburgers, hot dogs, fries, onion rings, baked beans...yum!

We drove into Fort Davis to get some snack items and some adult beverages, and we stopped for ice cream at the Caboose ice cream shop there in town.  Much to my Louisiana-originating parent's delight, they served Blue Bell ice cream!  (Well, my dad grew up in Louisiana, and my mom ended up there for college as a military brat). 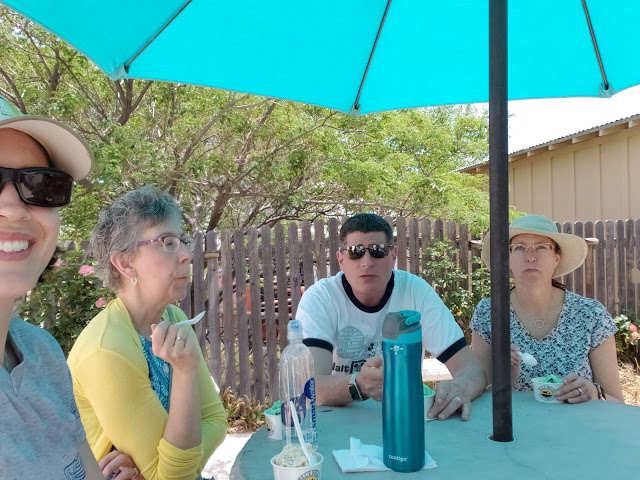 I'm sure they're just going to love that I posted this picture...

I went down to the lower observing field during the day to to work on a few things.  My first goal was to attempt to level my CGE Pro tripod in some way.  Fellow club member John had given me two thin pieces of wood that were thicker at one end than the other -- shims, basically.  My dad and I took the whole mount apart because there it's too heavy to lift and maneuver fully loaded, and because there is no flat place anywhere on the mount until you get down to the empty top of the tripod.  However, we figured out that this still wasn't going to work - we needed to adjust more than one leg, and each shim alone was too thin to support the weight of the mount, since they were starting to crack under the tripod alone.  I also figured out that the circular bubble level that came with my NexStar SE that I have been using for a long time at some point became no longer correct, so I had to pull out my regular level.   In addition, the other feet were sinking into the dirt anyway under load, also un-leveling it.  I finally gave up and didn't even put the mount back together.  I moved the tripod over by my car.  So much for that.

At that point, fellow club member Derek asked if I would like to borrow his new Celestron AVX.  I was happy to accept!  I have such great friends.  I would put the Borg on it.  Back up to two imaging rigs, woot!

To deal with the calibrating the finderscope problem, someone suggested I put the SII filter in front of the camera (mainly so the image wouldn't be too bright) and point it over at the hillside, see where it was pointing, and then align the finderscope to that point.  I hit an immediate snag when Sequence Generator Pro decided it didn't want to connect to the filter wheel anymore.  I selected a different type of filter wheel from the list of available integrated SBIG filter wheels, and then it decided to work, even though it had worked fine last night.  Sheesh.  Anyway, using the hills was a lot easier than trying to find a star!  So I did that, and got it aligned in about ten minutes.  It was hard to move across the top of the ridge using an equatorial scope, especially with the weird camera angle!  But I finally found a distinctive set of trees. 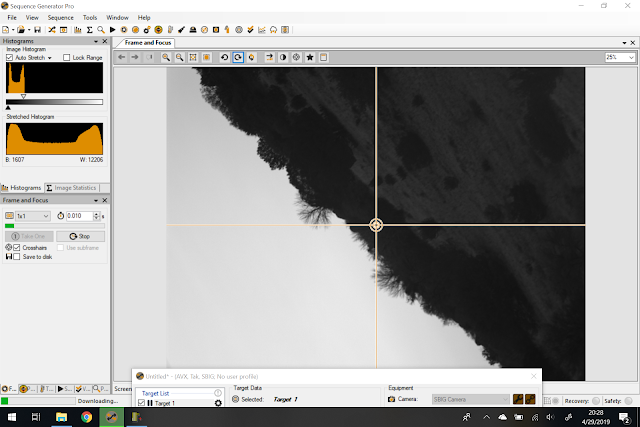 The forecast was dicey, but it was mostly clear at the moment; as darkness fell, I began the alignment process.  It went much more easily with a functioning finderscope!  I was aligned within minutes.  Then I used Celestron's All-Star Polar Alignment to polar align, since I can't get the SBIG to talk to SharpCap for its polar alignment routine.  That went quickly as well since I wasn't too far off, and the red dot finder is easy to use.

After alignment, polar alignment, and re-alignment, and calibrating autoguiding in PHD2 on a southerly star, I slewed to M101, my first target of the night.  I tried Sequence Generator Pro's plate solve routine (configured for the offline version of the astrometry.net indices, as described in this Light Vortex tutorial), and unbelievably, it worked the first time!  It took two attempts to get M101 centered, but it did center it. 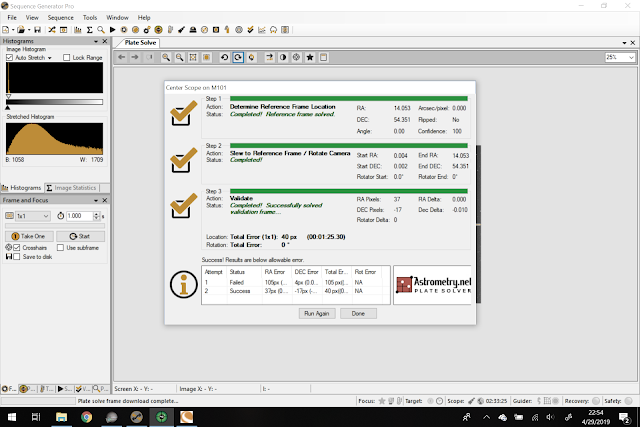 It was so cool.  It was like the future.  Autonomous!  Bonus points, I used Cartes du Ciel to tell the mount to slew to M101.  It was really cool hitting the go command on my computer and having the mount slew.  I felt so cool.

Once this was done, I turned on autoguiding and set SGP to take a 3-minute exposure.  I waited as the progress bar ticked along.  Finally it downloaded -- perfectly round stars!  So I took a 5-minute frame.  Stars were still round!  I couldn't believe it!  Even though the guide graph didn't look great, the focal length was short enough not to see it.  Clouds were forming in the west, but the north was still clear, so I let it take 5-minute frames while I set up the Borg on Derek's AVX.

I got everything assembled easily enough -- I put my Borg 76ED on it with my ZWO ASI600MM Pro and Starlight Xpress filter wheel.  I used the cable bundle I made for the C11 since the one I made for the Borg was on the Takahashi, although the one of the C11 was far too long for the Borg, and I had to figure out a way to loop the cable around so it wouldn't catch on anything.  I took the finderscope off the Tak and put it on the Borg to get Capella into the camera's field of view so I could focus, and I'll be damned if it wasn't dead-on perfect!  I totally guessed on how far out I needed to pull the drawtube when I set it up, and it just happened to be spot-on perfect, like Bahtinov mask perfect.  What a stroke of dumb luck!  I hoped it was a good sign for the rest of the week.

I went to polar align it in SharpCap, but I was getting some weird results -- I was pretty close to start with looking through the finderscope, and it had me move the mount a fair bit.  I wasn't confident in the polar alignment, so I tried Celestron's All-Star Polar Alignment, but it gave a similar answer.  Gotos were consistently pretty far off, however.

Once I got to this stage, the clouds were rolling starting to roll in heavy, and I got to bed around 2:30 AM.  An early night! :O

Table of Contents
Posted by AstronoMolly at 9:04 PM