I am here under the dark skies outside of Fort Davis, Texas for the annual pilgrimage to the hallowed Texas Star Party!  It is on the early side this year, so weather may be dicey, but I am hoping for a few good clear nights.  I loaded up my car with all of my junk (and there is a lot!) and made the multi-day drive down to southwest Texas. 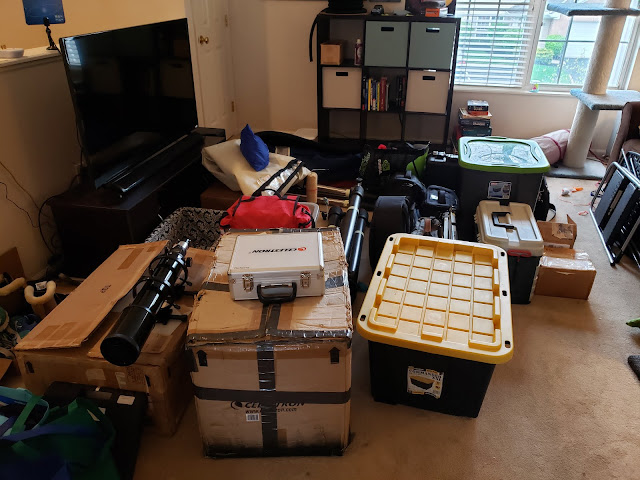 Here's the stuff all staged in my living room!  I wanted to grab a picture of the loaded car, but it was pouring rain in the morning as I finished loading it up.

I arrived around 1:30 PM on Sunday, checked in at the main office, and proceeded to the bunkhouse they had for my family and me.  This year, I convinced my parents to come down, and my Aunt Jo and Uncle Chris came as well!  My Uncle Chris is the one who gave me the 11-inch Schmidt Cassegrain and Celestron CGE mount back in January 2016 that really boosted my astrophotography capability.  He brought his Meade LX850 with a Takahashi FS106 on it.  He also brought his older Takahashi FSQ-106N and SBIG STF-8300M camera for me to borrow, complete with LRGB (luminance, red, green, blue) and narrowband Ha, OIII, and SII filters (hydrogen alpha, oxygen-III, and sulfur-II).  He was trying to sell them as well.  One of my fellow club members put together a Vixen-to-Losmandy dovetail converter so I could put the Losmandy-railed Takahashi onto my Vixen-dovetailed Celestron AVX mount.

My family hadn't arrived yet -- my parents were flying in from Spokane, WA, and my aunt and uncle were driving from Baton Rouge, LA -- so I started pulling my stuff out of the car and getting set up.  It was over 90 degrees F, so I moved pretty slowly!  The sky clouded up in the late afternoon, which provided some relief from the sun.

Later in the afternoon, my aunt and uncle arrived, and then my parents.  I was so excited to have them all here!! It was also nice having them around to help put together the heavier stuff.

Now, my Uncle Chris has a Meade LX850 like I mentioned, which includes the StarLock alignment/guide scope setup, so he doesn't have a separate guide scope, nor a way to attach one.  Luckily, he brought a Losmandy plate with a bunch of holes in it that attaches to the top of the rings that I was able to attach one of my Orion 50mm mini-guiders too without much trouble.  The FSQ-106N has a focal length of 530mm, which is well within reach of the Orion 50mm (it has a 162mm focal length).

Now, for my CGE Pro, if you've been seeing my posts lately, you've seen the problems I've been having with the declination motor (see here for a rundown, and then my Facebook page for the play-by-play of what I've been doing to fix it).  Long story short, the dec motor is "pulsing" or something, even when completely detached from the mount, and even when it's plugged into the RA circuit board (they're identical except for some added limit switches).  It almost feels like something is sticking or dragging.  Anyway, it's making the stars vibrate back and forth when I slew in dec, and of course this is wrecking tracking and guiding.  So, my plan was this: I was going to polar align really well, drift align, and then turn off guiding and tracking in declination (I learned recently that Celestron mounts do indeed do some tracking in declination to help compensate for polar alignment).

However, I never got that far: I started setting up the CGE Pro mount, and the tripod leg I had raised slightly to level slipped as I loaded it up, so it was no longer level!  Now, I had had this trouble previously with a tripod leg bolt that I had to replace, but in this case it was one of the original ones.  That tripod came with the CGE, I guess it's just not meant to hold up the CGE Pro...Now, normally, you don't really need to be level with an equatorial mount.  However, not being level was going to make doing polar alignment, and especially drift alignment, really difficult, if not impossible.  This is because if it's not level, when you go to adjust altitude, it also changes azimuth, and vice versa.  I decided to try it anyway.

Night fell, and as usual for Fort Davis, the clouds before sunset cleared out after.  Not entirely, but plenty enough to do all of the first night's work of alignment, polar alignment, focusing, and calibrating the autoguider.  I worked on my own AVX first with the Takahashi, and encountered an early problem: I couldn't get the driver for the Robofocus electronic focusing unit my uncle had on the Tak to load.  The Robofocus driver showed up in Sequence Generator Pro, but it wouldn't connect, and I needed the ASCOM driver. I installed some software that was supposed to have it, but it still wasn't showing up in SGP as an ASCOM driver.  He told me I could just hit the buttons on the control box for it though, but I didn't see any defocused stars in the home position to focus on.  So I slewed over to Scorpius, which would definitely have more stars, and sure enough, there were a quite a few in the field of view.  I got it focused, and then slewed back to the home position for polar alignment.

Since SharpCap doesn't talk to SBIG (at least, not as far as I can tell), I wasn't going to be able to use SharpCap's polar alignment algorithm.  However, Celestron has its built-in All-Star Polar Alignment routine, so I decided to use that.  First, though, you need to align.  Since it wasn't polar aligned, its initial guesses weren't very good, and I was going to need a finderscope to get a star in the field of view.  So I grabbed my dual bracket so I could have the guide scope and finderscope side-by-side, and I pulled a spare red dot finder out of my tackle box.  Of course, it had somehow gotten switched on a while back, so the battery was dead.  Back over to the tackle box I went, where I replaced the battery.  During the process of trying to take the battery cover off, it came off suddenly and went flying!  The battery won't stay in place without it!  Luckily it only took a few minutes to find with my aunt's much brighter red flashlight (which probably annoyed our neighbors -- sorry!)

Finally, after all that, I put the finderscope back onto the telescope.  However, the battery was kind of loose, and I couldn't get the red dot to stay on.  My other finderscope was in the car, in the case with my Borg telescope, and even though I had put the red filters on my car's lights, I still was hesitant to open the doors to grab it out.  Without a functioning finderscope, I was unable to align.  I was feeling pretty defeated by this point after all of the frustration in the last week about trying to fix my CGE Pro. It just wasn't fair!  I've worked so hard at this, and I just can't catch a break.

At that point, I decided to give the CGE Pro a go, but polar alignment in SharpCap was, indeed, really hard.  I just couldn't quite land on a close enough polar alignment, since changing altitude changed the azimuth position too, and vice versa.  The one good thing is that the rods I got to turn the altitude adjustment screw worked great.  It was easy to turn, although I had to keep taking them out and putting them back in to the next set of holes every fraction of a turn.  I started having issues getting connected to the mount via USB, however, and tired and frustrated, I gave up on that too.

At some point, I went ahead and set up my Sky-Watcher Star Adventurer DSLR tracker, and put the Nikon 85mm f/1.8 lens I was borrowing from fellow club member Paul onto my Nikon D5300.  I polar aligned it using the polar scope and a super handy smartphone app called simply "Polar Alignment" to tell me where on the 12-hour clock face of the polarscope Polaris should be for my location and time.  Way easier than the whole rigmarole of setting the date and the meridian offset and all that junk.  Yay technology!  The Star Adventurer kept slipping around a little bit though, particularly the altitude axis, which I can't figure out how to tighten down. I also want to replace the azimuth tightening screws with thumbscrews!  So it didn't stay dead on after I got the dovetail, counterweight bar, and camera loaded on, I'm sure.  After that was done, I took some test exposures, but 60-second exposures with the 85mm were still showing streaky stars.  So I swapped out for the 35mm f/1.8 lens I was also borrowing from Paul, stopped it down to f/2, and pointed it at the Rho Ophiuchi region and part of the Milky Way.  I took 1-minute, then 2, then 3, and the stars were rock-solid!  Easy at that short of a focal length, haha.  At 3 minutes, the camera was nearly saturating at ISO-1600, so I let it take 3-minute exposures the rest of the night while I went back to my scopes.  I had plugged the camera into AC power, plugged the Star Adventurer into a smartphone power bank, and set the intervalometer to take infinity exposures, so it clicked away contentedly.

Throughout the course of the evening, I occasionally went over to my friend's scopes to see the things they were looking at.  Against the dark background of the southwest Texas sky, just about everything jumps out, including dark nebulae.  I looked at M16 Eagle Nebula, M17 Swan Nebula, and M57 Ring Nebula in my friend Rick's scope.  They looked great.  It was a real treat.

It was late enough by this point and enough people had gone to bed that I chanced opening up my car doors briefly to grab the Borg case.  I saw how well my red headlight filters work, though -- I couldn't remember just how dim they really do make the headlights.  The red film I got from B&H Photo has only 13% light transmission.  (See my post on reddening my Ford Light Beacon!)

With the functioning finderscope in hand, I tried to align the AVX again.  However, the finderscope wasn't aligned to the Tak, and I still couldn't find the star.

I finally called it a night at 5 AM.  I just can't give up!  I covered the scopes, moved the Star Adventurer under the canopy tent, and trudged back to the bunkhouse for some sleep.


Table of Contents
Posted by AstronoMolly at 8:02 PM