I know it's been a minute since I last posted!  I was doing a thing for work for six weeks out of town, and obviously I didn't want the whole internet to know that my apartment was empty.  I took the lunar eclipse images there, having brought my camera gear for that exact purpose.  Then I was out for a week touring the graduate schools I got into before I had a chance to write a log entry for this night or work on processing the data.

It was exciting to be back out at the observatory!  It was a chilly night, below freezing, but it was clear and the moon was only a crescent, so it was worth it.  The ground was very squishy after all the rain we had gotten earlier in the week.  I brought out my ZWO ASI1600MM Pro and QHY5 guide camera to use my astronomy club's memorial dome setup (Celestron CGX-L with a Meade 127mm ED apo refractor, f/9), both of my DSLRs (Nikon D5300 and D3100), and my new Sky-Watcher Star Adventurer. 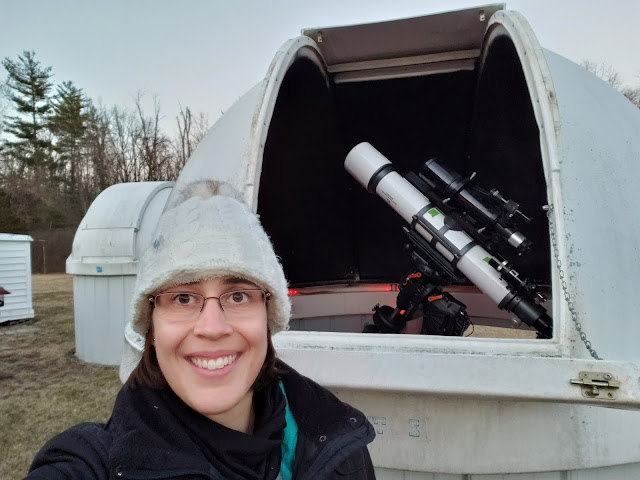 The forecast was pretty promising, and the moon was a small crescent, so imaging wouldn't be too hindered by it.  One of my fellow astronomy club members, Kevin, asked me to show him the ropes on astrophotography, so I invited him out as well.

I got out there a little after sunset, and upon signing into the log, noticed that no one had been out to the observatory in nearly a month!  There had been quite a bit of weather in the prior month, so a few things weren't working; I had to hit the reset button on the GFI outlet that the memorial dome plugs into, and the central building heater didn't kick on, so I used the two room heaters in the warm room instead, which got it up into the 60s in there at least.  The ground was very squishy from recent rain.

While I waited for Kevin to join me, I started polar aligning the Star Adventurer.  I had practiced in my hotel room on my work trip before the lunar eclipse, but hadn't actually had a chance to polar align it outside yet, so I referred back to the manual.  First, I needed to make sure it was calibrated, which is done by rotating the RA axis and seeing if the crosshairs in the polar scope moved against the background.  They did, which requires you to use a tiny hex wrench to adjust the position of the etched pattern plate inside the polar scope.  After some adjustment, however, it ended up coming loose, so I took it inside to get it back into position after unscrewing the eyepiece-thing.  While I was tightening the screws back up, I realized a screw was missing!  So I wouldn't be able to calibrate it.  I also couldn't get it positioned quite correctly with the eyepiece thing, so it's out of focus.  (At first, I had it in upside down!  But I fixed that, and it's still not quite at the focal point.)  So I abandoned trying to actually polar align it, and just did a rough alignment using a compass, the altitude indicator, and a polar alignment app on my phone showing where Polaris should be on a polar alignment circle for your location and time.  I hoped it would be close enough.

Kevin came, and I set up my Vixen Polarie for him to use while I played with the Star Adventurer, and I attached my Nikon D3100 to it with my 50-200mm lens at 95mm, f/5.  I got the Polarie connected to one of my external cell phone batteries for power, and showed him how I find the target and focus the lens.  I went for an easy one: the lower half of Orion, to include M42, the Flame Nebula, and the Horsehead Nebula.  I had a hard time finding focus though - the stars would pixelize in my 5s exposure, which usually means I'm in focus, but they looked a little fat still.  I always have a hard time finding infinity focus on that lens -- it's a really small spot!  I checked around that point, and couldn't get any closer, so I decided just to roll with it, mainly because it was cold.  I did a couple of test exposures to find how long I could expose for with my rough polar alignment, and I got up to 90s before it started to show star streaks, so I just rolled with that.  Orion was getting closer to the western part of the sky, where there's a fair bit of light pollution, so I hoped it wouldn't be too hard to process.

We went inside to warm up, and I kept fussing with the Star Adventurer, but couldn't get the pattern plate situated right still, so I gave up for the night.  After we were warm, I brought Kevin out to the memorial dome to show him how I polar align it with SharpCap.  I got to within a few arcseconds of perfect, and then I tightened down all of the bolts on it.  I've been having trouble with it "slipping;" every time I go out there, the polar alignment error is back up to like 40 arcminutes or more.  So we'll see if it holds this time.  I know it's not the pier because the Losmandy Gemini we had on there previously, while I never checked the polar alignment, was so spot-on and rock-solid that I could guide for at least 25 minutes (I checked one hazy summer night).  Once that was done, Kevin had to head out.  After he left, I re-aligned it, and by the last two calibration stars of the four I entered, it was hitting pretty close to perfect on the gotos.  After that, I decided to call it a night as well -- it was 11:30 PM, and I had to work the next day.

On my drive home, I saw something big and orange out of the corner of my eye -- it was the setting crescent moon, lying on its back!  It was enormous, and was just kissing the horizon.  Time for it to light up someone else's night.

I finally got to process the data on Orion on March 19th.  It turned out to be a difficult dataset for a couple reasons:
1) The stars were a little bit stretched from tracking
2) I couldn't quite achieve perfect focus
3) It was getting near the light pollution to the west
4) I only wound up with about 31 frames after ditching some to tracking error and cutting some during subframe selection

So I didn't spend a ton of time massaging it, but hey, it's still a decent picture of outer space! 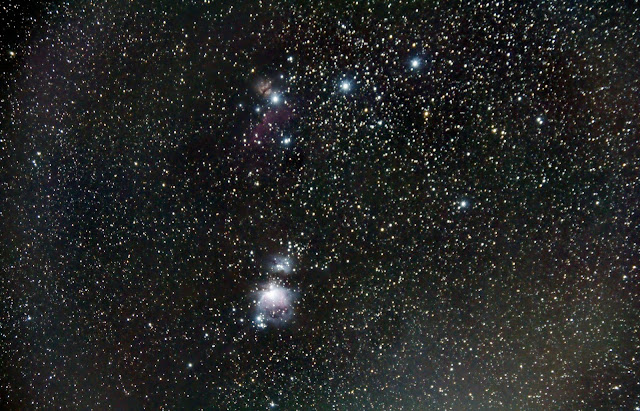 And now Kevin has a decent dataset to practice and learn how to process in something like DeepSkyStacker.  Best of luck!

Posted by AstronoMolly at 2:20 PM