Sunday night was the "Super Blood Wolf Moon," as I'm sure you've heard by now a dozen times.  If you need words like "super," "blood," and "wolf," to get you excited about astronomy, like that's cool and stuff, but really it's just a lunar eclipse!  It does happen to coincide with a "supermoon," which is when the moon is slightly closer to Earth in its elliptical orbit during its full phase.  The "wolf" part comes from the fact that every month's full moon has a special name, usually said to be from Native American tradition -- according to the Farmer's Almanac, at least.  (I loved the Farmer's Almanac when I was growing up -- I'm a little bit of a data junkie).

When I got started in astrophotography in 2015, I felt like lunar eclipses were common.  I didn't use to pay a whole lot of attention to celestial events before I got a telescope, but I knew there had been several lunar eclipses visible in North America in the previous two years (September 28, 2015; April 4, 2015; October 8, 2014; and April 15, 2014, to be exact).  We had a lot of clouds in September 2015, and I was out of town a fair bit, so I missed my first lunar eclipse with a telescope.  I wasn't worried though; they happened so often!

Well, it would be more than three years before my next opportunity came.

I saw this one on the list of eclipses when I was doing solar eclipse research back in 2017, and I made sure to mark my calendar!  As it turned out, I was going to be out of town that weekend, so I made sure to bring some gear with me.  I wish I had been able to set up my scope!

I recently bought a used Sky-Watcher Star Adventurer tracker mount from a good astro-buddy of mine, which I am hoping will be a step up from my Vixen Polarie in both features and accuracy.  I've had a pretty tough time with the Polarie, and it would take the purchase of a lot of accessories to make it better.  The Star Adventurer came with everything I needed -- counterweights, polar scope, 3/8 tripod connection, and even some really cool additional features like built-in timelapse triggering, the ability to slew in RA, and additional speeds, up to 12x sidereal (for timelapse). 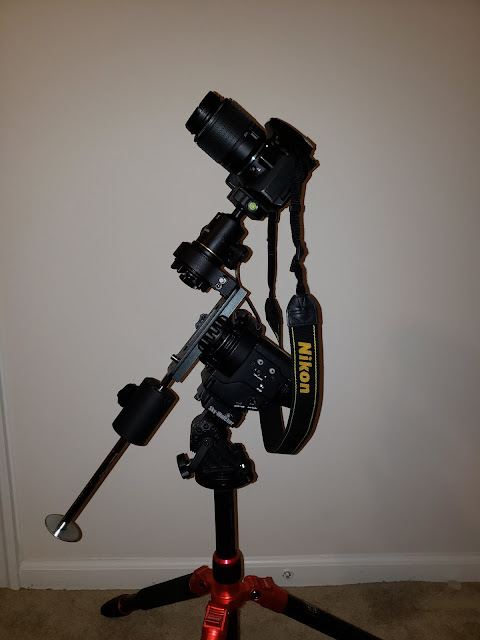 I won't normally have the center post extended like this, but I just whipped the setup together to figure out how to build it.

I bought a new camera bag to hold both the Star Adventurer and the Polarie, and it's a perfect fit.  I even have spare batteries, USB cables, velcro, and a couple tools in there.  In another camera bag, I brought my Nikon D5300 and D3100, all three of my lenses, and my intervalometer and remote release.

I spent a goodly portion of Saturday writing the BackyardNikon script.  I used Mr. Eclipse's (Fred Espenak) lunar eclipse shooting table for guidance, and then I tested the time it took between frames to download and capture the next frame so that I could work out the timing.  I also used the neat graphic on Time and Date to see what time each event was going to occur. 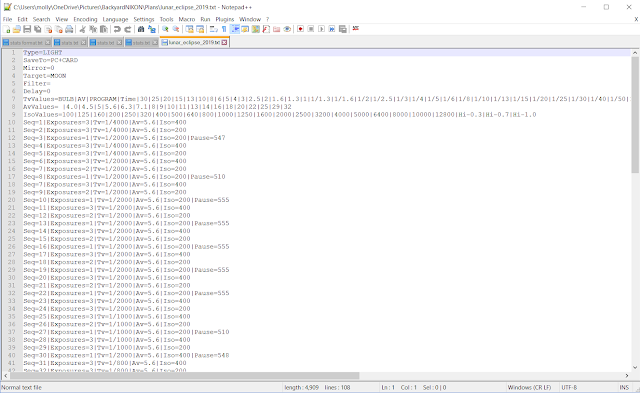 I kept track of what phase at what time needed which exposures in a spreadsheet. 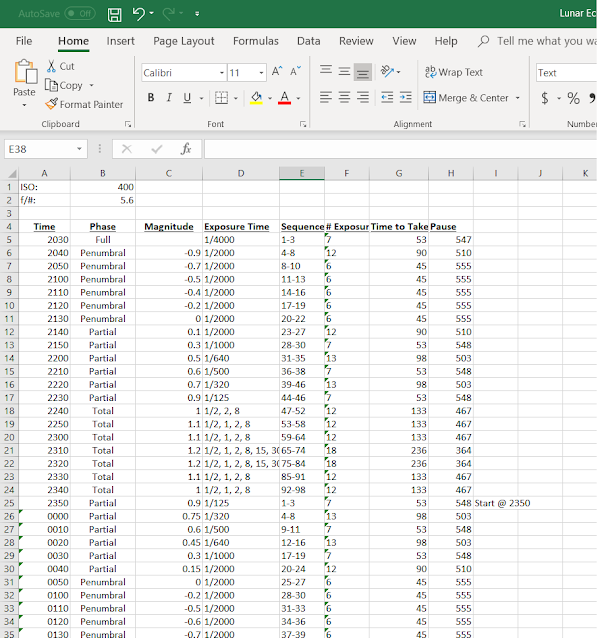 In addition to the ones on the spreadsheet, I also had a lot of exposures at ISO-200, and in exposure times around the ones listed.

While I was making sure everything was going to work, on a whim I tried plugging my new intervalometer (my last one succumbed to dew) into the D3100.  None of the three intervalometers I have tried with it have worked (despite that fact that a remote shutter release on the same port works perfectly fine).  But much to my surprise, it worked!  And not only that, but it worked for long exposures too.  This is a game-changer!  Now I can put the D3100 to work at night again.  It still won't talk to the computer besides letting me offload the files, but I can set it up to run on its own all night long if I only need one exposure time and ISO setting.  Which is most of the time.  Woo hoo!  Now I don't have to buy another DSLR to do that...

At about 8 PM local, I went down to the spot I had scouted earlier, which was just outside a door so that I could go back inside where it was warm.  I set up inside and then brought everything outside.  I put the D5300 on the Star Adventurer, and then my D3100 on this little 6-inch tripod I have to record the whole thing wide-angle.  I got everything built, but couldn't find the USB cable for my D5300.  I scoured my camera bags, but it was nowhere to be found! So I had one of my friends watch my gear and I dashed back to my hotel room to see if I left it on the desk -- but it wasn't there either.  It's a special proprietary connection of course (dear Nikon, please just switch to micro USB, or even USB-C now), so if I couldn't find it, I was going to have to use the intervalometer for the partial phases and control it myself around and during totality.  After not finding it in my room, I once more tore my bags apart, and finally found it hiding underneath a ball mount in the mount bag!  I rushed everything outside and just disabled the first line so that it would start at sequence 2 at 8:40 PM.  After making sure everything was taking off, I went back inside and had a couple beers with some new friends. 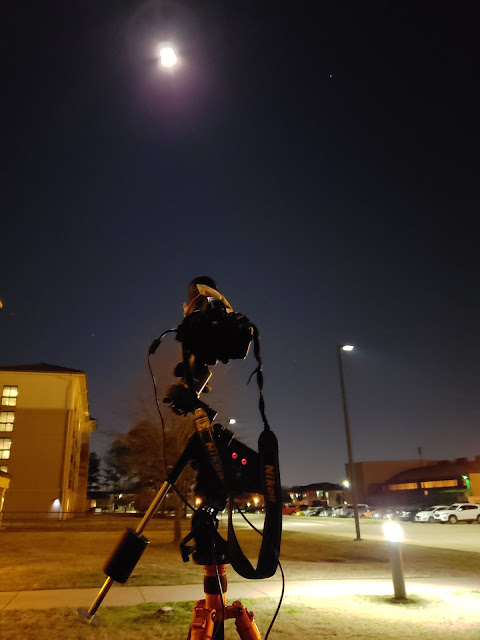 I couldn't actually polar align the Star Adventurer because my spot with the southerly view and the nearby warmth also meant that the building was blocking Polaris.  Luckily, the moon would be short exposures, not the long ones I usually do for deep sky objects, so good polar alignment wasn't important -- I just needed to be close (which my phone's compass and GPS coordinates for latitude helped with).  I did have to periodically adjust where the camera was pointing, however, since the moon was starting to drift toward the edges of the frame.

By about 9:20 PM local, you could start to see the bottom of the moon beginning to darken.  Over the next hour, the bite taken out of the moon grew larger and larger. 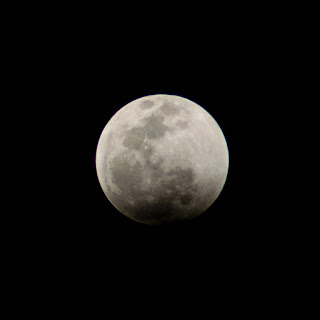 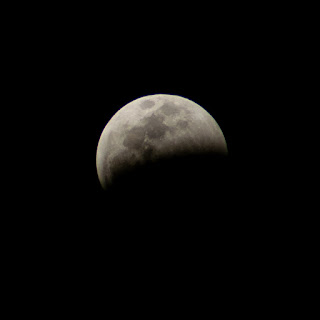 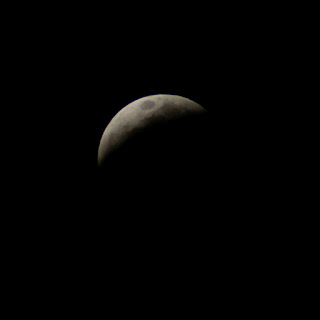 We popped outside every once in a while to check on the progress.  I also checked that my exposures were still going.

As totality neared, the moon started to look very cool.  We stood outside for about 20 minutes watching the daylight shrink. 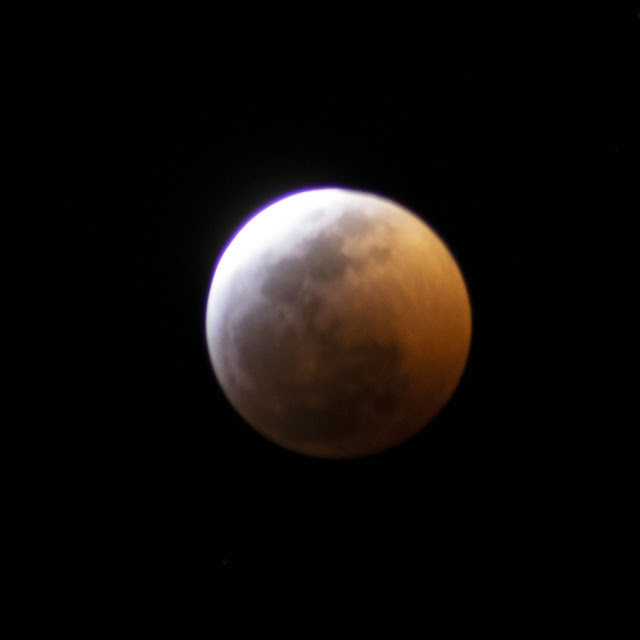 Finally, it was totally in the Earth's shadow!  It was pretty dark.  It looked to me like a dim red-brown button on a black velvet pillow.  The sky was very dark for being in a city -- the transparency was excellent, which helped.  It was beautiful and eerie.  Imagine being some ancient person and having no idea what was happening to the moon! 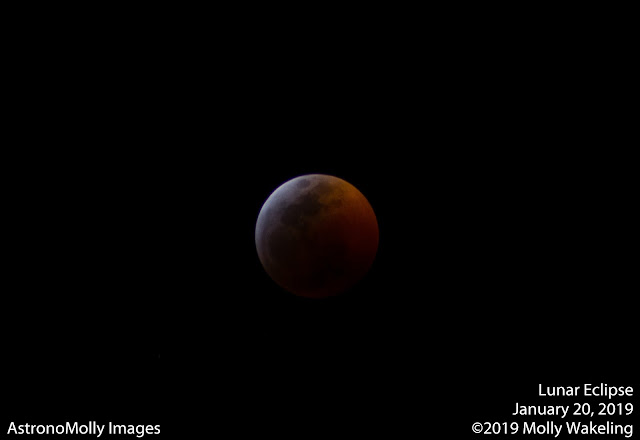 My script had gotten a little behind, so I stopped it, disabled all of the sequences up till the time it was according to my spreadsheet, and hit the go button again.  I also took a number of my own exposures on the camera during the pauses, although I forgot to put on the remote shutter release, so many of those turned out blurred.  The focus had also slipped a bit, and at some point dew formed, since I didn't have my dew heaters up close enough to the aperture.

A couple times throughout, I had to move the mini-tripod in order to keep the moon in the field-of-view of the D3100 with my 18-55mm lens at 18mm.  It's not quite wide enough to get the whole thing.  I will figure out some way to mosaic them...

Around 1:40 AM, everything was over, the moon was back to being bright and full, and I was tired!  It was a great night and an amazing event.  I couldn't have asked for clearer skies (although warmer temperatures would have been nice!)  It was also windless, which helped a lot too.

The next step was to come up with cool ways to display the images.  This one is my favorite so far. 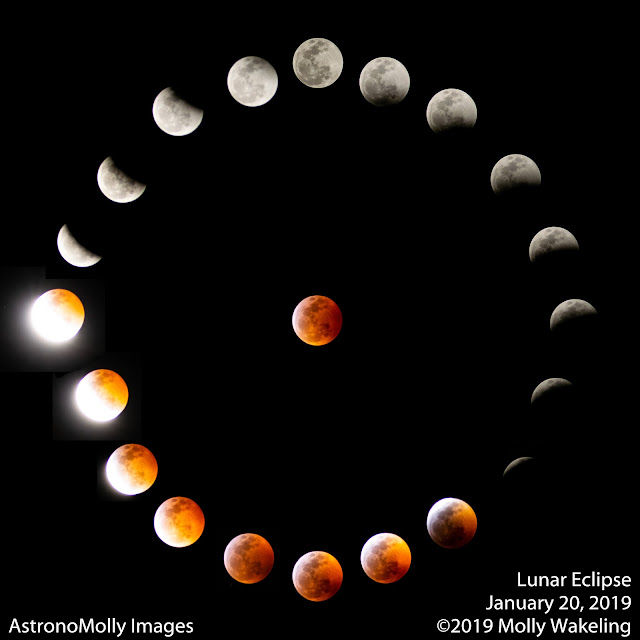 I will keep working on more!

The D3100 ran on the intervalometer, and with a couple changes in exposure time and position so that the moon wouldn't go out of the camera's field-of-view, I put together this cool sequence shot! 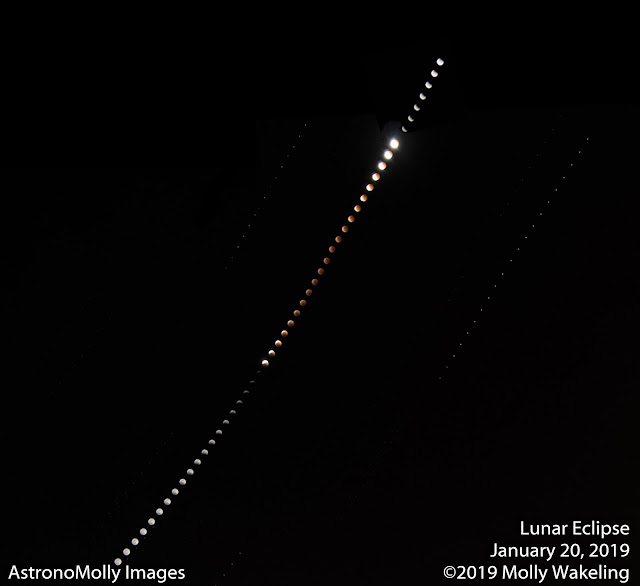 Table of Contents
Posted by AstronoMolly at 2:54 PM