Since I haven't gotten out much in the last couple months due to being away from home, I'm itching for some starlight!  The forecast was mixed across all my weather apps, with some showing clouds rolling in around 9, while others held off till midnight.  I figured it would probably be a bunch of that thin high hazy stuff, and besides, the moon was just a few days past full.  So I decided that it would be a good night for experimentation, since if things didn't go well, at least I hadn't wasted a good night.  I invited fellow astronomy club member Kevin out again, who is interested in learning astrophotography, and brought my Nikon D5300 and Vixen Polarie for him to play with while I worked on some stuff with the club's memorial telescope.  Fellow club member Rich was also out there, who was planning on doing some binocular observing.

I had three personal goals for the evening:
- Check to see if the polar alignment on the memorial scope held after I tightened all the bolts last time
- Measure how long it will guide for
- Acquire some images with my new Astronomik 12nm Hydrogen Alpha filter my uncle gave me :D:D

I opened up and plugged in the memorial dome, and booted up the mount, which unfortunately did not offer to un-hibernate itself -- it would appear that someone used it and didn't fill in the logbook (probably someone came out to qualify on it after last weekend's public stargaze), and didn't hibernate it.  So I would have to re-align, darn!  But first, I needed to check the polar alignment. Last time I was out, I polar aligned the memorial scope's Celestron CGX-L mount and tightened down all the bolts.  It appears to have helped -- I only had about an arcminute of error this time instead of over a degree, which isn't great, but was better.  I used the pro version of SharpCap to do the polar alignment, which is super handy and easy and just requires that you have a camera plugged into the scope, which of course I already have.  Luckily, whoever used it last weekend didn't adjust the focuser, so my camera as already in focus.  I tuned the polar alignment, and then set about doing the alignment.  However, after entering the time and date, the hand controller told me that there were no stars above the filter limits!  So I double-checked the time, date, time zone, and GPS coordinates, and all were accurate.  I re-booted the scope, but this was tricky because the hand controller has a backup battery so that you don't lose alignment during a brief power outage -- a handy feature at star parties, but at the moment, the bane of my existence in trying to do a hard reboot.  Unplugging the hand controller from the mount didn't help.  I finally got it to reboot, but still got the same warning.  Finally after a couple of tries, I got it to show me some stars, although it only showed like five.  One of them was Caph, which was indeed up, but very low in the north.  I also tried Castor, but it pointed the scope somewhere east that was definitely not anywhere near Gemini.

I went inside to flip through the manual on my cell phone and think about what to do, and the idea occurred to me to try running it through my computer, like what I used to have to do on the Losmandy Gemini mount we had in that dome previously because the hand controller's buttons stopped working.  So I went to Celestron's website and downloaded the PWI application to my phone, and then Bluetoothed it to my tablet (I couldn't get good enough cell phone reception in the area of the memorial dome to be close enough to tether my tablet to my phone, and the observatory's wifi was down).  Finally, I installed the program, plugged the mount directly into my computer via USB (the CGX-L has a dedicated USB port, meaning you can skip the hand controller entirely).  At last, a stroke of luck -- it connected immediately!  I went through the alignment procedure in the app, which unfortunately had far fewer stars to choose from than the hand controller.  It got a bit tricky though because I had to have the slew buttons window active in order to press the keyboard arrow keys to move the mount, but you couldn't minimize the main application and just have the slew buttons up, and I needed to also be able to see the camera image.  My tablet has a high-resolution screen, but it's still only 10 inches diagonally, and the Celestron app wouldn't properly half-screen; it still took up like two-thirds of the screen.  But the SharpCap window went half-screen well, so I was able to have both windows open at once and get the star in the crosshairs.  I added two western stars and one eastern, and called it good.  (Sorry I forgot to take screenshots!)

Okay, finally aligned.  Leaving my filter wheel attached because without it I can't get far enough away from the scope to focus (it has a looooong backfocus, which is very handy for astrophotography), I screwed on my new hydrogen alpha (Ha) filter to the end of the barrel, and checked that the filter wheel was on Luminance.  (In hindsight, I forgot that I had an empty slot that I could have used instead).  I slewed over to Betelgeuse to focus both my imaging and guide cameras.  My imaging camera on the main scope was not only in focus, but perfect focus already with the Bahtinov mask!  Even with the added filter (which didn't add any length since it went inside the tube, but a filter's index of refraction can sometimes change the focal point ever so slightly).  You know, I always say I want more people to use the memorial scope, but secretly I don't because I like not having to re-focus and re-align every time I go out there ;)  I checked the guide camera focus, and it was good enough.  Then in the Celestron app, I wanted to slew to the Horsehead, but it's not in the Celestron catalog, nor are any Barnard catalog numbers, so I just went to the Flame instead to test (which it doesn't know by name, but the Flame Nebula does have an NGC number, NGC 2024).  I saw that Alnitak, the leftmost Orion's Belt star, which is right next to the Flame, was a bit up and to the right, so I slewed the scope using my keyboard again down a bit to get it where I wanted based on looking at the orientation in SkySafari.  After calibrating the autoguiding app PHD (which also went smoothly, thankfully -- the Celestron PWI app showed up as a driver!), I acquired a 3-minute test image.  And there it was!  Unfortunately, since I was in SharpCap, it didn't save :( But it looked quite nice.

I wanted to image the Horsehead Nebula though, so I pulled up the celestial coordinates in SkySafari, slewed there, and then flipped over to Sequence Generator Lite to start imaging.  (I like the way it names files, the stuff it puts in the FITS header, and other features that are easier to access than in SharpCap.)  PHD's guide graph was not looking good (again, forgot a screenshot, but my total RMS was like 2 arcseconds).  Then, Sequence Generator kept crashing when it tried to connect to the camera.  So I went back to SharpCap, and it wouldn't connect either!  I unplugged and replugged the USB cable for the camera, but no dice.  So I quit PHD and the Celestron app and unplugged the USB hub, then plugged back in.  Camera was back, woot!  I opened it in Sequence Generator, set the settings, re-started PHD (it saves the last calibration by default now, which is super handy), and also restarted the Celestron app (it needs to be running for PHD to talk to it).  But when I went back over to the Celestron app, it did not save the alignment!  And I couldn't even find any buttons that would have let me.  I decided to experiment with going through the hand controller USB instead of directly to the mount so I could test whether it would save alignment if I went that way, and I was able to connect.  By the time I added a couple of alignment stars and got back on the Horsehead Nebula, it was dropping down below the main observatory building, and there was a bunch of cloud cover.  So much for that.

But I was back up and running, and wanted to image something.  I flipped through the SkySafari "tonight's best" list to see what glowed in hydrogen alpha that was up, which in the springtime isn't much because it's galaxy season.  (I am really excited to use my Ha filter to get the gorgeous red star forming regions in other galaxies, but since this was a test night, I wanted a big easy target like a nebula).  M82, the Cigar Galaxy, was on the list, and it has giant hydrogen jets coming out of it that I have been dying to capture.  So I slewed over to there, started acquiring, aaaand I swear I heard the scope slew or something, and then guiding was just totally borked, even after I acquired a new guide star.  Finally I threw in the towel -- it was almost midnight, the clouds were getting thicker, and the moon was rising, so I a) wouldn't be able to do a proper guiding test because the bad atmosphere would mess with the results, and b) I wouldn't be able to get any good hydrogen alpha images.

One thing I did achieve for the evening was setting up a timelapse on the memorial dome.  I only got about 26 seconds of video out of it, and it's not terribly exciting, so I'll hold onto the clip for an observatory compilation video I'm planning on making this summer.  But timelapse video can be dual-purposed as a star trail image too, so here's that! 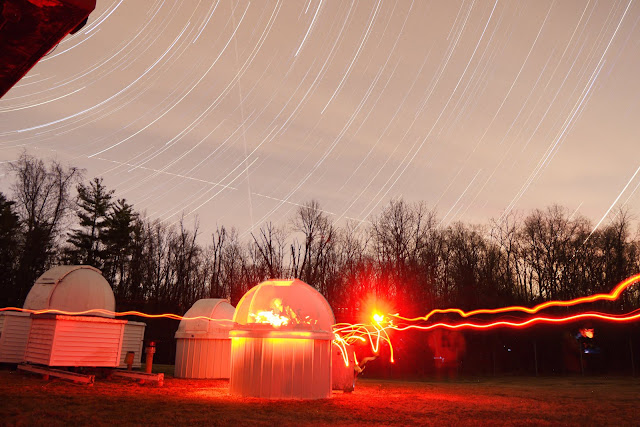 In addition, Kevin got some practice focusing the 55-200mm lens on my Nikon D5300, although he ended up not imaging because he was watching the live entertainment show of me struggle-bussing with the Celestron CGX-L instead.  😂 Rich also joined the show and didn't even pull out binoculars!  It was indeed an instructive evening.  I got to try out the new Celestron mount control software and see all the features it lacked that I needed (where's Precise Goto?  Goto home position?  Save alignment?  Load last alignment?  There was a "configuration" button that had some stuff in it, but not even half of what you can access from the hand controller!), and I got to try out my hydrogen alpha filter.  Hopefully next time I can get some good results!  And I'll come prepared with either having this software figured out, or having some other piece of software to control it.


Table of Contents
Posted by AstronoMolly at 11:35 AM