Over the last year and a half, I have been doing astronomy outreach programs at the local libraries to show patrons how to use the library telescopes.  My astronomy club donated an Orion StarBlast 4.5 to one of the libraries in 2017, and modified it as well to make it easier to use and a little more fool-proof (attaching strings to the caps so they don't get lost, swapping the CR2032 button cell battery on the red dot finder for two AA's instead, etc).  It was so popular that other libraries in the area purchased their own (they're only about $200) and we modified those for them as well.  Patrons can check them out for a week at a time and take them home, camping, out to the local state park or other dark sites, etc.  My Girl Scout co-leader works at the library that got the first scope, and doing the program was her idea.  It's grown since then, and now I've done programs at seven libraries!

This library in particular had 20 people sign up and a waitlist, but only about 10 actually came over the course of the evening, ranging in age from toddlers to elderly.  It was chilly, but not too bad (low 40s), and the sky was fabulously clear!  Sometimes it's cloudy during the programs, and I show them how to use it indoors, and then show the planetarium app Stellarium up on a project to familiarize them with the night sky.  But nothing beats looking through the eyepiece at something yourself!

Before the program started, I was sitting in the audience chairs and chatting with some participants when two middle school-age girls came bounding in.  One of them asked me, "Are you the professional astronomer?" I said "Yes," and she proceeded to give me a giant hug!  She was so excited so meet an astronomer because she loved astronomy so much.  She got a telescope for her birthday one year, but it was accidentally dropped on their first night out, so she didn't get to look through it!  So she was excited to check these out.

First, I went over how the telescope worked and the different parts and pieces.  Then I did a demonstration of how one uses the finderscope to find an object, and then look through the eyepiece to get it centered and focused.  Finally, we took all of the scopes outside (usually the library hosting the program gathers scopes from around the county so that we can have multiple going at once), and set them on tables in the courtyard.  There were a lot of lights, trees, and tall buildings, but the waxing gibbous moon was high, and Mars was easily visible as well (although very small in the scope these days!).  The StarBlasts are very easy to use -- just plop on a table, point, and look.  I nearly always recommend them when people are looking for a telescope for their kids, or want something really simple and cheap to get started with.  Despite the price and small size of the StarBlast, they deliver pretty good views for a starter scope - much more satisfactory than cheap refractors.  You can see open clusters, some bright large nebulae, and the moon quite nicely with them, as well as the rings of Saturn and the moons of Jupiter.

After practicing with the moon and Mars, we all went back inside for hot cocoa and cookies.  It was a fun evening!  I always love doing these events. 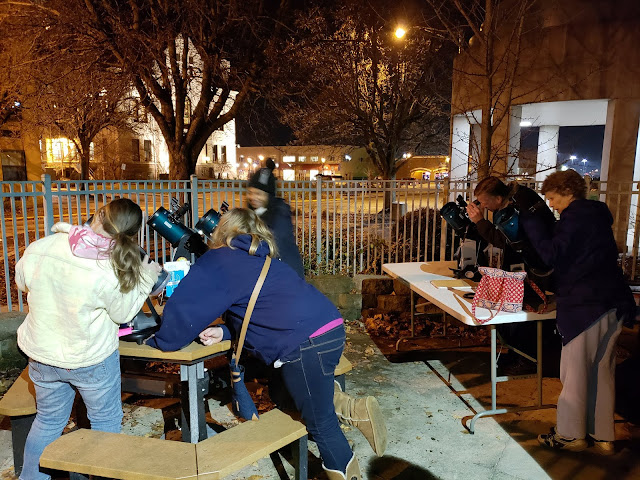 Posted by AstronoMolly at 7:02 PM

Email ThisBlogThis!Share to TwitterShare to FacebookShare to Pinterest
Labels: Outreach