Last night was gorgeous!  And tonight was originally supposed to be clear too...

As of last night, the Clear Sky forecast said it would be clear tonight.  Then this morning, it decided it would actually be pretty cloudy, but the other four forecasts I check all said clear, even the most pessimistic Clear Outside one.  All day they said this!  So I packed up my cameras, made dinner quickly, and got out to the observatory by 6:30.  It was already dark, but the Crab Nebula wouldn't be high enough until 7:30 anyway.

But staring around 5 PM, the "civil" weather forecasts (as opposed to the astronomy ones) were pushing the hour that the clouds would clear out back, hour by hour, until now it says 10 PM (I'm sitting in the warm room at the observatory writing this).  I've got my Nikon D3100 clicking away hoping to watch the clouds clear, but most likely that timelapse will be boring.  I'm at least taking dark frames on my Nikon D5300, since it's 29 degrees outside, and I have a lot of darks at 30 degrees but not a complete set.

I poked my head outside at 9 PM, but nope!  Still a thick blanket of clouds.  And now the civil weather apps are telling me it won't clear until midnight!  All righty, time to pack it up...Darn!  Hopefully another opportunity comes soon.  Time to go catch up on some sleep.

And since you took the time to read this sad little post, here's a meme. 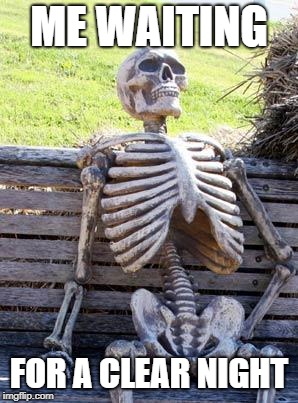 Posted by AstronoMolly at 5:57 PM