So there I was, sitting at my desk still trying to process my comet images from last weekend, when I saw the thick blanket of clouds that had been covering us begin to thin about a bit.  I checked Clear Sky, and it showed that it would clear pretty substantially!  The local forecasts agreed, so I quickly threw together a peanut butter & jelly sandwich for dinner, got into my warm clothes, grabbed my camera bags and related gear, and dashed out the door.  There was still some fog floating around from the rain we had over the past few days, but I figured it would clear once the temperature dropped more.  But boy was I wrong!!

I got out there about 6, and the moon was high and about half full, but I figured I could get more more luminance frames and some in-focus green and blue frames on the Crab Nebula to beef up that dataset some and still have it be enough above the moonlight background to be fine.  But since it wasn't going to be up high enough until after 7:30, and there was still some thin fog around, I figured I could work on further fine-tuning the polar alignment on the new Celestron CGX-L that's in the memorial dome first.  But before that, I went ahead and got my Vixen Polarie set up with my Nikon D5300.  Earlier that evening, I got a reminder on my phone that I'd set a while back alerting me that Comet 46P/Wirtanen was passing near the Pleiades - perfect timing!  A clear night!  Hopefully.  I framed the image based on SkySafari, or at least my best guess - the comet had dimmed to mag +8.8, and it was too foggy still (and the moon was too bright) to see it in the subframes.

I figured I'd try to get the comet, the Pleiades, and the California Nebula in one shot with my 55-200mm lens set at 55mm!  So I let that go while I got the memorial dome set up for polar alignment.

I started with a regular polar alignment in SharpCap.  I had to crank up the exposure time to 2 seconds though, and have the gain at 300 with the histogram stretched, to get enough stars to plate solve.  The moonlight and the fog were killing me. 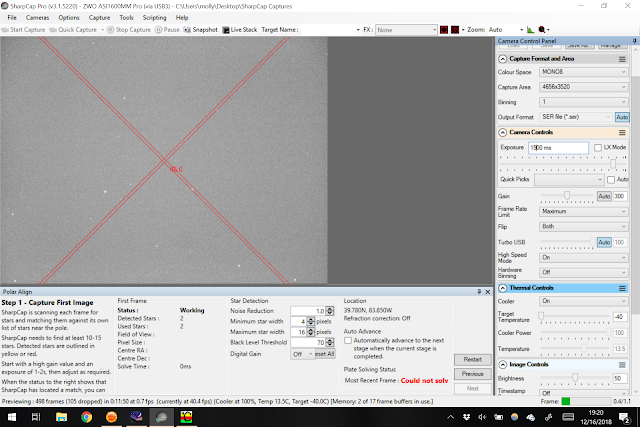 When I finally did get enough stars, it came back with a "fair" grade on the current polar alignment - off by less than half a degree, but still requiring some adjustment.   I expected to be closer than that, seeing as how I had just adjusted it the previous weekend to be as close as I can get with our bad seeing.  But I went ahead and adjusted it anyway.  My next goal was to do a drift alignment, which SharpCap doesn't have, but PHD does.  I hadn't tried using my ZWO ASI1600MM Pro on PHD before, but luckily it didn't take much convincing to get those two to talk to each other.  However, I don't think PHD could handle the 16 megapixel chip, and it doesn't have the ability to crop the image, that I know of.  It was slow at getting frames, and then it kept losing the star, even though I could see at least a few pretty easily.

Finally, I gave up trying to get PHD to work with my ZWO camera, so instead I pulled out my QHY5L-II guide camera and attached it to the guide scope, since I'd need it there anyway when it cleared up soon.  But I couldn't remember if the mirror diagonal I usually use with my older QHY5 camera put the QHY5L-II far enough away to focus, and I was having trouble getting the guide scope to see a bright star.  So I went to the moon stead, and after fishing around a bit, finally got the moon to appear in the guide scope.  This was further complicated by the fact that I didn't re-align the scope after the polar alignment adjustment (mainly because the fog was starting to thicken).  Moving the focuser didn't seem to help get the moon to be any closer to being resolved, however, so I swapped out cameras back to the QHY5.  I was working on trying to get that re-focused, but by then my fingers were cold, and the fog had suddenly become so thick that I could barely see anything! 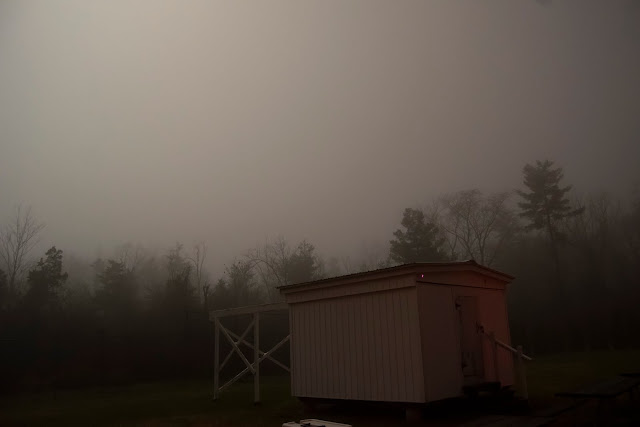 Seeing that were was no point in staying, especially since I had work the next morning and I had no idea when the fog might clear, I called it early, packed up, and went home.  What a waste!  The drive home took a while too, since the fog was so thick I had to drive below the speed limit, particularly because I usually need to use my brights on the dark country roads, which is not a good idea in dense fog.

Table of Contents
Posted by AstronoMolly at 5:11 PM