With springtime due to arrive any day now, the weather goes through its usual rough transition as winter grasps each day and refuses to let go.  Cloudy days can turn into sunny days at the drop of a hat, and vice versa, so when I saw it was sunny on Thursday, I waited until the last minute to decide whether to make the trip out to the observatory or not.  The forecasts made it look like there would be occasional clouds rolling through, but nope, it was clear as a whistle the whole evening!  In fact, I saw more stars than I've seen in a while from the observatory, meaning that transparency and seeing were much better than predicted.

I got out there a little after 7 with the hopes of taking flat frames before the sun set, but alas, the sky was darkening too quickly to get flat frames that were all the same exposure time, once I figured out how to use SharpCap's flats tool.  I'll just have to deal with vignetting in my images a little while longer.  I did mark the orientation of my camera to the filter wheel, and the filter wheel to the topmost screw on the club's refractor, with a silver sharpie so that I can align my camera the same way with reference to the telescope every time, so I can keep using the same set of flat frames.

Despite the beautiful skies (or maybe because of them), knowing that luck can only extend so far, I faced a number of other challenges this evening.  After I got the camera attached and marked, I slewed to Dubhe, the star on the top outermost edge of the ladle of the Big Dipper, so focus the scope.  I had a hard time finding the right camera settings that would let me easily see the diffraction spikes from the Bahtinov mask focusing aid (see my little blurb on this here), so I switched to the FWHM focusing mode in SharpCap (SharpCap has some really helpful focusing tools, by the way!) and used that to achieve focus by minimizing the size of the star.  This took a while, especially because even though I finally bought a USB 3.0 extension cable to connect my USB hub to my tablet, which now means I have USB 3.0 all the way through from my camera to the computer, I was still only getting less than a frame per second viewing speed.  I'll have to work on figuring that one out.

My next blockade came with calibrating guiding.  I slewed over to Regulus to calibrate PHD, since it says it will have the least amount of guiding errors if you calibrate on a star between -20 degrees and +20 degrees in declination, and I had such trouble guiding on my last trip.  I had it auto-select a bright star in the region (I slewed a little away from Regulus so that it wouldn't swamp the sensor), and it started calibrating.  But the star didn't move!  Calibration involves PHD moving the mount west, east, north, and south by different amounts to see how the star moves so that it knows how much and in which direction to pulse the mount so get the guide star back into place while it's guiding.  (See this post for more on guiding).  So you will normally see the star move during the calibration process.  I turned on my imaging camera to 30s exposures, and yes, the mount was indeed moving!  So I put the cover over the guide scope, aaaaand what I thought were stars were actually hot pixels!  Usually they're a little easier to differentiate from the stars.  I didn't have a set of dark frames loaded into PHD for my guide camera because I've had issues with it doing the dark subtraction wrong and the image turning out all gray, but I went ahead and took another set of dark frames anyway.  About halfway through that process, I accidentally hit the spacebar on my tablet, which hit the "stop" button and cancelled the whole thing!  So I had to start over...It worked this time, and all but one of the hot pixels disappeared.  So I calibrated (which went very quickly since I was looking so far south), and then slewed back over to M81 & M82, my target for the evening.  My plan was to get the rest of the RGB data I didn't get to collect last Saturday.

I set SharpCap to take repeating exposures so I could center M81 & M82 the way I wanted, but I couldn't see them at all, so I turned up the gain all the way and did 30s exposures to center them.  This took forever.  Finally I got them where I wanted them.  (I really need to learn how to use AstroTortilla, a plate-solving program where you tell it where you want the FOV, and it uses star patterns in the image with shorter exposures to center your telescope!)  I started acquiring the red images and waited for the first one to come in so I could see how it looked.  Well, it looked out of focus - there's always the risk of something moving ever so slightly when you slew the telescope a fair distance across the sky. 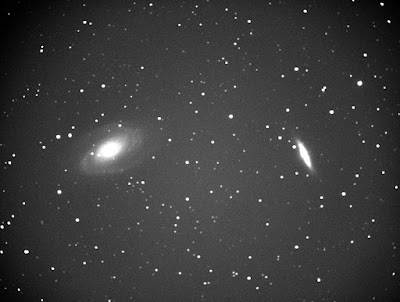 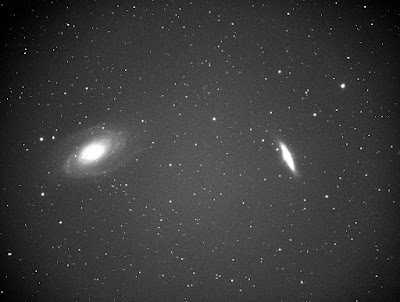 So I took a screenshot of the coordinates where I had the scope set to (I control it from the computer - way easier than moving through menus on the hand controller!) and slewed to Dubhe to go through the whole rigmarole I went through earlier in the evening to focus.  Finally, I slewed back to the coordinates I had saved, which got me close but not exact, so I had to adjust it a little.  But this time, I used Sequence Generator Pro's Frame & Focus routine, and SGP has a tick box called "stretch the histogram," which will stretch the histogram of the preview image on the screen so that you can actually see things.  This let me take only 4s exposures, so centering the image went waaaaay faster.  Remind me to do it in SGP from now on. Finally, an hour and a half after I got started, I was ready to image.

I acquired 7 more red frames (since I had gotten 8 last Saturday and I wanted 15 total for each channel), and when I got back to swap filters, I realized that I didn't move the dome enough earlier, and part of the scope's view was cut off.  So I lost a few red frames and had to re-take them.  But it turns out I lost more than I thought, so I only wound up with three red frames. 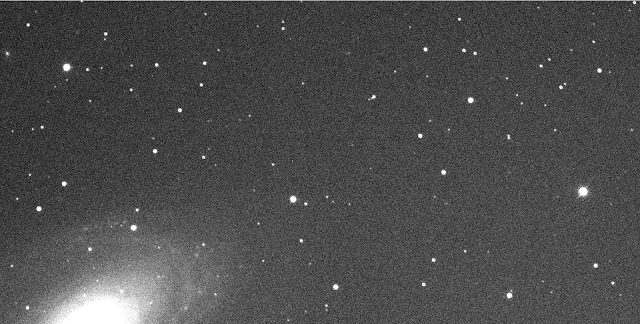 The dome cut off part of the scope's field-of-view - notice the diffraction spikes around the brighter stars.

After that, I changed to the green filter, and those went off without a hitch.  But after the greens were done, it was time to do a meridian flip, since M81 & M82 had crossed the meridian that divides east and west.  Equatorial mounts have to flip around for each part of the sky in order to keep the telescope from hitting the mount.  Doing this always means adding a lot of extra time - usually I have to re-focus again afterwards, and it doesn't always go back to the exact same spot in the sky, so I had to re-center the targets again.  But first, I had to deal with another problem: the guide camera fell out of the guidescope while the mount was flipping around.  This meant that I had to re-calibrate, since it would be impossible to get it back into the exact same orientation it was when I calibrated earlier.  I didn't want to slew all the way back over to somewhere south, so I just calibrated where I was at.  It worked just fine.  In fact, the seeing was good enough that guiding was more accurate than usual - I could see the pattern of the periodic error in the mount, and I was getting nearly only 1 arcsec of error, which is great for this area. 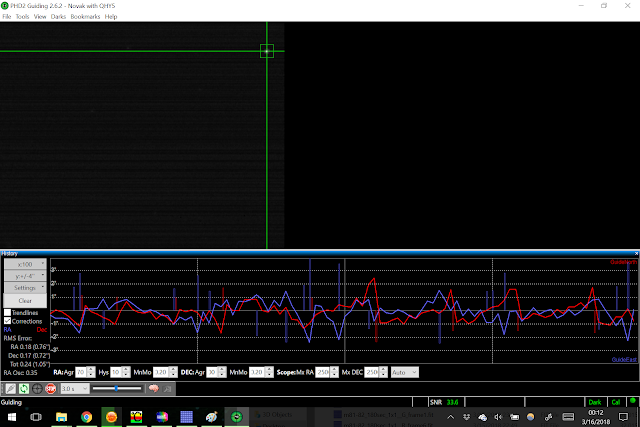 Not the best guide graph there ever was, but not bad...and good enough for how large the FOV of my camera + telescope combination is (1.3x1 degrees)

The blue frames went off without a hitch, and then I finally got to pack up and go home around 1:15 AM (I had only planned to stay until midnight, but I reaaaallllyyy wanted to get the rest of the frames I needed to make a complete image).  I got to sleep around 2 AM, and still had to go to work the next morning!  I didn't feel all that tired on Friday, but I had a very difficult time typing, either on my phone or my computer - I kept making lots of mistakes.  But I powered through!

I've gotten good at stacking LRGB images in DeepSkyStacker (post on that coming soon), but post-processing in Photoshop proved to be a challenge.  Color balance was difficult.  But the synthetic flats procedure I recently learned worked really well (post on that soon too).  I'll eventually write a post on the post-processing process, but here's a quick rundown: 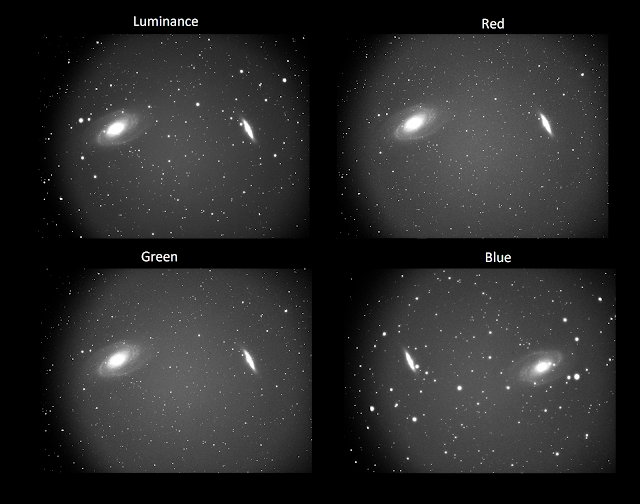 These are the raw FITS files for each color channel.  They look blown out, but they're not - the FITS viewer I use (AvisFV) stretches the histogram a bunch, or else you wouldn't really be able to see them.  Blue is reversed from the others because I had to do a meridian flip. 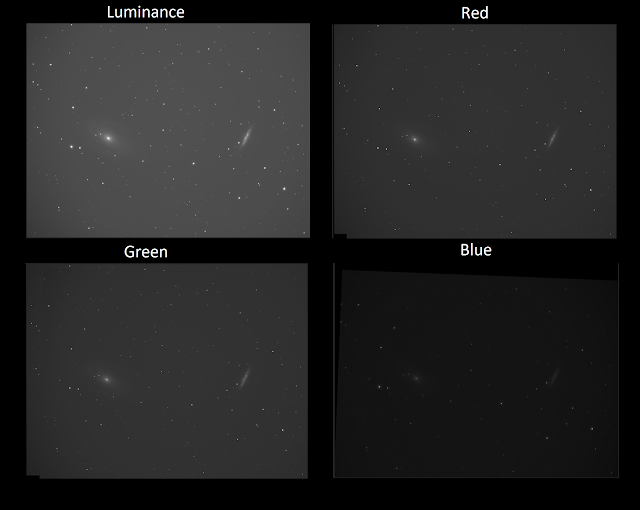 After stacking in DeepSkyStacker, saved as 32-bit, and imported into Photoshop.  Notice that DSS aligns them (I'll explain how to do this in a future post) 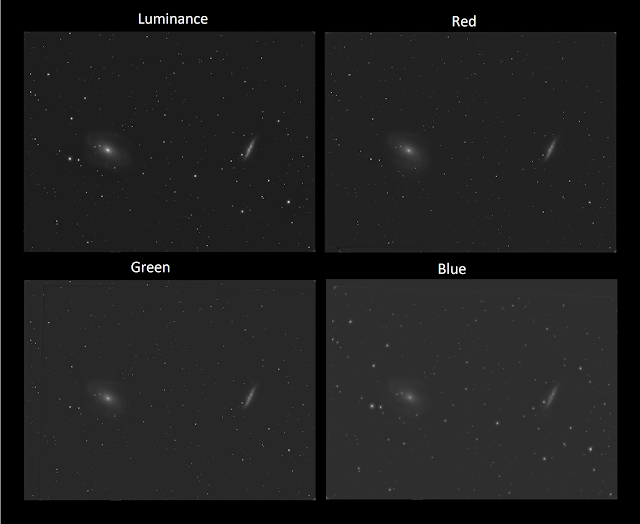 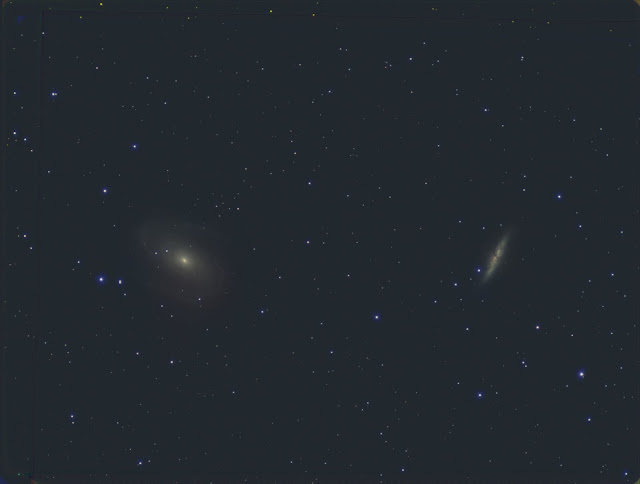 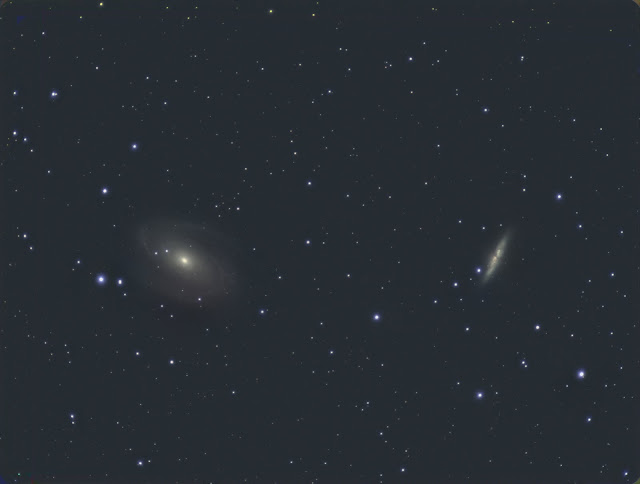 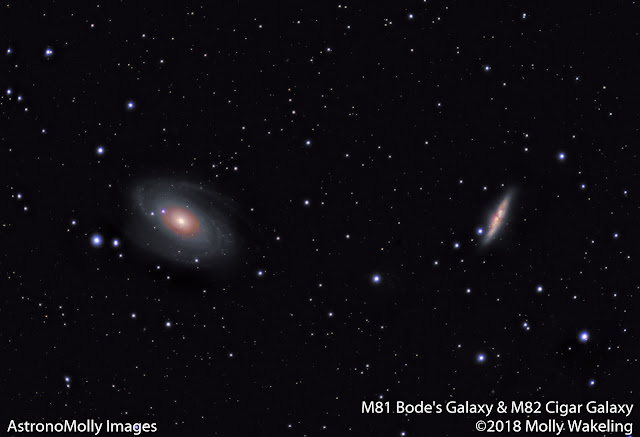 I still didn't manage to get the red hydrogen gas being ejected from M82, but hopefully someday...I'll need to take much longer exposures.  Or use a hydrogen-alpha filter :)

Pretty excited about this camera and my increasing skill level!!

Table of Contents
Posted by AstronoMolly at 11:15 AM