The forecast coming up on Saturday night was uncertain - cloudy, clear, clouds at 6 PM gone by 8 PM, clear until 11 PM and then clouds...none of the forecasts agreed, and when that happens, there's sure to be at least a few thin clouds floating around.  There were, but they mostly stayed toward the horizon, so a dedicated few of us from the club layered up to brave the cold and do some astronomy, as well as prepping for next Saturday's Messier Marathon.  (The Messier Marathon is a clear night in mid-to-late March when a dedicated observer can power through all 110 Messier objects in a single glorious night).

Due to getting sidetracked spending the whole afternoon tearing my house apart in search of my Raspberry Pi 2 that I need for a workshop I'm attending this week, I didn't leave the house until sunset, so it was dark by the time I finished setting up.  I had hoped to go out early so I could take some much-needed flat frames (see this post about what those are good for), but I forgot my silver sharpie to make index markings of where I took them anyway.  (All of your gear needs to be the same orientation every time if you want to use the same flats).  I need to get like a LED tracing tablet or something.

I spent the drive out to the observatory contemplating what target I wanted to shoot, and I finally settled on the Cone Nebula, which I have not yet imaged.  It was a risky decision, since I wasn't sure how well it was going to show up or how exactly to orient the image, since the view I see in SkySafari (the astronomy app I use to know where things are) can't tell me which way my camera is oriented with respect to the object.  It was also already across the meridian, meaning it was headed quickly towards the most light-polluted area of sky to the west of the observatory.  But I figured I'd give it a shot anyway.

After spending a while making sure I had good focus and then getting it centered exactly how I wanted it, I was finally ready to start imaging.  I had to take 1-minute-long subframes in order to see it, so centering the image took a while.  (And even then, I had to blow out the image just so I could kind of see the Cone).  I calibrated guiding, started the run for 5-minute exposures, and went inside.

Well, before I went inside, I took a few peeks through the club's 20-inch Dobsonian that the other club members present had pulled out - we looked at M51 Whirlpool Galaxy, M65 & M66 (part of the Leo Triplet), and M42 Orion Nebula, and they looked at a few other things while I was setting up.  M51 showed the two cores quite nicely, and if you used your imagination you could just see the spirals.  M65 & M66 had fuzzy shape to them and looked nice together.  M42 had its usual greenish cast, with the Trapezium nicely resolved in the center, with the giant curved dust lane of M43 just visible against the star that lights up that region.

I came back out 30 minutes and a cup of hot cocoa from the Keurig later to find that guiding was a mess - all of my images had some motion in them.  I stopped and re-started guiding, but was still having troubles, so I finally gave up and decided to image M81 & M82 instead, a photogenic pair of bright galaxies up north in Ursa Major.  After taking much care to get them centered exactly where I wanted them, I went to re-calibrate guiding, and PHD gave me a warning about attempting to calibrate north of +20 degrees declination, since when you're pointed north using an equatorial mount, there is not much motion in the declination axis, which can cause problems with calibration.  But I had already spent so much time centering the image that I went ahead and calibrated anyway.  It worked all right.  I took 20x3-minute subframes in luminance, and then 8 in red (I didn't want to be up too late), and then I started 8 in green and went inside, but when I came back out, the mount was hitting the pier!  The Losmandy Gemini mount that the club's memorial telescope has can go quite a ways past the meridian, so I was hoping to finish before it hit a hard stop, but that didn't work out.  So I did the meridian flip, re-centered the image, had to rotate the camera since it had gotten bumped, re-focused as a result of that, and then finally re-started the green frames, only to have guiding not work (you can flip the calibration without having to re-calibrate).  It was weird - the graph that shows the corrections that PHD is sending to the mount was totally flat, which would normally indicate that maybe the image coming from the guide camera wasn't actually updating, but when I bumped the mount, it sent a correction command (albeit a tiny one).  But I had previously been getting upwards of 1.5 arcsecs of RMS error, a measure of how much PHD was having to correct the mount, and there was no way it was even possible to be flat like that(it would have require perfect atmosphere conditions and no mount tracking errors).  At that point, it was already nearly 1:30 AM, and I had to get up and go to church the next morning, especially since it was Girl Scout Sunday and two of the girls in my troop were receiving a religion award they had earned.  So I packed everything up and headed for home.

To add to this underwhelming night, I left the observatory at 1:45 AM and got home at 3:15 AM - thank you Daylight Saving Time!  Ugh.  I only got 4 hours of sleep, and that was with skipping a shower.  I may or may not have drank coffee during Mass...

If nothing else, I did get a usable stack of L images, although I don't have flat frames for them.  I cropped the image to remove at least some of the vignetting.  It looks promising, though. 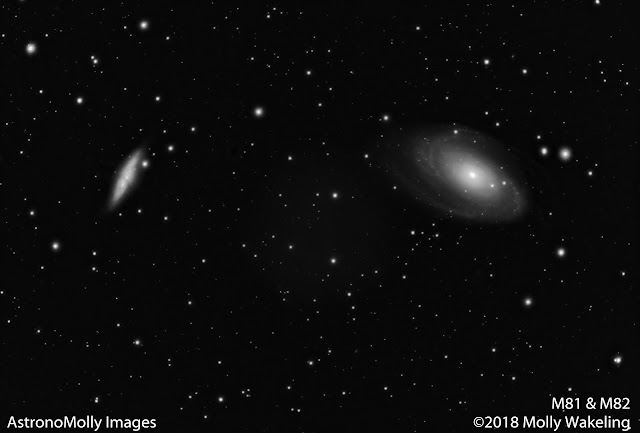 Nights like this are a good reminder to all that astrophotography is hard!  There are a lot of things that have to come together in order to successfully make an image.  But if you persevere, great images will result eventually!

Posted by AstronoMolly at 12:29 PM