It has certainly been a cold, cloudy winter this year!  I've only been out eight times since winter began, and one of those was an outreach event.  The last time I was out imaging was over a month ago, so I'm glad to be back!

And I'm especially glad because I have a new camera!!  After saving up for the past year or so, I have finally saved enough to buy the ZWO ASI1600MM Pro for $1,280 (that's the low end for astrophotography cameras!)  It arrived on Wednesday.  Now, the rule in astronomy is that once you get a cool new telescope or a fancy new camera or eyepiece or something you're really excited about, you are bound to have clouds for at least a week or two.  However, I was strategic in my timing: it has been cloudy here for the past few weeks with lots of rain, and now that it was finally cleared a bit, the moon is full.  But!  The full moon gives me a chance to go test the camera to make sure everything works and get some preliminary results on it.  I just had to choose a bright target. 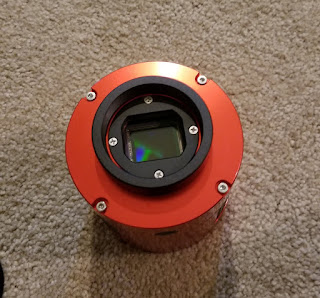 So, of course, I went with the classic first-light target: the Great Nebula of Orion, Messier #42.
I'll get into the details of this camera in a separate post soon.

The weather was cold, hovering around freezing, but there was no wind, so it was tolerable with a sufficient number of layers, as well as my new snowboots paired with my thermal and wool socks.  The Asian beetles inside the memorial dome appear to not have reanimated in the recent spout of warm weather we've had, although there were a few moving flies inside.  The carpet squares on the floor were soaked from the rain, which must have leaked in from somewhere, but the electronics all seemed fine.

Setup went smoothly, thanks in part to some at-home setup - before I left, I scrambled to get the drivers updated and tested.  The ZWO English software site was down, but I managed to find the Japanese version of the software page, where I was able to locate both the latest camera driver and the ASCOM driver, which were necessary to connect this new camera model to my computer.  (I had older versions of both drivers that I had used last May at the Texas Star Party to run the ZWO guide camera I borrowed from my minion Miqaela).  Crisis averted! 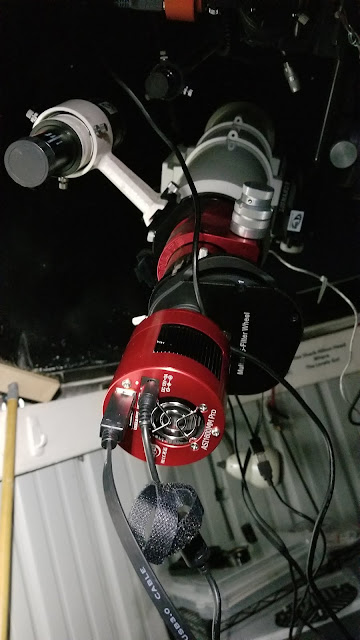 My new ZWO ASI1600MM Pro attached to the Vixen 140mm refractor I borrow from my astronomy club.

The atmosphere wasn't great - I was getting around 2.8 for the FWHM of the star I was focusing my guide camera on, and the guiding was bouncing all over the place with a RMS error bigger than 2 arcescs, which lead to unstable guiding (even with 3-second exposures) that squished my stars this way and that way on all of the subframes, but being under a full moon anyway, I was less concerned with that because the main goal was to test out the camera.

I first tried the Horsehead & Flame Nebulae, but they were not bright enough to shine through the moonlit sky, even with a 5-minute exposure.  So next door to the Orion Nebula I went!  I decided to take 60-second subframes since I didn't want too much background light from the moon.  I also took a series of 5-second luminance subframes to composite with the 60s ones so show detail in the core  of the nebula, which was waaaay blown out in such a sensitive camera at 60 seconds. 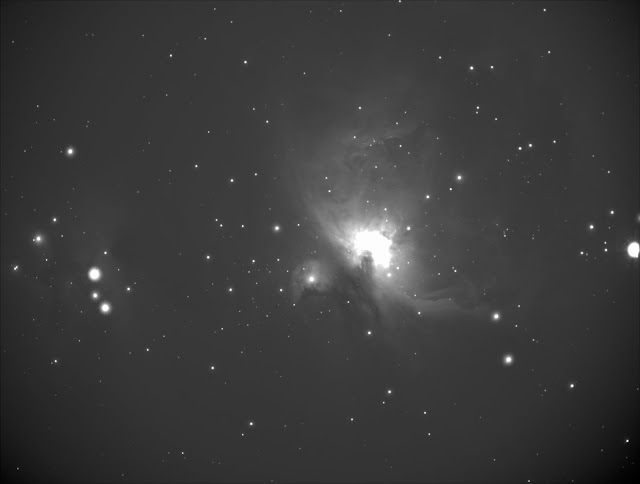 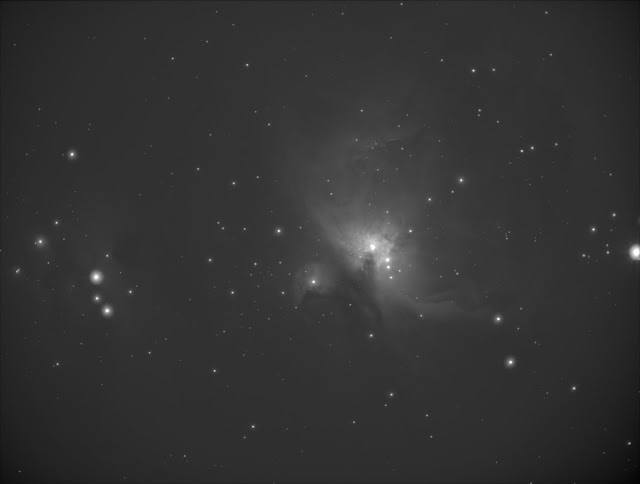 I tried a technique from this video by David Rankin to blend the two luminance frames in order to capture the dimmer areas and finer detail of the 60s image with the detail in the brightest parts of the nebula of the 5s image.  It worked quite well, and was pretty easy!

After stacking and stretching the red, green, and blue channels, I combined them into one image in Photoshop (I will eventually write a tutorial on this once I have more practice), added the composited luminance frame on top and set the layer type to Luminosity, and set to work tweaking the Levels, Curves, and Hue/Saturation to my liking.  The colors came together amazingly well - I used my new Astronomik LRGB Type 2c filters, which say they are designed to be color-balanced in sRGB space, the standard color space.  That definitely proved to be true - I had to do very little adjustment of the colors, really just reducing their presence in the background (from the moonlight and light pollution).

All right, here it is! 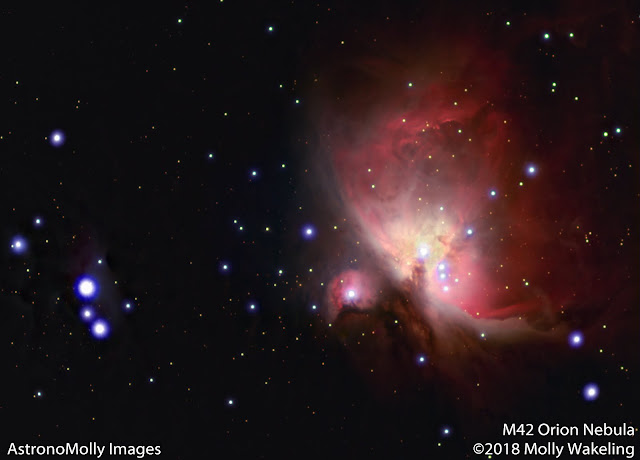 The fine details in the nebula clouds are so amazing!  No longer are they lost due to noise.  I didn't have to do any noise reduction on this image, even with the short exposures.  I feel like I can reach out and touch it!  I also saw that if I crank up the exposure a ton (which makes it look kind of terrible), I also caught a lot of the very dim background of this nebula, so maybe I'll do some much longer exposure images of it as well and composite those together to make a very high dynamic range image.  Also, the giant blue stars are a result of using an achromatic refractor-type telescope, so at some point I'll need to image this again with my apochromatic Borg to get some better-looking stars.  But anyway, despite a full moon, I am super happy with this image, and can't wait to see what else I can do with this camera!  Time to take things to the next level!


Table of Contents
Posted by AstronoMolly at 10:08 AM