After a year of cramming my telescope gear into my little 2005 Ford Focus, I finally decided it was time for an upgrade.  I loved my zippy little Focus, but I needed to think bigger!  Earlier this year, I bought a 2017 Ford Escape, which I am totally in love with.

However, it has one fatal flaw - SO MANY LIGHTS.

Whenever I go to the observatory or to a star party, the armies of Rohan appear because they saw that the beacons were lit.

With my Ford Focus, there was only one interior light that had a switch I could set to off, and I could turn off the headlights too.  So when I was at the observatory, I could open my car door to grab something, and it would stay totally dark.  Cars today, however, have no such luxury.  When I open the door to my Escape, even if I don't turn the car on, the daytime running lights, all five interior lights, the license plate lights, the "welcome lights" under the side mirrors, and the colored LED accent lighting around the cupholders, inside the doors, at the driver's and passenger's feet, and in the back seat all turn on, turning night into day.  I assume that "normal" people like this, but my fellow dark-adapted stargazers in the astronomy club don't appreciate it at all.  Car lights at a star party are a recipe for disaster, and a sure-fire way to be chased out of the field with (red) torches and pitchforks.

Before you ask, no, there is no switch to turn off the interior lights, turning off the headlights means that the daytime running lights are just on all the time (and they're white LEDs that in my opinion are brighter than the headlights), and I'd probably have to empty half the fuse box to turn them all off, which would probably break this high-tech car.  So what's a dark-adapted girl to do?

I scoured the forums for solutions, but none were terribly useful - some people take out fuses that only have one or two and some tried to get theirs modified for "police mode" with varying levels of success at the dealership.  But then, I got a better idea.  DIY red filters!  I call this solution "red countermeasures."

I quickly found some movie-industry-grade red filters (13% transmission) that were truly red, as opposed to pink (which you get if you coat clear plastic in red) on B&H Photo (here). It was less than $25 for two 20x24" sheets, including shipping.  I carefully measured the size of every light in and on my car (excluding the LED accent lighting - that would be difficult to cover, and it below the level of the windows anyway and not as bad from the outside), and cut the filter paper up into rectangles.  I also got a roll of velcro tape.

For the interior lights, the license plate lights, and the side mirror lights, I cut small pieces of the velcro and stuck them around the lights.  I get weird looks from my friends when they see it, but I think it's a fair trade-off. 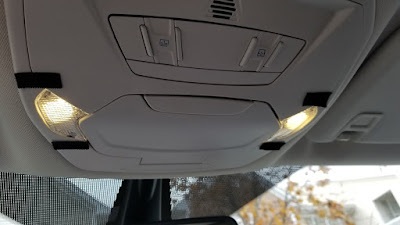 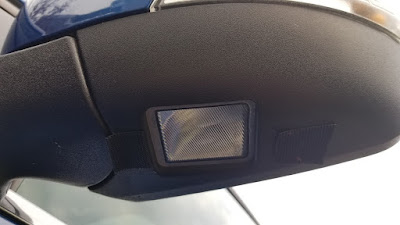 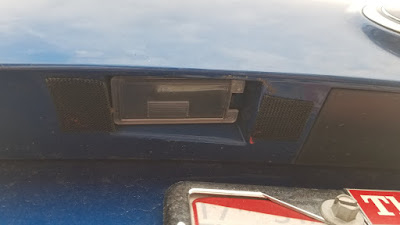 So far, the outside velcro stickers have survived thousands of miles of road tripping, rainstorms, dust plumes of dirt roads, and four trips to the car wash.

The red filter rectangles have matching velcro stickers, and they attach and detach quite easily!

The ones for the headlights were a little trickier.  First, the filter paper squares I got weren't quite long enough to cover the entire headlight, so I had to cut two pieces and tape them together.  I originally had envisioned using magnets with adhesive backs on the filter paper and adhering it to the car that way, since I didn't want to put velcro stickers on the body, but then I discovered that car hoods are not magnetic.  (I probably should have known this.)  So instead, I put a magnet on one end of the filter paper that attaches to the quarter panel (which is magnetic), and for the other end, I tucked a velcro sticker into the side of the front grille, and you can't see it unless you look really closely.  It has also stayed on really well through carwashes, rain, and high freeway speeds. 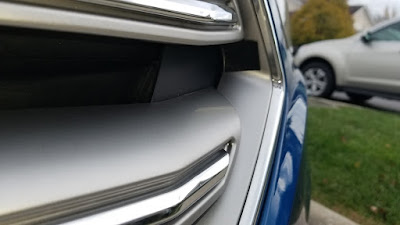 Unless it is super windy (like at the Texas Star Party in the early evening), the headlight filters stay on quite well.  Sometimes I've had to use ticky-tack for extra adhesion on breezy nights.  But otherwise, it's been a great and simple solution!

To store them, I tuck them all into a gallon-size Ziploc bag that lives in the seat pocket of the driver's seat.  I labeled all the pieces ("T" for trunk, "LP" for license plate, "F" for front, etc) since they are different sizes with a black sharpie. 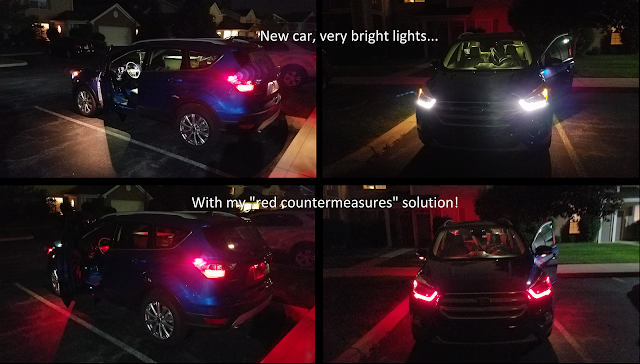 The lights are dimmer in person than they appear in the picture.


Table of Contents
Posted by AstronoMolly at 11:55 AM