Two nights out this week - yay for long weekends!  I could only stay out until about midnight because I had church the next morning, but with darkness falling so early these days, that still gave me several hours to work with.

I was a little late getting out to the observatory - about 6 PM - but joy of joys, I wasn't alone!  A few of my fellow sky-people were there from the astronomy club!  It was warm for a late fall evening (nearly 40 degrees F), so a few had set up a Meade 127mm apo refractor that belongs to the club, with a Skyris camera for "electronically-assisted viewing."  As usual, however, it was put away by the time I finished getting everything set up and rolling.  But it was nice having other people to chat with in the warm room after I was set up.  I'm usually out there alone.

My new Astronomik LRGB filters are on their way, so I decided to take some luminance data on something with my CLS (light pollution) filter to knock that out of the way.  The moon was nearly at first quarter toward the west, so I needed to keep to the east.  I was going to do M81 & M82, since I'm dying to capture the rich red hydrogen exploding out of the core of M82 that has eluded my red-insensitive DSLR, but there was a tall tree limb blocking it.  So I decided to do the Pacman Nebula instead, NGC 281.  It's an emission nebula in Casseopeia, about 9,500 lightyears away in the Perseus arm of our humble galaxy.  I imaged it recently with my DSLR on its last night alive.

Setup went smoothly - syncing and focusing on Capella, calibrating PHD guiding, and after a few 60-second test images to get it centered where I wanted it, I started a series of 10-minute frames, and then went inside to chat.  I went out about every 45 minutes to rotate the dome.  After 10:30 PM, constellation Orion was high enough for me to want to slew over there and take more data on the Flame & Horsehead Nebulae, but I decided to not be impatient this time and stay the course and get a lot of frames on the Pacman.  It was time for a meridian flip, so I tried out a feature I just recently found in the computer control app for Gemini mounds: "perform meridian flip."  It didn't work quite as I'd hoped, however - it took me to where it thought the nebula was, but it wasn't centered, and was instead down and to the right off the edge of the frame, like it had been before I centered it on the other side of the meridian.  Oh, well.  Even slewing to the same coordinates (I had saved a screenshot) didn't quite work.  It might work better if I actually aligned it with several stars instead of only syncing on one, but the couple times I tried on this mount, the first two stars would take, and when it slewed to the third star of my choice, it would like point at the ground.  So I gave up on that.  Anyway, I got the nebula re-centered (or close to it), and continued the 10-minute exposures.  When I packed up about quarter to midnight, I had 20x600s exposures, or 3 hours 20 minutes of data!  The histogram was completely separated from the left side of the graph, which is good (if part of the peak is cut off by the left end of the graph, then you are losing data), but it was still pretty close to it, nowhere near having too high of background light.

I went ahead and processed just the luminance frames to see how they looked.  I'm trying out some new techniques with stretching and applying the Carboni tools at different points in the editing since I keep enhancing the gradient that exists due to my lack of flat frames.  Also, weird dark areas are appearing around some of my brighter stars, an effect I haven't seen with my DSLR, which might be related to de-biasing of nearby pixels when a given group of pixels has absorbed a lot of photons.  Hopefully my future CMOS-chipped camera I'm saving up for (the ZWO ASI1600MM) won't have this.  Or it may be an effect of processing - I'm going to try some different stacking modes.  Fellow club members think it's because the Vixen scope is not apochromatic, but neo-achromatic, which means it still has the violet halos that achromatic refractors do, they're just smaller.  I see them on my DSLR, and the Carboni tools in Photoshop can clean it up well, but it doesn't quite work for grayscale images.  Also, the weird dark spots don't appear next to every star, and they look different than halos. 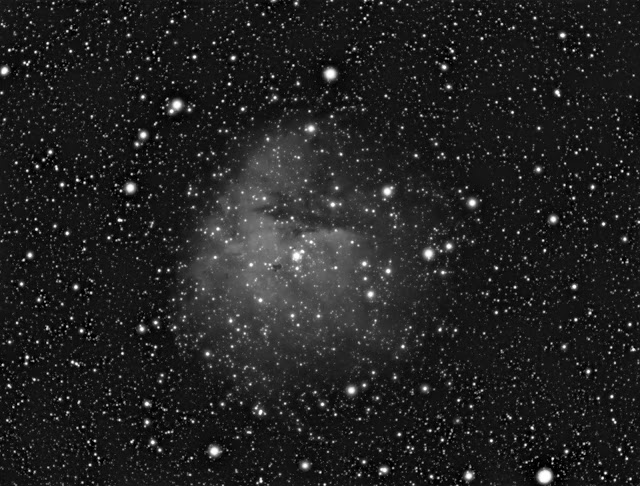 Actually, they're easier to see in negative (now as white splotches). 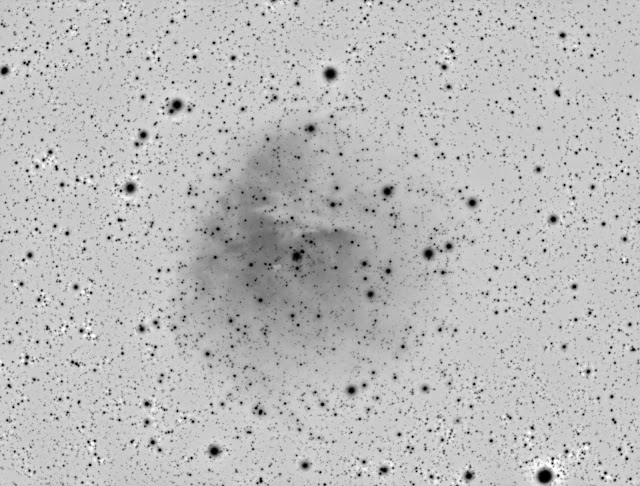 Anyway, I'm excited to eventually get some color on these images!  The luminance image here, despite its issues, shows amazing detail of some of the globules.  I'm really excited about using something besides my DSLR.  And the noise is practically non-existent, especially when I can run the sensor as -25 degrees C.  Speaking of cold, it was pretty bearable outside until I went out to check on things around 11 PM, and the temperature had dropped quite a bit all of a sudden!  And it wasn't just my imagination; I have data to back me up. 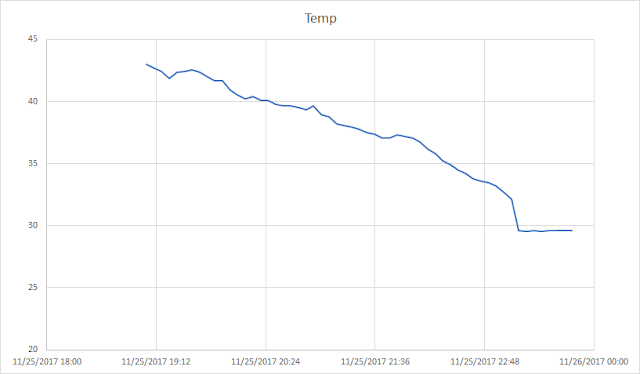 I use a USB digital thermometer to track the temperature - it's mostly important for when I'm using my DSLR so I can correlate light frames to dark frames at matching temperatures, but it's also helpful for context (like, "could the scope have had frost on it?") and for determining what the lowest temperature I can set the CCD chip to, since it can do only about 30 degrees C below ambient.  I have it set to record data in 5-minute intervals.

The moon is waxing, so sadly I'll have to take a short hiatus from imaging until about mid-December, when it comes up bright but late.  In the meantime, I'm thinking about setting up my 11-inch on the back porch so I can investigate what went on with the declination axis during the Hidden Hollow Star Party and see if it does it again.