After a few weeks of cloudy weather and being busy at work, I finally got out to the observatory again last night!  One of the few benefits of wintertime is much earlier darkness.  The sun set around 5:30 PM, and I scrambled to shovel down some food and grab my camera bag.  Thank goodness for the memorial scope out at the observatory - very little setup required!  My target for the evening: NGC 281, the Pacman Nebula.  I originally hadn't realized that this was indeed a northern hemisphere object until a member of my club posted his image of it.  Super cool wintertime nebula I've been missing!  It's in Cassiopeia, so it's up for quite a chunk of the year.

I've been imaging a lot lately with my borrowed SBIG ST-8300M CCD camera, but since it was cold and I didn't want to sit in the cold in the dome and babysit the camera (since I'm still getting used to using it, and I just cleaned my blue filter with some proper solution and need to check that it's working, which will take a little time), I just decided to bring my Nikon D5300 instead and make life easier on myself.  I'll do the CCD when I have a weekend night or something when I can stay out longer, and maybe it's above freezing.  At least there wasn't any wind. 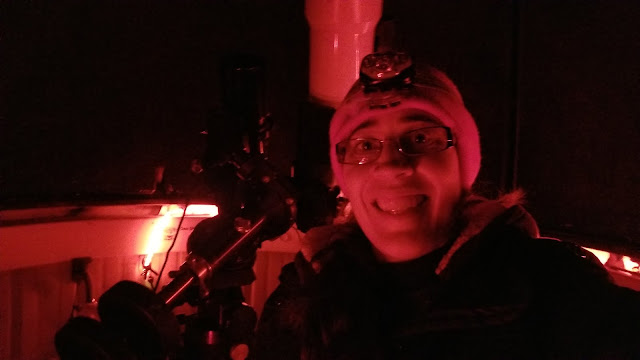 Also, I got my braces off Friday before last, YIPPEE!!

Besides the clouds, it was reasonably dark, and it was really strange to be two hours into my imaging session and having it be only 9 PM.  It was chilly - my digital thermometer said lower 30s, and then dropped to 29 before I left.  The park had a strong smell of rotting leaves, and it was very quiet, since the cicadas have settled down for their long winter's nap, along with most of the other wildlife, it would seem.

Except for the Asian beetle.  The dome was full of them.

If you aren't familiar, they look a lot like ladybugs, but have some subtle differences.  They can help get rid of pests, but they are also aggressive and will bite.  Apparently, there are a lot of them in my area this year.

If you know me personally, then you probably know that I have a strong distaste for insects.  Fortunately, ladybugs are the least freaky to me, so I put up with co-habitating with them in the dome.  It was a little eerie, however, with there being so many.  When I opened the dome slit, it shook the dome, and I could hear dozens of them pitter-pattering as they were shaken from their roosts.  When I smacked the lid of my camera case against the side of the dome, twice as many fell onto it.  A few fell onto my tablet while I was using it.  When I unfolded the camp chair inside the dome and shook it to dump out all the bugs, over 30 must have landed in a wide pile on the floor, and I had to swipe another ten or so off the seat of the chair.  Thank goodness it was dark...Also, the cold made them pretty inanimate.  None flew around, or really moved much at all.

After I got the scope aligned, my camera focused (I'm pretty much the only one that uses that scope, so it is just permanently very close to focus), PHD calibrated for guiding, and the nebula centered, I took some test frames to figure out what exposure time I wanted to use (I ended up going with 6 minutes - much more and the skyglow starts to get too high.  That, and I really didn't think I had any dark frames longer than that in my dark frame library at these temperatures from last year).  Once the images started going, and everything looked solid, I scurried back into the warm room, which had reached a nice warm 68 degrees after I had originally gone in there and turned the heaters on.  We have such an excellent facility!

I went out to check on things around 9:40 PM, and discovered that my tablet had shut down because the power cable had fallen out during setup and the battery had died faster in the cold.  After getting booted back up, I saw to my dismay that the last image had been taken at 9:21, so I missed out on about three images!  Oh well, it didn't take long to get back up and running.

Thin, high clouds threatened my evening, however.  I managed to get about 13 fair images of it before I finally gave up to the clouds and switched back over to the eastern sky, where it was clearer, to image the Pleaides Cluster, M45.   It came out pretty decently, if dim.  I tried stretching the histogram in Photoshop this time instead of processing it in DeepSkyStacker, and the noise came out much lower.  I didn't do a particularly careful job at the stretching, and I applied several of Carboni's tools (see this post), including space noise reduction, light pollution removal, reduce small blue/violet halos (the Vixen NA140ssf scope that is in the memorial dome is a "neo-achromat," which has less color aberration than achromats, but it's still there), and enhance DSO/reduce stars.  Hopefully I can image it again soon with the CCD camera and fewer clouds. 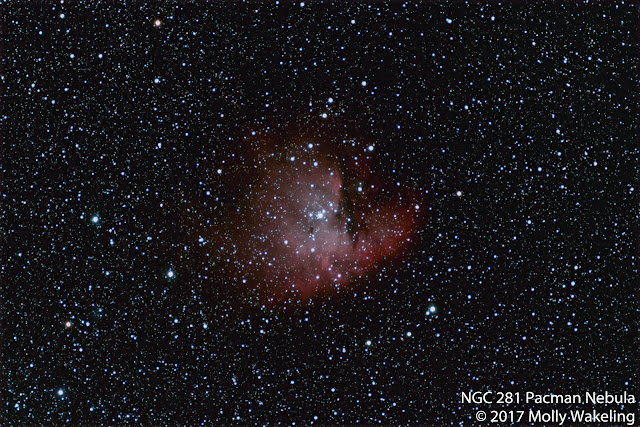 NGC 281 is known as the Pacman Nebula for its resemblance to Pac-Man of the classic arcade game.  It's a HII region - HII is a specific transition of hydrogen atoms that produces a characteristic red glow.  It spans about 40 arcminutes, which is a little larger than the full moon, and lies about 9,200 lightyears away from us in the nearby Perseus arm of the galaxy. 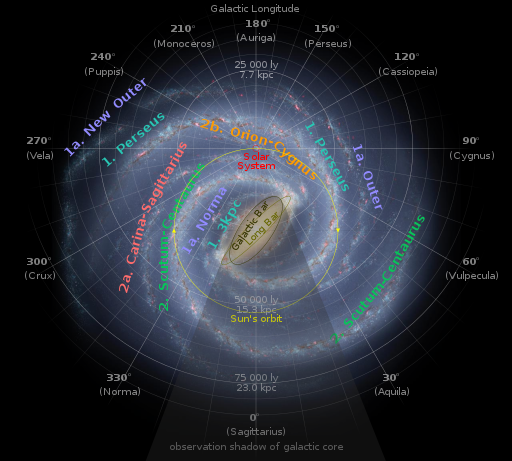 I started getting the munchies around 10 PM, but I had forgotten to bring snacks.  There isn't usually much food in the fridge (just soda and leftover beer), but I lucked out - there was half a store-bought apple pie in there!  I checked the date - October 21st, which I decided I could live with.  I ate it cold because I prefer the taste of cold apples to warm ones (we do have a microwave in there), and it was delicious. 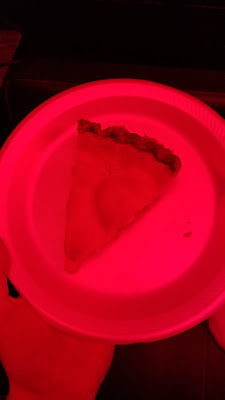 The red light makes it look more like a pizza or something.  Or radioactive.

I passed the time by scrolling through Facebook, reading my Astrophotography On the Go book by Joseph Ashley, chatting with one of my friends, and chatting on the phone with my sister, while checking the scope and rotating the dome every half hour or so.  Around 11:45 PM, I put all my layers back on and went to go pack up.  Not a bad night!  I'd meant to get 40 or so quality images on the Pacman Nebula and just focus on one target, but ended up doing two, which is fine.  The Pleiades one came out quite nice, besides the super-saturated stars.  I might need to play around with some interpolation or something so they don't just look like blotchy white circles.  It's hard to believe sometimes that stars are always point sources in the telescope when their light gets spread across so many pixels. 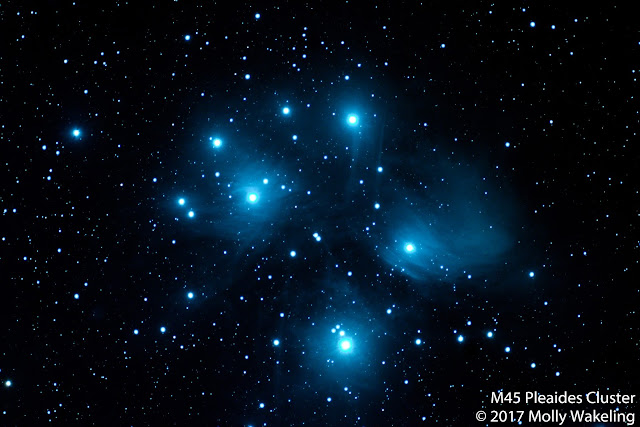 The Pleiades is an open cluster of about 1,000 stars, although only seven are easily seen, hence its common name "The Seven Sisters."  It lies 444 lightyears away.  The nebulosity around it is actually a dust cloud that is passing through it and reflecting the blue light of the hot, young (100 million years old!) stars.  It is quite lovely, and the dust can be seen with the eye under dark skies in large enough scopes.

In my haste to pack up, I forgot to take bias frames (more about those here), so when I got home, I got to work quickly setting up my camera to take them and some dark frames on my back porch.  I plugged everything in, through it out on the back porch, and went to connect BackyardNikon to the camera.  It wasn't connecting, even though I was sure I had turned the camera on.  The switch was set to On.  Puzzled, I pulled everything back inside to unplug and replug things.  When I pulled out the AC power and went to plug it back in, I saw that something was wrong with the plug.  It looked like it had crumbled. 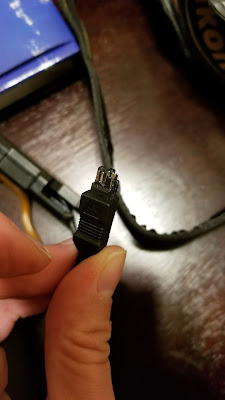 So I grabbed my other AC adapter and plugged it in instead.  No dice.  Then I grabbed my battery.  No power there either.  It looks like I had probably plugged in the broken adapter in the wrong orientation, since the pieces that prevent it from being plugged in wrong were gone, so chances are good that it fried.  I set it slowly on the table and went to bed.  It still didn't turn on in the morning.  Well, there goes some of the money I was saving for a good astro camera...

Posted by AstronoMolly at 6:09 PM