I spent the day giving one last go with my Celestron CGE Pro.  Quick recap: I got that mount back in May 2017 and brought it to the Texas Star Party, where it performed beautifully.  It also did a great job at Green Bank Star Quest in July 2017, delivering 8-minute guided frames at least with my C11 mounted on top.  But then at the Hidden Hollow star party in October of that year, it had some really bad guiding.  I put an eyepiece on it and saw that the stars were jumping back and forth as I slewed in declination.  RA looked buttery smooth.  I didn't get to pull it out again until the following summer, and over the course of the next year I tried out various fixes in the couple times a year I actually set it up.  I meshed the worm drive gear and worm gear closer together, which did help fix some wobbling I felt in the dec axis (I could physically rock the axis back and forth a bit), but didn't help the star jumping.  Finally, I took the dec axis motor box totally apart, discovered two things.  One, with a multimeter, I saw that the voltage was oscillating around 11.5-12V, while the RA axis held a steady 12.5 or 13 or so.  Second, with the motor completely detached from the mount except for electrical cabling, I could feel the motor pulsing rapidly in my hand, like something was sticking or rubbing on the inside.  The same happened when I plugged it into the RA electronics, which ruled out a control board or supply voltage issue. 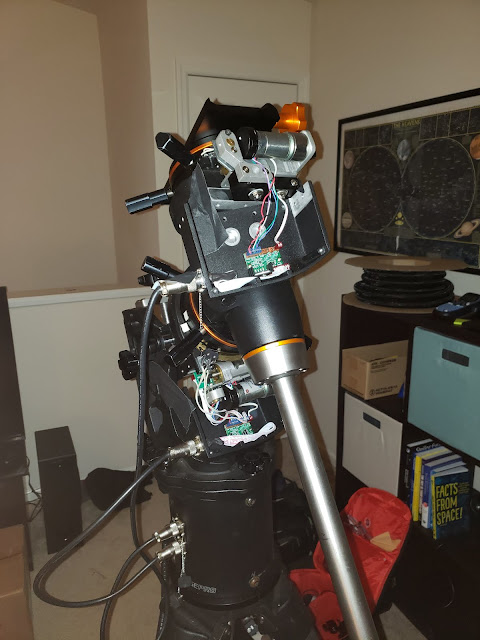 A couple months ago, I got a tip from one of my Astro Imaging Channel buddies to try a voltage step-up converter to supply the mount a little more voltage, like 13.5 or 14V.  But while I was preparing that setup today, I realized that my AC power connector, the one I usually use, was already delivering 13.5V.  So that wasn't the problem.  Something is definitely wrong with the motor.  I could get one of the few leftover at Celestron's warehouse, but it'll cost me $500.  And if you've followed the saga of my Celestron CGE-series mounts, you'll know I've already spent far too much money trying to get a functioning one!   So I'm going to try and sell that mount and my CGE to get some money to help fund an Astro-Physics mount.  I'm done messing around, I want a mount that works!!

Evening rolled around, and it was still partly cloudy out, but the forecast promised it would clear.  I re-did alignment and polar alignment in the meantime, and a star I had it slew to was quite close.  However, when I went to center a target in Sequence Generator Pro, it still wasn't getting closer to the target -- it was just staying the same distance away.  I had turned off the "sync" option the previous night in hopes that that was the cause of the mount not tracking well after a meridian flip or some target changes, since you have to un-do sync in the hand controller to sync on another target for Celestron.  There were two other options besides "none:" "scope offset," and "target offset." I tried scope offset, but it did the same thing.  Then I tried target offset, and it finally centered!  Woot!  I had a solution.

While I was busy making that change, the clouds suddenly evaporated, and the sky was totally clear.  Woo hoo!  Transparency wasn't great, however.  I just had to hope it would improve.  I started the sequence, and went back inside.

I checked back in on it around midnight before I went to sleep, which happened to be right when it was centering M31 Andromeda Galaxy, which I've been having trouble with.  The centering worked this time, woo hoo!  The first frame came in, and it looked fine, but during the second frame, I watched the PHD guide graph start to go off the rails in declination.  Even after I picked a new guidestar, which can sometimes fix that kind of drift, it was still running away.  So I went back into SGP and nudged the scope a little bit in dec, It was set at 0.5 degrees per second though, so it ended up being a bit of a jump.  But that fixed the runaway, woot!  SGP had some trouble re-starting the sequence, however, so I closed and re-opened the sequence, and it got off and rolling again.  I went to sleep.

Unfortunately, I had un-checked the "center target" boxes for several of the targets when it was having issues centering them, so my targets the rest of the night were not centered.  Rawr!  The Heart Nebula and M31 happened to center properly, but I deleted my data for NGC 2174 and the Rosette Nebula.

Both M42 and M31 had tracking issues after the meridian flip, and I saw log messages for SGP saying stuff about losing the guide star or being unable to settle the autoguider.  I did manage to get a couple of good frames on M31, but none of the M42 ones came out. 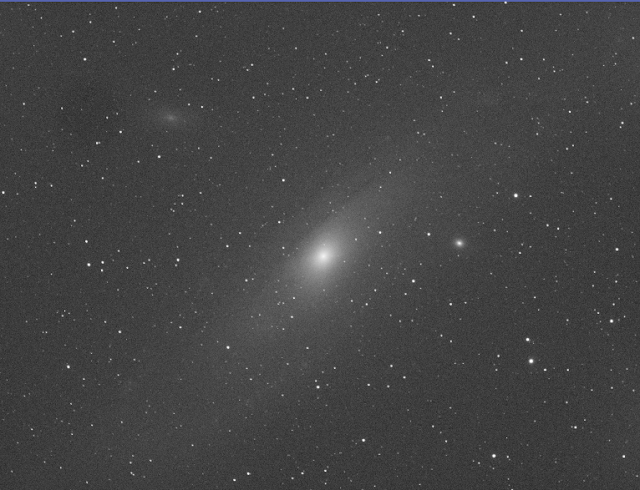 Hydrogen-alpha image of M31 -- the core glows bright at all wavelengths I guess!
If I zoom in, I can see some knots of star-forming regions toward the edges, which will hopefully come up in processing.