Lately, my astronomy club has started hosting outreach events at local breweries, which has been a lot of fun.  This one was at a brewery downtown, which is set up in a large, old warehouse - the type of brewery where you can enjoy your beer while looking at all of the vats, pipes, and gauges.  The weather promised more clouds in our unending pattern of clouds lately, but the astronomy gods smiled upon us (or perhaps enjoyed a few beers with us), and the sky cleared up!  The event was also a fundraiser - $1 for every pint goes to the club. 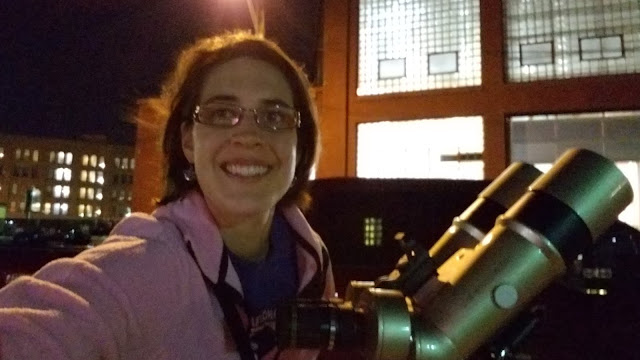 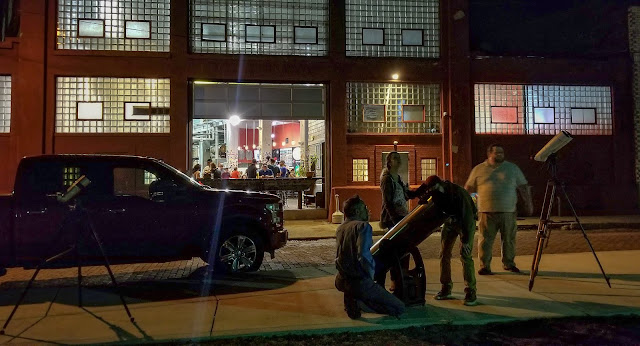 Since the clouds thinned out, and we had a nice crescent moon to punch through all the light pollution, we set up our gear - two Oberwerk binoculars (one of them mine - the ones on the left of the above image) and a Dob.  We had about 15 people come through while I was out there, and possibly more while I was still inside sipping on my Belgian cream ale.  Not only did we look at the moon, but we could just see the Orion Nebula as a brighter splotch surrounding the Trapezium, the tight grouping of four stars at the heart of the Orion Nebula. 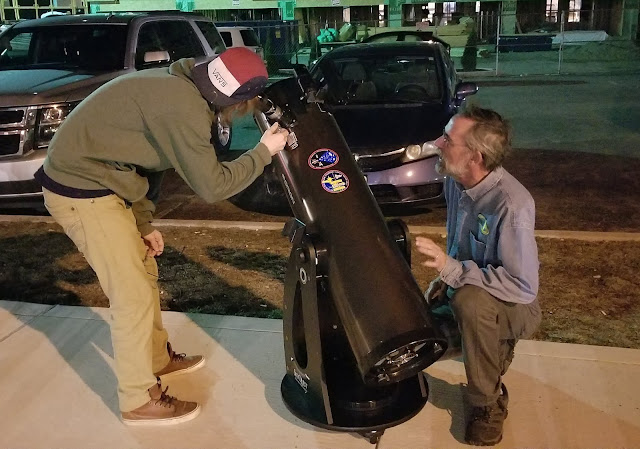 We passed out information about the club to a lot of people, and some said that they had come just for the event!  We may even get a few new club members as a result.  I was talking to another girl about my age, and mentioned how there are only a few other young people like myself!  She seemed surprised by this, but I also mentioned how astronomy tends to be a hobby of retirees.  I'm pretty lucky to be able to carve time out to go out as much as I do.  But with astronomy, you just pull out the telescope whenever you can, even if that's only a few times a year, or come to club events and borrow ours!  We were out there for about 3-1/2 hours, and it was a good time.


Table of Contents
Posted by AstronoMolly at 5:06 PM No comments: