Lucky me, another night out this week!  Looking at the forecast the other night, I didn't think it was going to happen, so I put my gear away, but then the weather cleared up for tonight!  The atmosphere wasn't promised to be great, but I don't need great seeing for the color data I need to take on M82, the Cigar Galaxy.  Then I'll just need one more night to get the hydrogen alpha so I can make a killer image, hopefully!  On top of this being a clear night, it's downright balmy at 44 degrees F!

I got out to the observatory around 8:20 PM, turned on the heat in the warm room, and got the dome set up.  Got my guide camera and main imaging camera plugged in, attached my super-awesome cable bundle, connected the cables to my computer and main power, and booted everything up.  It was still dusk, so I decided to see where the mount was at with polar alignment.

It was off by about an arcminute, which is fine but could be better, especially since this is a permanently-mounted system.  So I polar aligned using SharpCap, and since it was still too bright out to start imaging, I decided to give PHD's drift alignment a try. 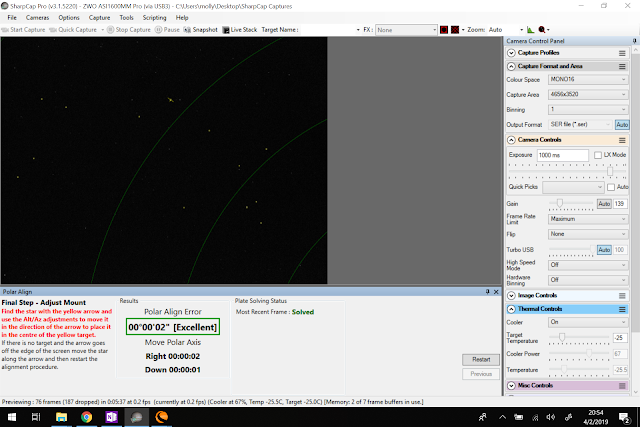 It wasn't very difficult.  First, it has you slew to a spot near the celestial equator and the meridian.  You don't even need to find a nearby star in your mount's star catalog -- PHD conveniently fills in the coordinates for you, and sends a command to the mount to go there.  Easy peasy!  Then you just watch the dec trendline for long enough to have enough points to see the trend (and not the atmosphere), adjust the azimuth a little one way and see where the line goes, and try to get it flat.  It even has a little space to put notes so you can remember which knob makes the trendline move which way.  I was getting close on azimuth when the guide star started getting lost in the noise -- there was a bank of clouds!!  So rude!  So I waited about 10 minutes, and luckily it passed, and I got back to it. 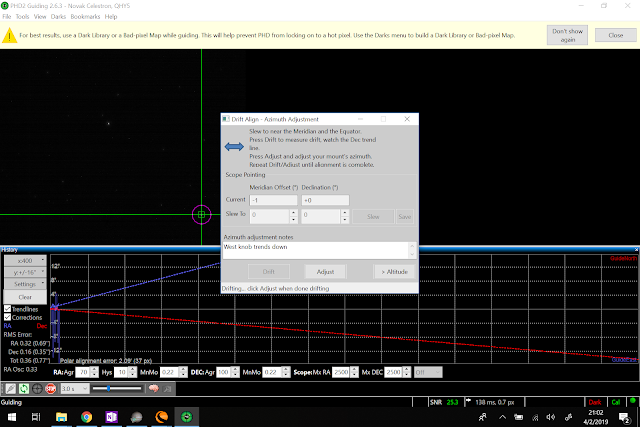 I couldn't get it perfectly flat, but it was close, and the adjustments I was making were tiny.  So I switched then to the altitude adjustment, which has you slew to a spot near the celestial equator and either the eastern or western horizon.  It had coordinates programmed in for the western horizon, but the main observatory building blocks the way, so I flipped it to east (switched the meridian offset degrees from -65 to 65) and then started the drift process.  It immediately shot up!  That was weird, I thought I was very close to polar aligned.  I made a small adjustment on the altitude knob to see which way I needed to go, and it came back down immediately.  Through some trial and error, I figured out that this was a very touchy adjustment, and I only needed to make very small adjustments on the knob, no matter how bad the guide graph looked.  I eventually got the line pretty level.  The whole thing probably took about 10 minutes if you don't count the clouds rolling in. 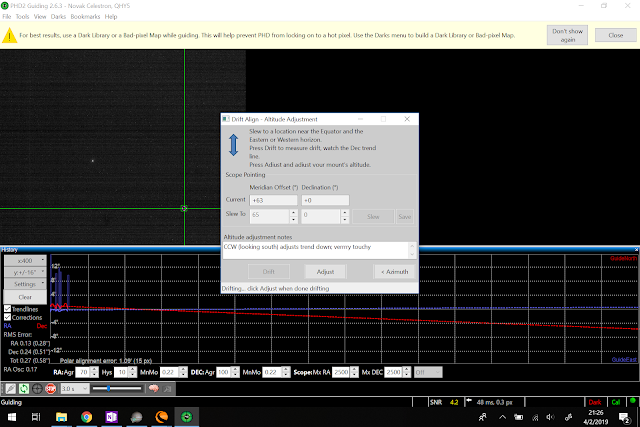 Once that was done, I slewed to Dubhe to see if my alignment model was still any good after the adjustments -- and it was quite close to center! 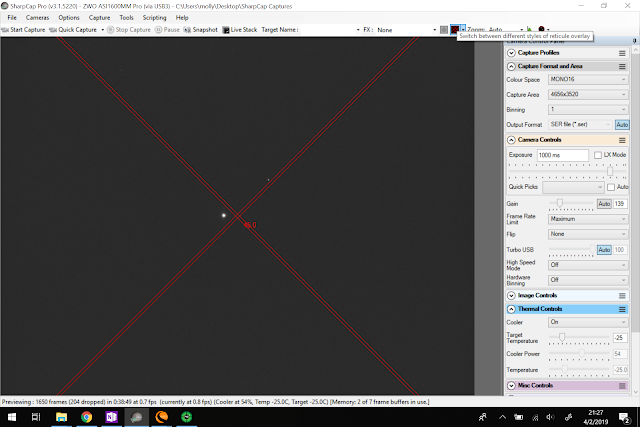 Good enough for me...

Next, I slewed southish to some random star I clicked on in the Celestron PWI app so I could calibrate PHD for autoguiding.  PHD says that calibrations are best done at declinations lower than 20 degrees.  That went swimmingly, and then I slewed to M82, and took a 10s exposure to check its position (faster than doing a plate solve for something as bright as M82).  It was slightly off-center, but close enough for me!

So I flipped over to Sequence Generator Pro from SharpCap and configured the sequence.  Another cloud bank had rolled through, so it was 9:45.  I didn't want to be out later than midnight, so I divvied up the red, green, and blue exposures to fill that time.  I was going to do 5-minute exposures, which would mean I could do 9 subframes per channel, but with the cloudlets floating through, I decided to drop to 3 minutes in case I needed to toss any out.  I had enough time for 15 per channel, but then remembered how abysmally slow SGP is at downloading frames, so I dropped to 14 per channel.  I was about to hit the "go" button when PHD started yelling at me -- the one and only cloud in the sky was right over M82!  Jerk!  So I waited a couple minutes for it to move along, and then hit "go."  The filter wheel rotated to the red filter (a very gleeful moment), I checked the slit position on the dome, and then waited a few minutes for the image to come in.  Guiding looked okay, but not great. 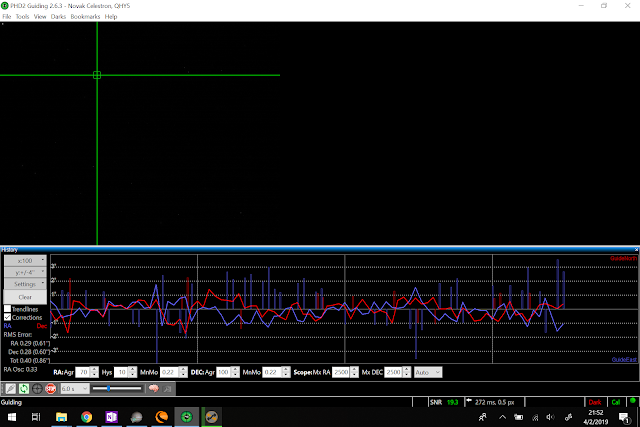 I changed integration times to 6 seconds per frame since the atmosphere was kind of mushy.  But the stars looked fairly close to circular, so I called it good and went inside to hang out.  It wasn't particularly cold outside, although I did have on my Cuddl Dud pants, jeans, under armor shirt, sherpa-fleece-lined sweater, winter coat, and knit hat, but I didn't need my gloves or my fleece-lined hat.

At 11 PM, I went back out to do the meridian flip, and it ended up a little high in the frame, so I decided to use AstroTortilla to plate solve and move the scope.  It was successful in solving the image, but it say on "Re-centering..." for like two minutes, and I didn't hear the scope move.  It was definitely talking to the scope though since it was showing current coordinates in comparison to the image-based coordinates.  So I gave up and slewed it myself.  I was about to continue acquiring frames when I went and checked the last few frames, and it looked out of focus a little bit!  Then I remembered that I forgot to check focus...so I slewed to a nearby brightish star, put the Bahtinov mask on, and checked, and sure enough, it was a little out of focus!  There goes half the night...darn.  So I focused, centered the star and added it to the point model to correct it a bit, and then slewed back to M82, which was still a bit off-center but close enough.  Turned guiding back on, hit Go, and went back inside to warm up.  I didn't have my thermometer running, but it felt like it was dipping into the 30s.  That little exercise wasted about 15 minutes. 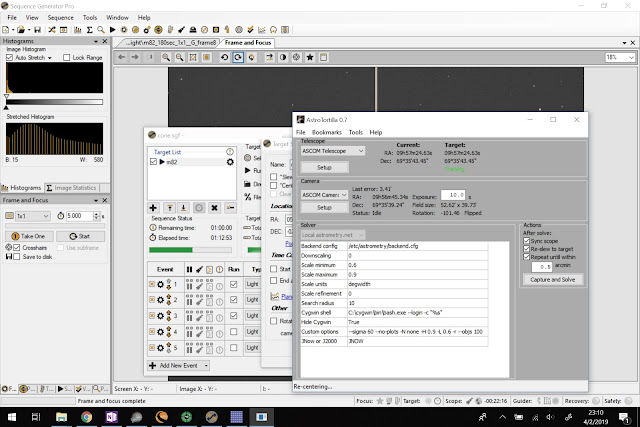 The transparency was not excellent, and this was further evidenced by a low-ish-flying airplane that passed by on my way back into the warm room -- I could see the light path of its headlights for several degrees in front of it!  And my images do look a bit blurred.  But again, color data is quite relaxed in its requirements.  So we shall see!  Glad I'm not doing hydrogen alpha tonight.

I went out at midnight to check on things, and things were still rolling, but the last blue frame I looked at looked kind of terrible.  Fuzzed out and bloated!  And since it was midnight, it was time to pack it in.  I'll process the data anyway and see how things look, since my luminance frames should be good, although I'll only have half the blue frames I had planned thanks to the delay.  We'll see how it goes! 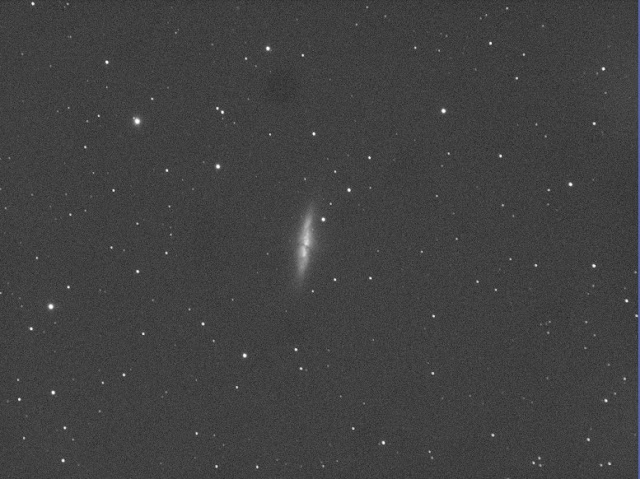 Here's a single 3-minute subframe in the red channel!  It looks ugly now, but soon it will be a beautiful butterfly...

Posted by AstronoMolly at 6:16 PM