The sky was thick with clouds and the breeze was strong, but the forecasts said it would clear between 9 and 10 PM -- and I'm a believer!  So I packed up my gear in the car and drove out to the observatory.  I had a few new toys to try out -- a new electronic filter wheel (Starlight Xpress 5-position 2-inch, USB-controlled), and some cable management! 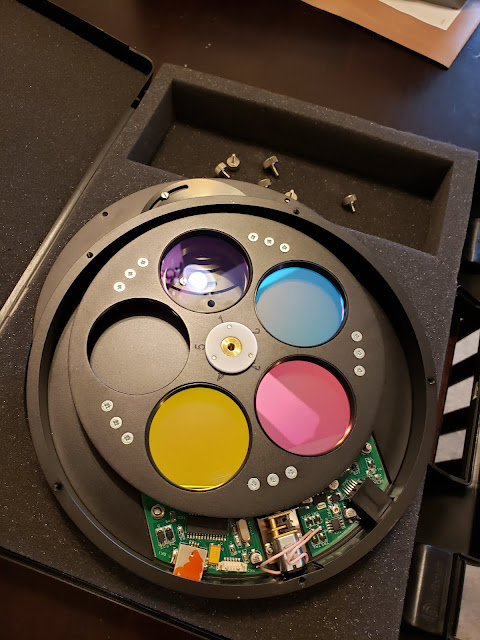 Just after installing the filters.
The blue-looking one is the red filter, the pink one is the green, and the yellow one is the blue.  (They're rejection filters).  Clear one is luminance (blocks UV and IR)

I spent Sunday afternoon taking the advice of the good folks on The Astro Imaging Channel and wrapping my cables in some of the 50 feet of flexible cable sock I bought.  I had previously put off doing this because I change configurations so often -- this camera on that telescope, with or without dew heaters, multiple rigs at once while at star parties, etc -- but cables are cheap, so I just bought a bunch of duplicates.  The cable sock I bought is self-closing, so instead of feeding a cable through, I wrap the sock around the cables, so it's pretty easy to add or remove cables, and it's easy to have them pop out before the end of the sock if I need to run cables farther along.  The cable configuration I built for my astro club's memorial scope includes: a USB 3.0 cable for my ZWO camera, a USB 2.0 cable for my new filter wheel, and the power cable (with a couple of extensions) for my ZWO camera.  My guide camera gets plugged into my ZWO camera (which has two USB ports on it), and since I have my USB hub attached to the pier, I just have the Celestron mount connection USB cable separate from the bundle.  My USB 3.0 hub is velcro'd to the pier, and then a USB 3.0 cable runs to my tablet.  Now I only have one thing hanging off the scope!  I suppose I could also plug the filter wheel into the camera, since it only draws 100 mA max (part of the reason I picked that particular filter wheel -- no external power, and very low consumption!). 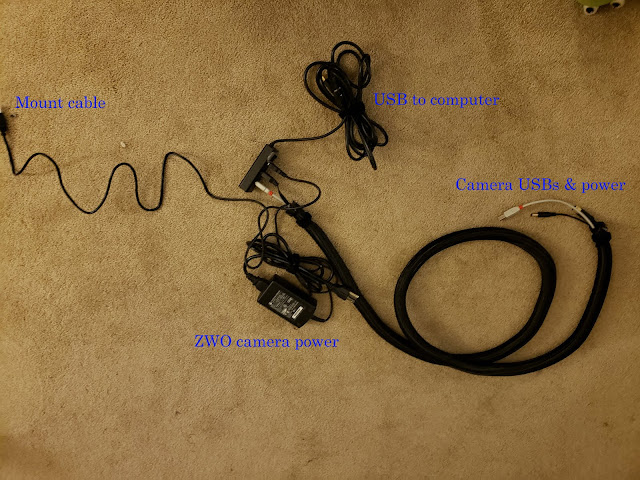 I also made cable configurations for using my DSLR (DSLR USB cable, DSLR power, guide camera, and Celestron serial cable), and then one for either of my Celestron configurations with my ZWO (USB 3.0 cable, Celestron serial cable, filter wheel USB 2.0 cable, and two dew heater straps), and then one specifically for the Texas Star Party, where I'll be using a SBIG ST-8300M I'm borrowing with my manual filter wheel on my 11-inch Schmidt-Cassegrain (USB 2.0 cable for SBIG, SBIG power cable, guide camera cable, my other two dew heaters, and the Celestron serial cable).  Yeah cable management!  No more snagging on stuff by accident, and fewer things to move around and mess up guiding.

So I got out to the observatory around 8:20 PM, and the clouds were still thick, but I went ahead and set up.  First I set up a timelapse, since watching the clouds dissipate is pretty cool.  (Sorry I haven't posted last week's timelapse video yet -- I'm having some file naming issues, I think I'm just going to write my own script to do it!).  Then I opened up the dome, plugged in my cameras, and connected everything to my cable bundle.  It's beautiful! 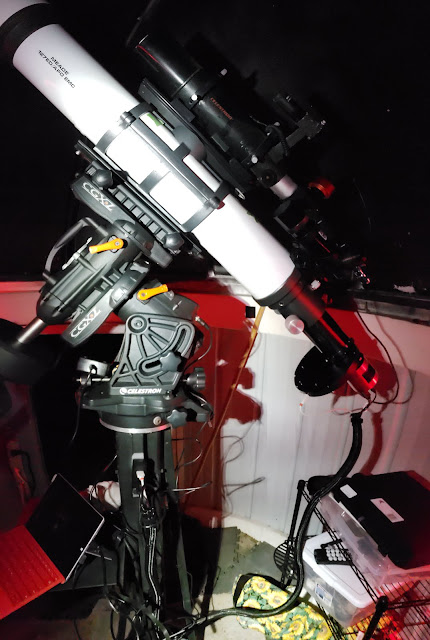 Still got a bit of a power cable mess, but that part doesn't move, so I'm less concerned...

Buuuuuut the clouds were thick.  So I decided to take some flats. I slewed the scope down to a level I could reach, attached a white t-shirt using a stretchy headband to the objective, set my Celestron PowerTank on the slit window ledge thing, and turned on the large white light.  I then remembered that I probably wasn't quite in focus with the new filter wheel, but I figured I'd take them anyway.  Once that was done, it was still super cloudy, but there were a couple of tiny suckerholes through which I could see Castor and Pollux.  So I slewed up there, threw on the Bahtinov mask, and focused as best I could with a fuzzy diffraction pattern image (see more about that here). 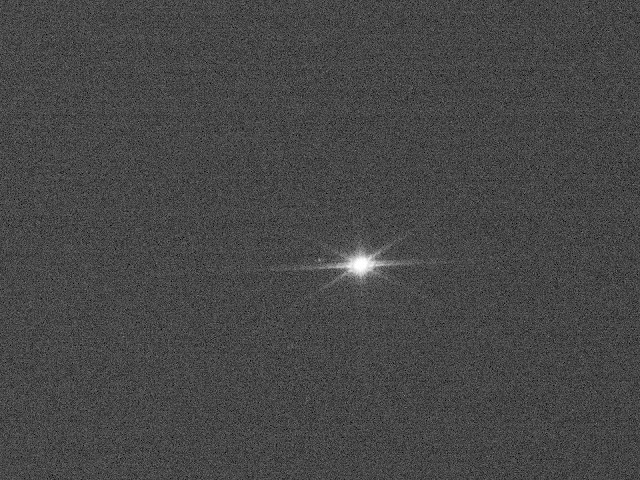 While slewing, it sounded like the motors were having a bit of a hard time, so I decided to go ahead and change the balance on the mount, since I'm the main person using it (and anyone using it with just an eyepiece won't miss being balanced as much as I will!).  It was pretty decently out of balance in both RA and dec, so I adjusted that, and then went and sat inside to wait for the clouds to clear.  I decided I'd wait till 11 PM.

The Astro Imaging Channel broadcast started a little before I came back inside, so I hopped on from my cell phone since the cell signal is better than our wifi here.  I haven't gotten that to work in the past, so that was fun!  I stayed on after to chat with the another panelists, from whom I always get great info.

Around 10:30, I poked my head out, and it had cleared out pretty significantly!  And the stars looked steady, plus I could see a lot of them, so the seeing and transparency were probably pretty decent. 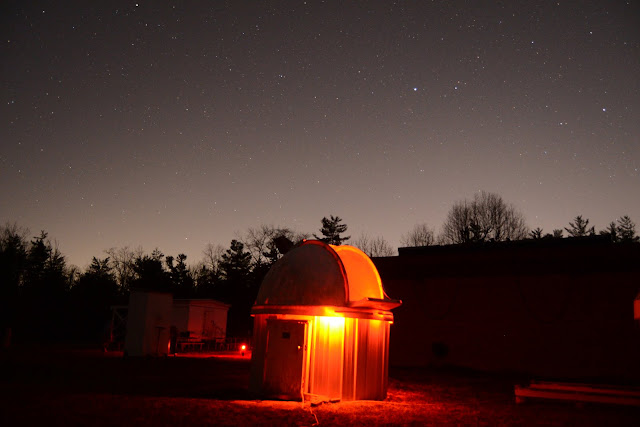 Worry not, I turned off the lights before starting to image.

So I scooted out to the dome to get rolling.  I loaded my previous alignment model that I'd saved to the computer, slewed to Arcturus to check focus, and it was nearly in the crosshairs!  Goto on the Celestron CGX-L we have out in the memorial dome is pretty excellent.  I calibrated guiding there, and then slewed to M82, the Cigar Galaxy, which was my chosen target.  I thought about taking more hydrogen alpha imagery, but I wanted to use my new filter wheel!  I tested a 3-minute luminance frame and the stars looked solid, and then I tested a 5-minute frame and it still looked good!  And the guide plot looked great.  Now, imaging that close to the north celestial pole makes an easy job of guiding because the RA axis is moving very little, but maybe my balancing also helped.  I'll have to see when I image somewhere farther from the pole. 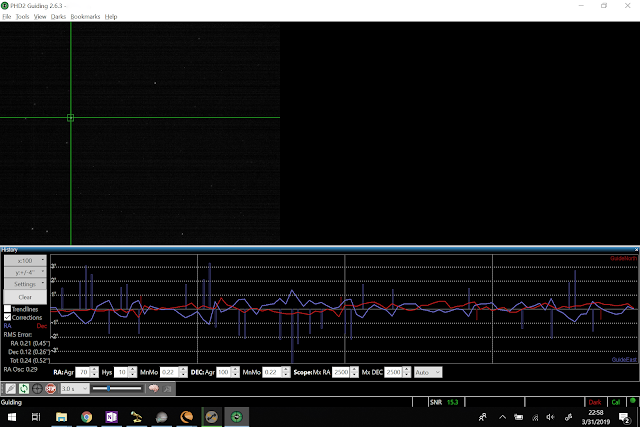 Flipping across the meridian, which is usually a scary process because of all my cables, was quite painless this time around.  M82 ended up a tad high in the frame though, and Sequence Generator Pro is soooooooo slow at downloading even the frame & focus frames that it's hard to get something re-centered.  But I didn't want to swap back over to the faster SharpCap because I didn't want to wait for it to re-cool, and getting AstroTortilla to grab the image when it's connected to SGP is dicey, and I haven't figured out how to plate solve and center in SGP yet, so I just did it myself.

All too soon, midnight rolled around, and I did have to work in the morning, so I packed up and headed home.  I got through 17x300s subframes on the luminance channel (so didn't really use the automation on the filter wheel, boo), so I'll have to collect the RGB and H-alpha next time I'm out.  Here's a single screen-stretched luminance frame: 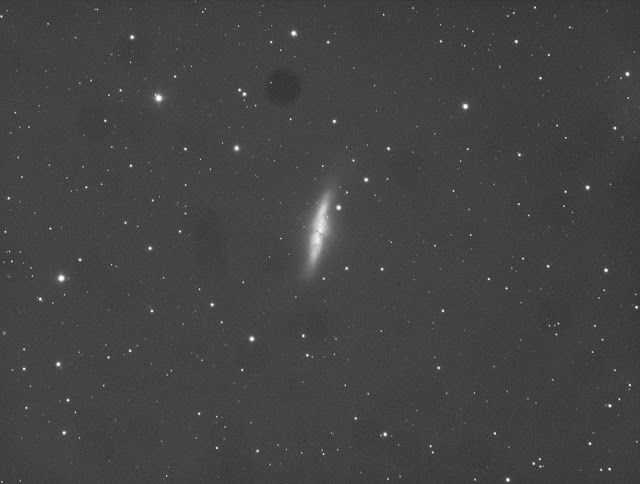 A successful night!  And somewhat representative of the month of March as well -- in like a lion, out like a lamb.


Table of Contents
Posted by AstronoMolly at 7:01 PM