Another fantastic night of imaging!  When I first got out there at 7, there were some thin, high clouds, so I got everything put back together and then waited till they cleared out.  I discovered that Photoshop has a mosaicking tool called Photomerge in the Automate menu, and I saw some evidence online that it will do oddly-oriented and oddly-paneled astroimages, so I decided to try a 6-panel mosaic on M31!  Since I still wanted to image nebulae in the Orion complex too when it came up, and because of the late start, I decided just to do 10x3 minute images for each panel, for a total of three hours.  I wound up having to do a meridian flip halfway through, but thankfully it happened to be just as I finished the top half of the image, so I didn’t have to think too hard to get it lined back up again on the other side.  Also, I’m glad it’s so bright – my test images to align it the way I wanted were only 15s long, just enough to see the core. 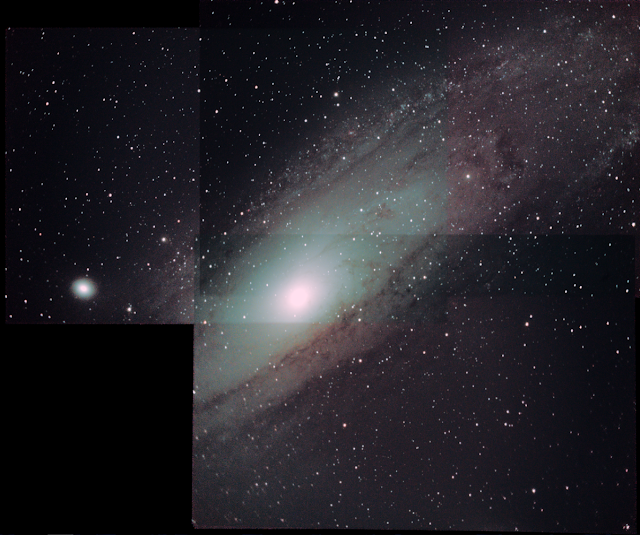 Well, it almost worked...I seem to have a missing panel...
After that was done, I took a stack of 10x5 minute images on the Flame Nebula, up right next to the Horsehead Nebula, which is right next to the easternmost star of Orion’s Belt, Altinak.  I put the nebula up near the top of the frame so that Altinak wouldn’t just totally bloom and cause reflections and lens flare and stuff, so I just cropped out the emptiness as the bottom.  It came out pretty well, if still noisy. 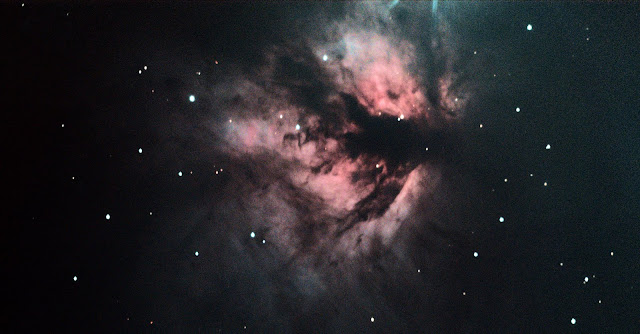 I left about 2:30 AM so that I wouldn’t have two completely sleep-deprived nights in a row!  Also it was cold.  Also club member Will and I were the only ones left, and Will had to leave at 2.  He collected RGB data for his awesome monochrome Andromeda image.


Daylight Savings Time ended that night, and I was worried that stuff might break, but the only thing that semi-broke was BackyardNikon; it was partway into a 300s exposure at 2 AM, and then it jumped back to -3600 seconds and was counting up from there instead.  So I just aborted it and re-started.  I’ll submit a bug report sometime this week.

Table of Contents
Posted by AstronoMolly at 4:55 PM