It was chilly, but boy was it a good night!  Completely clear, excellent seeing, stable atmosphere, no wind, and to top it all off, the telescope behaved very well.  My guided images are still drifting – I need to figure out why – but my stars are only a little bit smeared, so it’s livable.  I finally bought a USB thermometer so that I can record the temperature as I take my images and match lights to darks with more accuracy.  Alignment went super smoothly – its initial guesses for stars were very good, and even polar alignment was close.  I’ve been using Fomalhaut now that Altair is too high and Antares has set, or is at least behind the trees or something.  It’s just above the trees, but the C11 can see through trees pretty well.  Alignment took only 20 minutes; I arrived at 7 PM, and was imaging by 8:30.  It was awesome!


I started with the Fireworks Galaxy, which was high in the north, but I lost a little less than half my exposures to dew.  I had to really crank up the dew heater, since we nearly hit the dew point.  I had to use the blow dryer three times as well.  Even the guide scope dewed up, so I had to crank up that dew heater as well.  I couldn’t see it with a 60s exposure, but I could make it out with 5m, so we’ll see how it comes out in stacking. 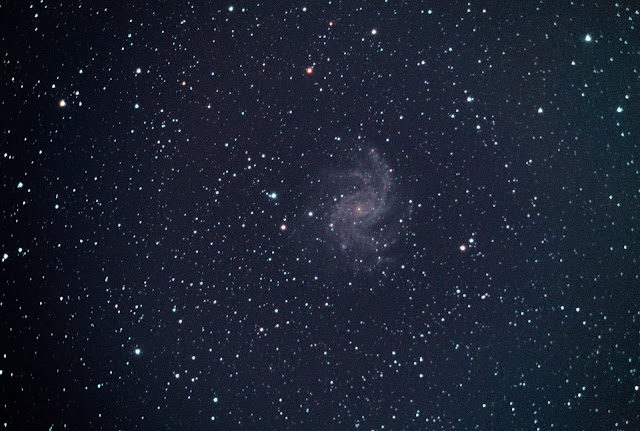 NGC 4946 Fireworks Galaxy, Nikon D5300 on my C11, f/6.3 focal reducer, Orion Skyglow filter
Guiding: QHY5 on my Orion ST-80
16x300s, ISO-3200
Well, you can see it, which is cool…the background came out pretty noisy, though.
Next, I did the Crab Nebula, since I think the last time I did it I only did 3m exposures because of light pollution.  It was high in the east.  The eastern sky at the observatory is the best, especially around 3 AM, when it is quite dark. 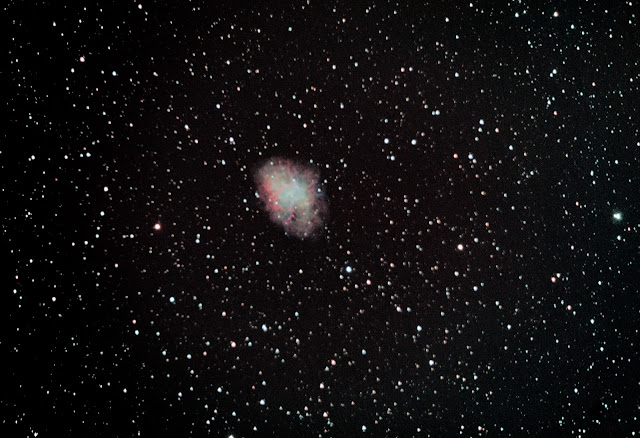 M1 Crab Nebula, Nikon D5300 on my C11, f/6.3 focal reducer, Orion Skyglow filter
Guiding; QHY5 on my Orion ST-80
19x300s, ISO-3200
See on AstroBin
It came out more or less like the first one – next, I’ll have to try not using the focal reducer so I can get more resolution on it.
Next, I finally did the Horsehead Nebula!  I could just make out its shape and some of the red color at 5m.  Hopefully it comes out well in stacking.  I lost a few of those to dew as well. 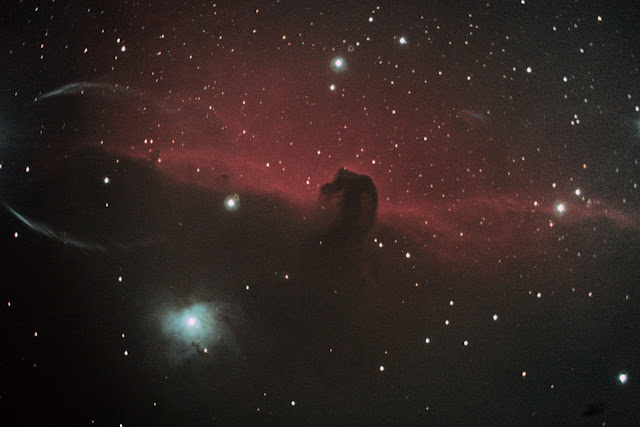 It came out a little noisy, and apparently Alnitak (easternmost star in Orion’s Belt) is a really bright star – you can see the reflections from it being just off the frame on the left.
Finally, I switched the camera over to the guidescope, and tried to fit the Flame, Horesehead, and Orion Nebulae into a single frame.  It was not to be.  I think I can get it if the Flame is at the very top of the frame and Orion is at the very bottom, but they might be cut off a bit, and I try not to have stuff too close to the edges because of coma and vignetting.  I think I’ll try a four-panel mosaic here instead.  So instead of doing the trio, I just did a wide field on Orion, which looks fantastic.  I did 1m exposures, about the limit of the guide scope unguided. 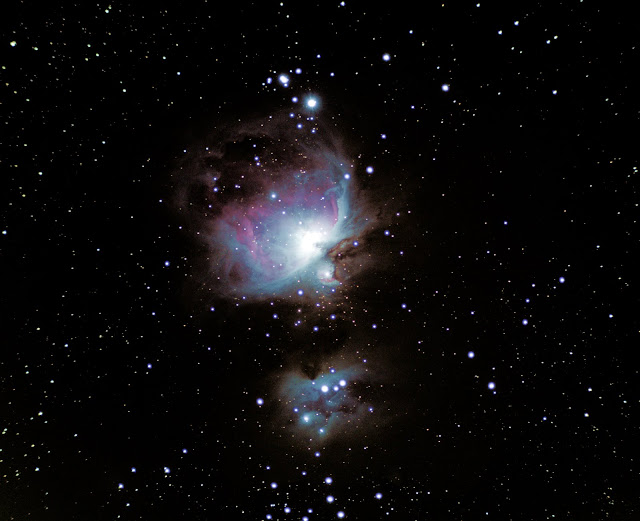 Holy sweet goodness that came out awesome!!
I am curious to try guiding the guidescope using the main telescope…I can get like sub-pixel accuracy because the focal length of the C11 is soooo much longer than the guidescope, so little tiny movements in the guidescope will appear large and easily correctable in the C11.  I didn’t try it last night because it was already nearly 3 AM.  Perhaps later in the winter when it’s up earlier in the evening.  Right now, Orion’s not really up until about 12:30 AM.
Overall, a fantastic night!  It felt pretty cold due to the high humidity, but it was windless, which made a huge difference.  It was in the upper 30s.  Frost formed on top of my camera bag and other accessories.  It’s going to be clear Saturday night too, so I left the equipment set up.  The transparency is supposed to be not quite as good, but it looks like it’ll be another windless evening, and lower humidity, since the temperatures should be in the lower 40s instead.

Table of Contents
Posted by AstronoMolly at 4:46 PM