I set up my C11 plenty early, and then started alignment once it got dark to see a few stars.  I looked at the moon and Jupiter before it got dark, since Jupiter sets pretty early these days.  However, it started doing the thing again, where the shielded cable is shorted and the servos start overdriving.  So I taped the cables to the mount so that they definitely wouldn’t move.  It worked for the rest of the night.  *sigh* like WTF Celestron, who in the hell uses the shielding of a cable as another pin.  And allowing a short to overdrive the servos!  At least ground it out, for goodness sake.
Once I got the cables taped down to the mount, alignment went smoothly, and getting the guidescope and camera set up went smoothly as well.  I was able to focus the guide camera, and then I changed the calibration step size back to a normal value, and calibration went smoothly.  Then I started imaging!  M16, the Eagle Nebula, was my first target.  I took a 90-second image.  It almost worked…but the stars were elongated.  Will showed me how to pull up the guide graph, and sure enough, the RA axis looked like crap.  He says he hasn’t been able to get his working right either, and that one solution is to make sure the balance is slightly toward the east in RA to counteract backlash.  I moved the counterweights up a bit to accomplish this, but it didn’t seem to help.  I can’t check how the balance is though because I don’t want to loosen the clutches and lose my alignment.  So that’s something I’ll have to do next time, I guess.  A more perfect polar alignment also helps.  I also saw online to make sure you have the backlash compensation turned off.  I don’t think I’ve had it turned on on this mount, but I’m not sure.


Since my guided images weren’t looking very good because of the elongation, I decided just to do what I normally do – 30-second images.  I still got some awesome results last night.  Tracking wasn’t stellar – I lost quite a few due to drift – but things turned out anyway.  First was the Eagle Nebula, M16.  You can see the Pillars of Creation!! 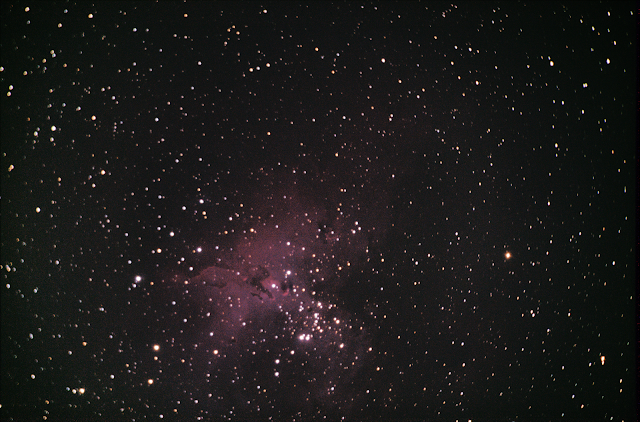 Next, I tried the Helix Nebula, but I couldn’t see anything.  I didn’t try for long and instead moved on to the Swan Nebula, M17, while I was in the vicinity.  I’m not getting much more detail than the images I got last year on the C8, surprisingly.  I brightened it up a bit in Photoshop just to see, and I think I like the effect, actually. 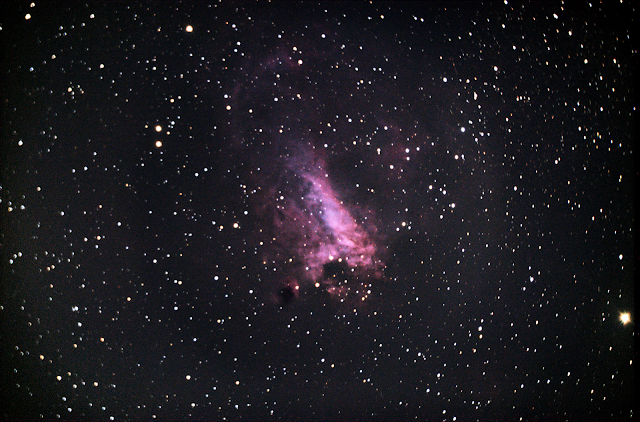 M17 Omega/Swan Nebula, Nikon D3100 on my C11, f/6.3 focal reducer
20x30s, ISO-3200
It is a lot less grainy, however.  And still only with 20 usable images.  This one is smaller angularly because we’re seeing it edge-on, or so I read on Wikipedia.  Interesting.
Next I tried the Crescent Nebula.  I’ve tried it before without success, but this time I could just make out something in the image on my tablet.  I stacked them, and sure enough, there it was!  Well, the edge of it, at least.  I’ll have to get guiding going first I think before I can get more detail on the rest of it. 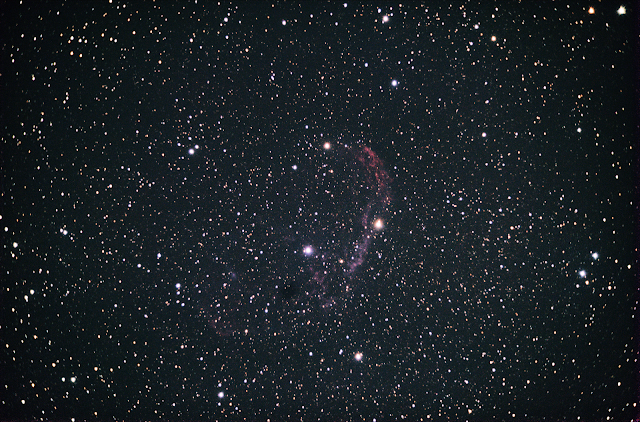 Crescent Nebula, Nikon D3100 on my C11, f/6.3 focal reducer
29x30s, ISO-3200
I need more data on this one too.
Then I decided I wanted to take a shot at imaging through the guide scope.  So I attached the DSLR to it, got it focused, and imaged the Andromeda Galaxy.  WOW did it come out awesome!!!  Probably now my second favorite image after the Orion Nebula.  Can’t wait to get more data on it – I lost a lot of frames due to clouds. 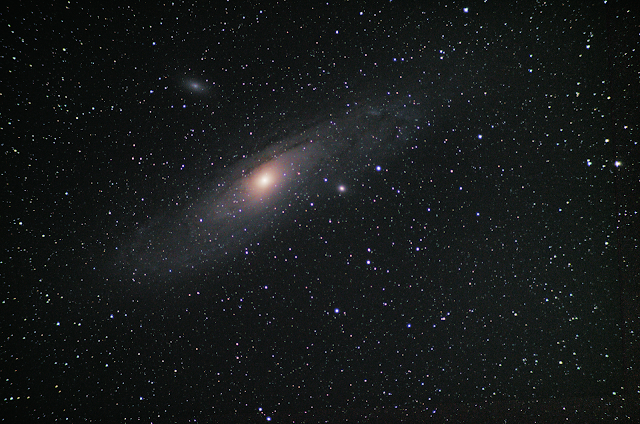 You get M32 as well!  Due to the large FOV, drift from the mount is virtually non-existent.  I could probably do longer exposures and not see any drift.  However, since it’s got a focal ratio of like f/5, it’ll also collect a lot of background light.  Which I can more or less tamp down with stacking and Photoshop.  More experimentation is required.  But yeah, I got this image with only 15 frames!
I also imaged the Pleiades, and you can just make out some nebulosity. 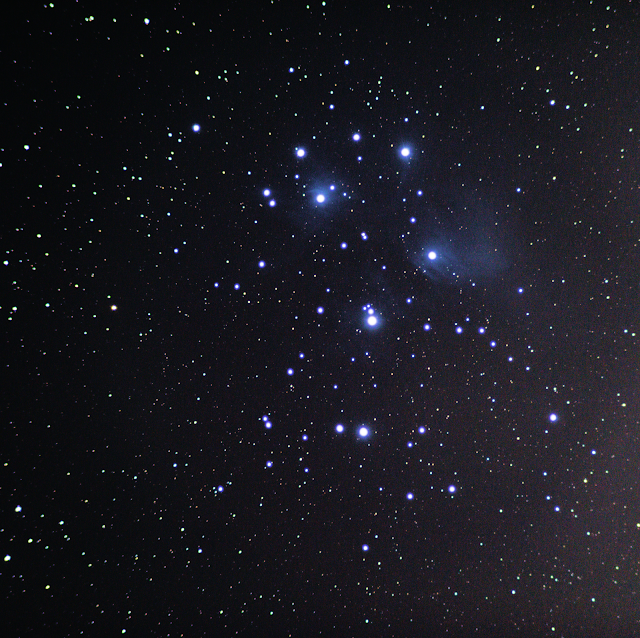 Imaging through the guide scope is a whole new adventure!  Fast focal ratio and large FOV.  It’s going to be AWESOME for the Orion and Horsehead nebulae together come winter.  And I’m using the 8-inch dew heater wrapped twice around it, and it works great.  I’m going to try other large nebulae soon, as well as galaxy clusters.
All in all, a good night!

Posted by AstronoMolly at 6:46 PM