ClearDarkSky promised no clouds, but clouds there were, about 50% until 10:30 PM.  The moon was waxing gibbous and very bright, so none of my Orion photos really turned out.  I also imaged Bode’s Galaxy, M81, for a while, but then when I had to re-slew to it after it crossed the  meridian, I realized that the image wasn’t in focus, so I re-focused it on a nearby star and went back to it.  Goto wasn’t being particularly cooperative (I think I forgot to have the telescope find the switch position before I polar aligned it), so it got me close, but not right on, M81.  So I looked around for a bit, saw some stars that I remembered seeing in the viewfinder that are nearby, and started imaging.  A much different-looking (and brighter) object appeared on the screen.  Come to find out, it was M82, M81’s companion, the Cigar Galaxy.  It appeared brighter, even though it is technically lower in magnitude than Bode’s Galaxy.  So I decided to image that.

However, when I went to process the next day, I realized that it wasn’t focus that was the problem, but collimation.  On the last trip, I realized that the collimation I did previously didn’t hold – I figured the collimation left the secondary a little loose, so it was moving because of gravity depending on where the telescope was pointed.  So Anton and I re-collimated using Sirius, and only tightened the screws, rather than loosening any of them.  We achieved excellent collimation.  But, when I look at the northern sky now, it is no longer collimated.  I’m wondering if it’s still loose.  But I’ll try collimating to that part of the sky, only tightening the screws, on the next trip, and see if that helps.

So, long story short, none of my images came out, and I was up till 2 AM the night before I had to be awake at 5 AM for a poster symposium all for naught.  I did snag a few pictures of the moon, though. 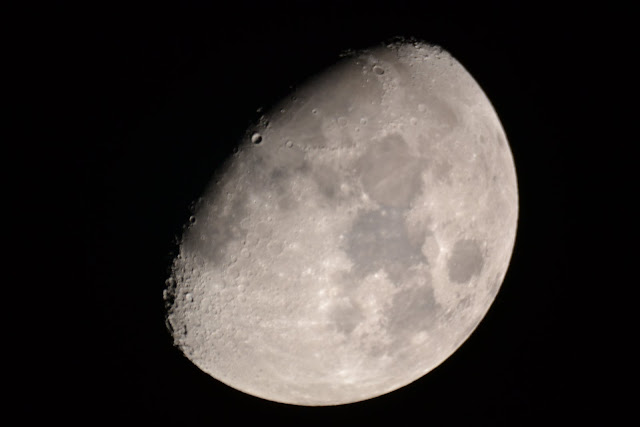 Posted by AstronoMolly at 1:58 PM