[I was given my first telescope - a Celestron NexStar 8SE - the week prior to my first trip out with it.  It is an 8-inch Schmidt-Cassegrain reflector on a computerized, tracking alt-az mount.] 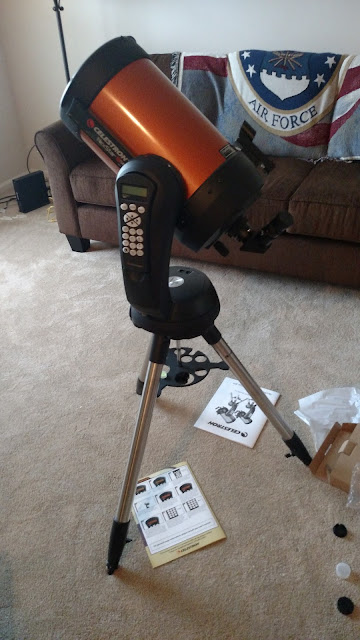 What a telescope to have as my first!

First trip!  After failing to align the telescope after three or four attempts, we finally figured out that I wasn’t entering the correct time zone.   During alignment, I didn’t have it focused yet, but after we got it aligned, we looked at Saturn, and I brought it into focus, and there it was!  It was so amazing to see, this tiny object hanging in space that you’ve seen pictures of so many times, but somehow seeing it with your own eyes makes it completely real.  Also looked at Pluto, which was just a dot.  [In retrospect, we probably couldn't really distinguish which dot of light it was among the starfield, but given a good alignment, it may have indeed been in the viewfinder.]  Everything was soaking wet by the end of the evening, and the corrector plate was covered in dew.

Posted by AstronoMolly at 6:21 PM