The year 2021, despite its many setbacks, was a good year for lunar eclipses -- we were treated to two here in the US!  I was fortunate to be able to image both from my house.

I had just returned to Ohio from a trip out to Berkeley, CA to conduct my PhD research experiment out at the Lawrence Berkeley National Laboratory's 88-inch Cyclotron, having come back early because the cyclotron broke down and we were unable to run the experiment. A sad thing turned into a good thing though -- I had planned on imaging the eclipse from the roof of the cyclotron during my graveyard shift, but California ended up being clouded over! Ohio, on the other hand, was only partly cloudy (although the forecast had called for very few clouds).
I got back to my house from the airport at about 10:15 PM, and after dropping off my suitcases inside and saying hello to my cats, I got busy getting my imaging rig set up. I had brought my Vixen Polarie and carbon-fiber Neewer tripod with me to California, but since I was home, I set up my more-stable Sky-Watcher Star Adventurer on my Celestron AVX tripod instead.  (Same center bolt size!) Atop the Star Adventurer was my trusty Nikon D5300, paired with my Nikon 70-300mm f/4.5-5.6G lens.  The lens is a bit soft and has some chromatic aberration, but it's the longest one I have.  I had wanted to image the eclipse using my Takahashi telescope and ZWO ASI294MC Pro color camera, but unfortunately the Moon would drop below the edge of my roof before totality started. So I set up the Sky-Watcher Star Adventurer in my driveway. 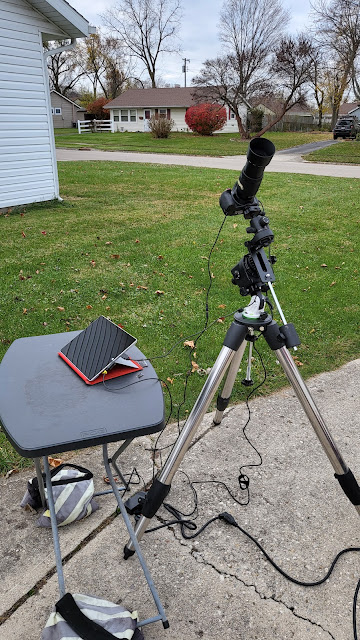 Taken the morning after
To operate the DSLR, I set up my old Microsoft Surface 3 on a folding table and connected the camera via USB to BackyardNikon, an indispensable app for DSLR astrophotography. It was below freezing outside, so I worked quickly to get everything plugged in, and I built the rig inside the house and then brought it outside. After getting the camera pointed at the Moon and setting the Star Adventurer to the lunar tracking rate, I dashed back inside to operate the tablet from my toasty warm desktop computer using Google Chrome Remote Desktop.  For the May 2021 lunar eclipse, I timed my exposures with the different phases of the eclipse, but I was running out of time to do all the math, so I decided to just brute-force it instead, especially since this was a very long-duration eclipse; I just made a list of several exposure times running from 1/4000s (for the pre-eclipse phase) to 30s (which I probably wouldn't need since this eclipse wasn't total, but just in case).  Then I ran it in Loop mode all night.  From Dayton, the eclipse ran from 1 AM until after sunrise, with maximum eclipse occurring at about 4 AM.
I finally got to bed at around 1 AM (I had also set up my Takahashi to run a similar loop to get what I could before the Moon set behind the roof).  I woke up by accident at 4 AM, but took the opportunity to dash outside and re-point the camera to be good for the rest of the night.  Polar alignment on my Star Adventurer is never that great; I think I've offset the polar scope alignment image by accident. But it hadn't drifted out of the frame at least, so that was good.  It also gave me a chance to take a look at the eclipsed Moon, which was obviously not in 100% totality like the two other lunar eclipses I've seen, but still pretty cool! Even if it was behind some thin clouds.

Despite the clouds, I got quite a few clear shots!  I downloaded about 15 GB of data in the morning from the tablet and sorted through the images, deleting the over-exposed ones and the clouded-out ones. In the end, I made a few composites I'm quite happy with, as well as a few single exposures that came out really cool. 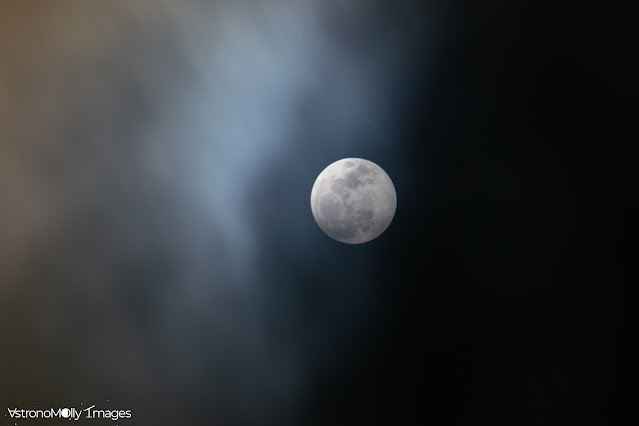 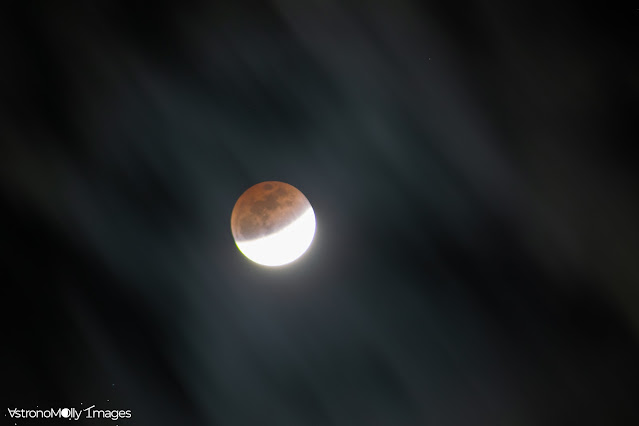 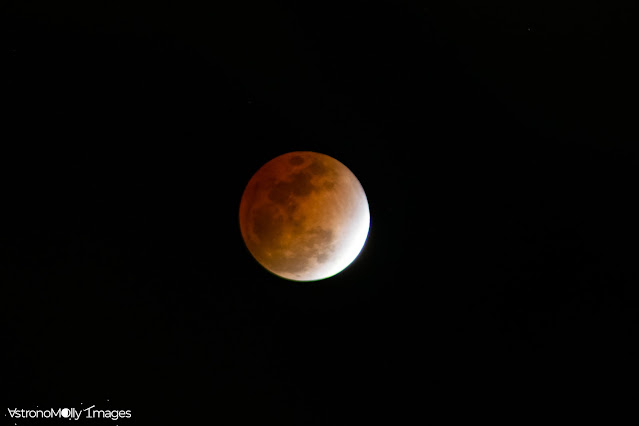 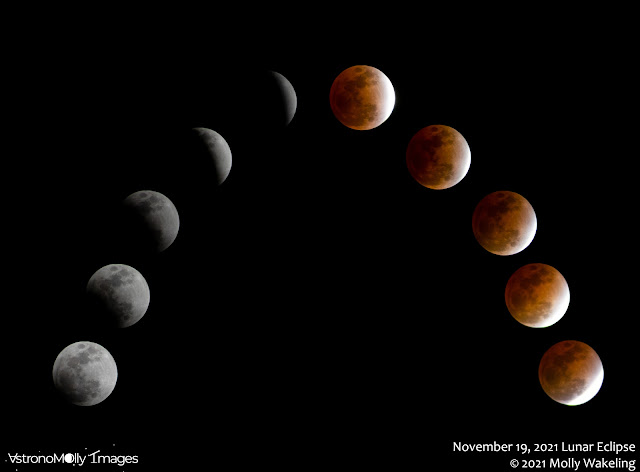 Trying to be creative! 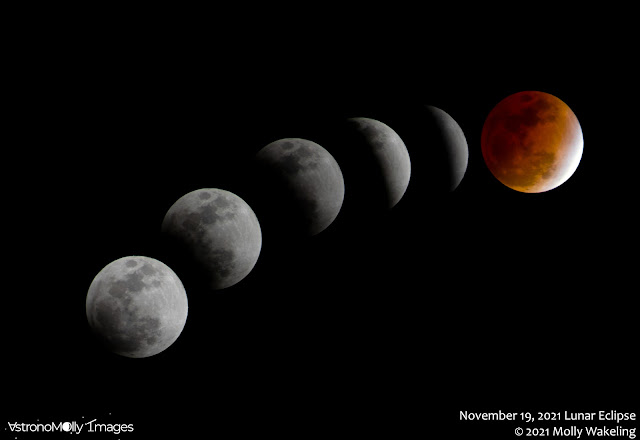 Since the Moon set not long after totality (and had to go through some trees and my neighbor's house first), I didn't get any good post-totality partial phase photos, but there are lots of ways to make cool composites even without them.  I'm so glad I was able to set up so quickly and get good results!  I've really got the process honed now.
Previous post: #574 & #575 - October 8 & 9, 2021 - Hidden Hollow Star Party

Posted by AstronoMolly at 6:38 PM