After finally getting all of my gear working, I had several nights that were mostly clear, but had lots of passing thin, high clouds that kept wrecking things and causing my sequence to abort midway through the night.  So data has been coming in very slowly.  However, the last couple of nights have been crystal-clear!

Also, side-note: Google has finally updated the user interface for Blogger!  Thank goodness.  It really looked like it was still stuck in 2002.  They took away the option to re-size images, so sorry they're kind of small.

When using a long-focal-length telescope, it can be hard to tell when there are clouds or tree branches in your frames.  Many people use their guide camera to see this, but since I'm using an off-axis guider, it's pretty much impossible to see those things.  So two weeks ago, I finally implemented a plan I've had for a little while.

I scrounged through my box of extra gear I haven't put to good use yet -- lots of old cameras, lenses, and other stuff people have given me.  (I will find a use for them all!).  One of my friends from when I was living in the Midwest, Will, gave me a color Meade DSI when I bought his Orion ST-80 off him to use as a guide scope on my old setup.  It's not a very good camera by today's standards, but I don't need a good camera for this.  I also grabbed my shortest focal length CCTV lens that my friend John gave me, a little 25mm guy.  A while back, I bought a T-thread to C-mount converter so I could attach these kinds of lenses to my astro cameras, so I grabbed it too from my tool box, and assembled everything together.  After installing the Meade Autostar Envisage software to run the thing (Meade cameras don't do ASCOM :( ) and seeing what kind of spacing I needed to bring distant things into focus, I figured out that I didn't need any spacers at all -- the CCTV lens was designed to sit right in front of the sensor, I guess.  Woot!

The next task was to figure out how to rig it up on my telescope.  Currently, I have my Celestron 8-inch Schmidt-Cassegrain on my new Paramount MyT mount.  I have a short Vixen-sized dovetail bolted to the telescope tube still from back when I was running my DSLR piggyback on it a while ago, so I grabbed one of the Vixen-sized clamps I have.  Unfortunately, neither the camera nor the lens has a tripod attachment or any other useful way of attaching it to something tripod-esque.  So I did what any good engineer does -- I used some Velcro to strap it to the clamp!  It sags a big under gravity, but I don't need it to be perfectly co-boresighted with the telescope, just pointing in the same general direction.  It won't fall off the way I've got it rigged up, and that's the main thing I care about. 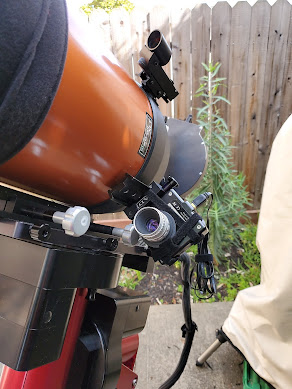 I figured out on the second night using it that I could use the Meade software to take a timelapse, so I set it to save an image every 30s throughout the course of the night.  This would let me go through and see why the sequence aborted, and also throw out frames where thin clouds were rolling through (this can be hard to tell in the subframes).

It's really been paying off -- now I can see if I got too close to a tree, or if the reason I can't get a guide star is because of clouds or something else.

When more parts of your system are working, smaller issues tend to present themselves where they were buried under other issues before.  Some of my targets have had no issues, such as galaxy M88 at the beginning of the night and the Ring Nebula (M57) at the end of the night, but the Whirlpool Galaxy (M51) and some of the Hercules Cluster (globular cluster M13) have been having some strange issues.  In many of the frames, the stars appear to form a diamond pattern. 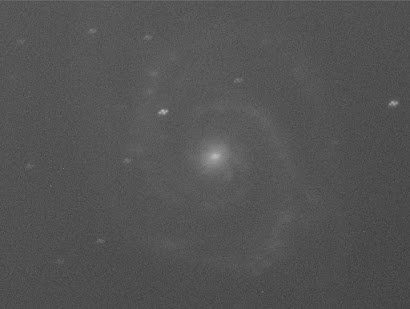 At first, I thought this was a result of diffraction around a tree branch.  But since I have added the context camera, I could go to the timestamp of when those weird subframes were taken and check and see what was going on.  No tree branches in sight.  So I wondered what the guide graphs looked like, and wished there was a way to see the whole night's guide graph.

I was poking around through the PHD2 software settings and decided to see what all the log file had in it that might be useful.  Well, as it turns out, every data point from the whole night is contained in it!  Every correction, guide star SNR, RMS error, etc.  So I decided I'd write up some code to plot the points so I could look at the whole night.

Well, before I was about to start writing the code, I did a Google search to see if anyone else had already done it.  I should have known -- of course other people have done it.  There's a nicely-packaged executable that shows you everything from the file -- it can be found here.  It will show you the calibration run as well, the data plotted in frequency-space so you can look at drive harmonics, the guide graph shows when the guide star was lost, the star's SNR, and a bunch of other useful statistics.  It's available for Windows, Mac, and Linux.  Thanks Andy Galasso!

So I went to the portion of the night where I was imaging M51.  And the source of the diamond pattern was very obvious!

So clearly there is something weird going on with my mount in that part of the sky.
My other two targets for the night -- M13 and M57 -- had some troubles too though.

Hmm.  Most strange.  Two thoughts:
1) My calibration isn't great -- it's not terrible, but it's not orthogonal either.  I've had this issue a lot with the off-axis guider.  I had a good calibration earlier this month, but after M88 wound up having to sit in a not-ideal place in the image in order to get a guide star in the guider's field-of-view, I rotated the off-axis guider and had to re-calibrate.  I'll try re-calibrating again tonight to see if it helps. 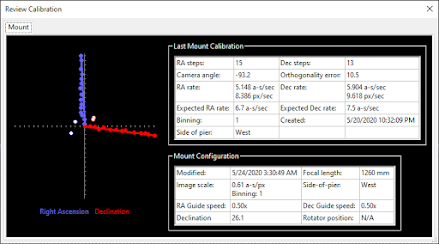 2) Since it's springtime, there's a lot of pollen, spiders, and spiderwebs on various parts out of the mount.  Might need to do some cleaning.  I cover it with a Telegizmos 365 cover during the day, but plenty of stuff gets on it during the night.  The gear boxes seemed sealed pretty tight, but I'll run through with a duster and air-duster and see what I can do.

Despite these issues, I'm so happy to be finally honing in on perfection.  Or, at least, as good as I can do with all of this light pollution and air pollution!  When I have good data to work with, then I can focus more on my image processing.

There is nothing quite like waking up in the morning, going out and powering down the telescope, and seeing that the sequence completed successfully!! 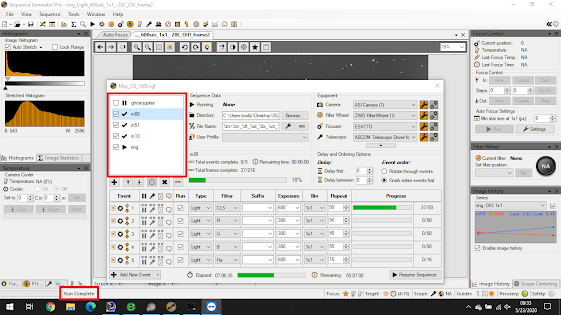 Lots and lots of hard work are, at last, paying off. :D

Posted by AstronoMolly at 12:12 PM