This trip got off to a slow start - traffic was backed up pretty badly on my route home, due to a major polling place along the way that had a lot of traffic.  After turning around to take a different route, I still encountered a good bit of traffic, and what is normally a 10-minute trip took nearly 45 minutes!  The sun had already set, so I quickly changed from my work clothes into my under armor and warm clothes and threw my ZWO and guide camera bag, DSLR camera bag, tripod, folding table, folding chair, tool & accessory tackle box, and bag of additional warm clothes into the trunk of my car.  I still needed dinner and didn't want McDonalds, so I tried to hurry as I went to the fastest alternative, Jimmy John's.  I still hit some traffic on my way out of town, but once I got on the country roads headed to the state park, it was smooth sailing.

On my way into the park, a county sheriff's SUV was lurking without its lights on on the road in; I encountered them several times back in the day before I had an observatory key.  They'd kill my night vision with their headlights, and explaining what the heck I was doing with all of that gear was always interesting, but they were nice enough and were helping to keep the drug users out of the park.  Unfortunately they always showed up before I'd finished aligning, otherwise I would've offered some views of the heavens!  I told one officer that if he came back around in about 45 minutes I'd show him Saturn, but he had to continue on his route.   I had a feeling this one was going to follow me, and he did, lights off, at a distance.  After I unlocked the gate to the observatory, he left, since they know we're out there fairly often.  Glad they're around to keep the park safe!

I finally arrived at 7 PM, quickly unloaded the trunk, opened up the observatory and the warm room, and got the heat cranked up.  Since the club's new Celestron CGX-L mount that we've just installed in the memorial dome hasn't yet been polar aligned, I pulled out the club's Celestron CGEM, which is all attached to the tripod and ready to go.  I can pick it up and haul it outside without much trouble.  I grabbed the telescope that goes on it, a Meade 127mm apo, and got it mounted, got the cameras attached, and then balanced.  It was hard to balance in declination because the dovetail plate didn't want to slide.  Luckily, the camera and filter wheel weigh about the same as the 2-inch mirror diagonal and eyepiece, and the guide scope and camera weigh about the same as the finderscope, so balance in right ascension was already good. 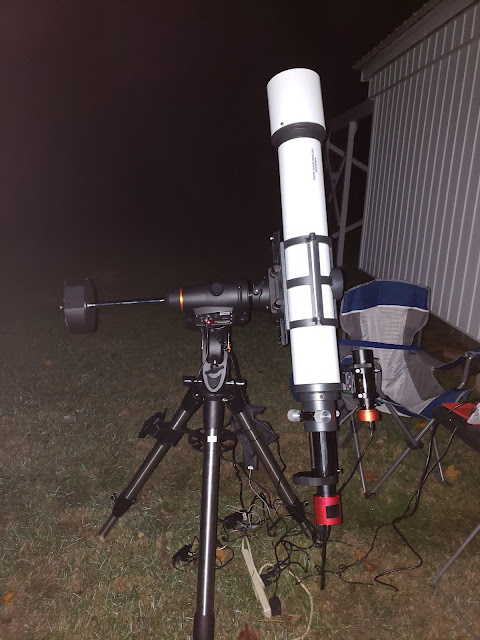 I had everything built and polar aligned by 7:45 PM - SharpCap's polar alignment routine made polar alignment very quick.  I was off by about 3 degrees in azimuth and 3 degrees in altitude to start.  Alignment took a little bit longer because its first guess on Vega wasn't good, so I had to put the finderscope back on and hunt around for it.  But I finally found it, and the rest of the gotos at least got the star in the camera's field.

I still needed to choose a target, but needed to decide fast, since I didn't want to be out too late, since it was a weeknight.  I had just spent some time looking at targets for some time I've been given on a super-awesome remote telescope down in New Mexico (more on that in a future post), and the field-of-view on the Meade scope is similar to the one on the Planewave scope on the remote telescope, so I already had a few ideas.  I quickly settled on M74 because it was going to be on one side of the meridian until about the time I wanted to quit, so then I wouldn't have to do a meridian flip.  M74 is a face-on "grand design" spiral galaxy in the constellation Pisces, and was nice and high in the sky.  Looking higher means you are looking through less atmosphere, so the image quality tends to be better.

I did a Precise Goto to the target, but forgot to do final focus on the Precise Goto star, so I slewed back to it and grabbed the Bahtinov mask out of the memorial dome.  I got distracted by a text message, so I centered it and slewed back to M74, forgetting to focus!  So I did another Precise Goto and put the mask on.  The stars were looking a little bloated, but the mask showed they were in focus (see more on that here), although the mask had sort of a weird double-image to it (although, now that I think about it, it might have just been a double star).  With it focused and back on target, I turned guiding on and started with a 3-minute subframe.  Guiding looked terrible, which I kind of expected because the seeing wasn't great (stars were twinkling) and the RA axis was showing a little backlash when I saw aligning (the star would keep moving for a bit after I let go of the button).  Despite how crazy the guide plot looked, though, my stars looked round. 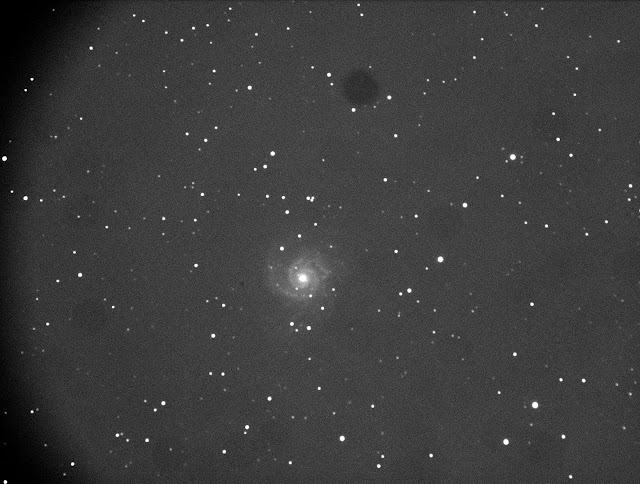 Looks like I need to clean the objective next time I'm out there.  Lots of dust bunnies!

The stars still look out of focus...but sometimes the raw file can be deceiving, and the Bahtinov mask spikes were perfect, so I pressed onward.  I tried a 5-minute sub, but I could see some stretching in the stars from guiding error, so I decided to stick with 3.  Because of the poor seeing, I decided to take color frames instead of luminance, since you can have fairly bad color frames as far as focus and detail go as long as your luminance frames are good (see an example of why that is here).

The sky looked nice and dark, at least as dark as it gets in this Bortle 5 zone, above 30 degrees or so.  Capella was twinkling somewhat, even when it was higher, so the seeing probably wasn't that great.  Clear Sky only predicted 2/5 seeing.

In addition to my camera bag, I also brought my DSLR camera bag and my Vixen Polarie star tracker to do some widfield stuff.  I went and warmed up inside while I decided what to image with it, and I settled on the Heart & Soul Nebulae.  They're a bit dim for imaging here (mainly because they're enormous on the sky), but the professional astrophotographer in my club has gotten them before from here, so I figured I'd give it a try.  My 55-200mm Nikon lens is very difficult to focus; the infinity focus location on the focusing ring is extremely tiny!  I miss it often.  It also took some work to get it positioned correctly.  I used SkySafari to help frame the shot.

I could see here that I needed to be just under the star at the bottom of the Cassiopeia W, and the Double Cluster was right next door, which I could see easily in the shorter camera exposures.  Soon I will be getting a red dot finder that attaches to the hot shoe on my camera!  It took some trial and error to get it positioned right.  I had to have the camera rotated at an angle, otherwise it would hit the Polarie later as it rotated across the sky.  Then I had to see how good my polar alignment was - I was able to take 2-minute exposures at 100mm and get almost no streaking.  I could just barely see a reddish area where the nebulae were supposed to be.  Woot!

Around 9:50, I went back outside and rotated the filter wheel on my telescope setup to green.  Besides the bloated stars, the guiding still looked good.  Impressive that a 162mm focal length guide scope was doing pretty decently guiding a 1143mm focal length telescope!  Some clouds had rolled in toward the west, but the part of the sky I was imaging toward the southeast was still clear.

I checked on the Polarie, and the power wasn't on!  I hit the button on my battery and it came back on, and then I had to re-target the camera.  I got close, and then let it run.  When I came back out to check on the telescope exposures, it had turned off again, only about 10 minutes later!  It doesn't do that with my other battery.  My newer battery must be looking for some active use signal that the Polarie isn't providing or something.  Also, I need to replace the internal batteries in the Polarie so that I don't have to worry about that.

Since it was a weeknight, I didn't want to stay out too late, so I started packing up at 10:50 PM, just as the clouds started covering the area where M74 was.

On the Polarie, I lost most of my exposures to the battery power issue.  Oh well, next time... 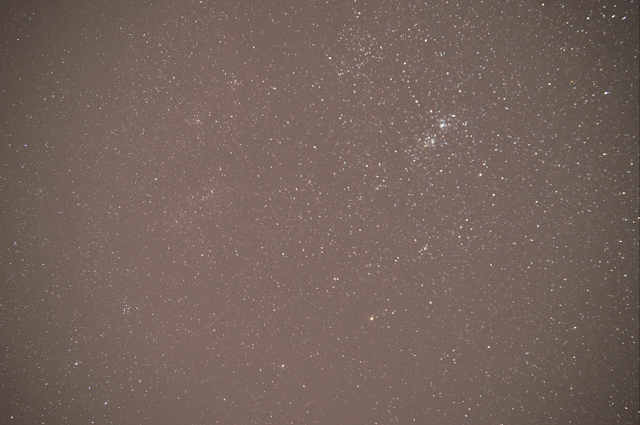 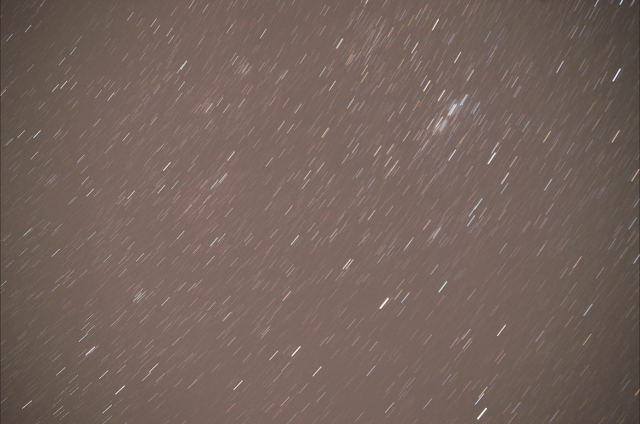 When the power shuts off...

I'll need to go out again soon and get the blue and luminance data.  I'll also look through the scope with an eyepiece to see if the stars look weird visually.

Table of Contents
Posted by AstronoMolly at 2:39 PM