The forecast said mostly clear with some possible high-altitude hazy junk, but I decided to go out anyway because I'm dying for a good deep-sky image.  It's been too long!  Plus, Saturday night was looking promising too, so I planned on leaving everything setup and covering it with my new TeleGizmos 365 cover that I bought after having to use a tarp for my C11 at the Texas Star Party.

But first, I had an outreach event at a local library to show patrons how to use one of the several library telescopes that my county's library system now own.  The program is growing in popularity, and they are nice little scopes!  They're Orion Starblast 4.5's, which are little Newtonians that sit on table-top alt-az mounts.  They're super easy to use, but provide some pretty nice views of the moon, planets, open clusters, some of the wider double stars, and some of the larger and brighter nebulae!  I've started recommending them to people when they ask what their first telescope should be for one of their kids.  Only five people came to the program despite the fantastically clear skies, but an outreach program is worth it for even only one.  This particular library was unwilling to schedule the program after library hours, so it ran 6:30 - 7:30, which meant it was still pretty bright daylight.  I showed everyone inside the parts and pieces of the scope, how it worked, and how to use it, and then I loaded up Stellarium on my laptop connected to a TV and pointed out some of the more prominent constellations and objects to look at from the suburbs.  Then we went outside, and luckily the crescent moon was bright enough to see, so they got to practice aiming the telescope, using the zoom eyepiece, and enjoying a view of the moon. 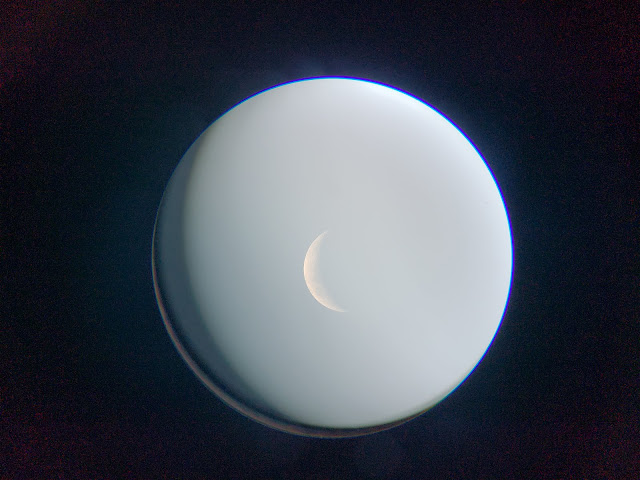 Smartphone photo of the moon through the Orion Starblast 4.5 library telescope, with the 8-24mm zoom eyepiece at 24mm.  Taken on my Samsung Galaxy S9.

After the program, I swung by a nearby Subway to pick up some dinner, but the people in front of me in line were ordering like a dozen sandwiches, and there was only one person working!  It took forever!  Then I missed a turn out to the observatory, which added another couple of minutes.  Then I made a stop myself on the side of a road near a corn field because the crescent moon, Jupiter, and Venus were making an absolutely beautiful trio in the western sky.  I didn't bring my tripod, but I did bring my DSLR, although trying to hold it steady for a half-second exposure was difficult.  None of the images I took really turned out as a result.  Some things you just have to savor the moment of instead. 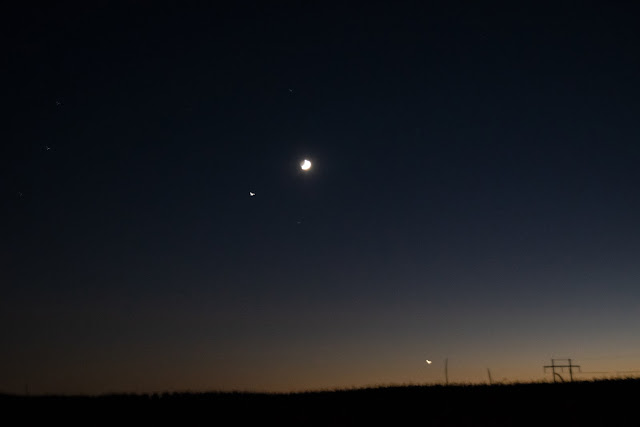 I finally made it out to the observatory at 8:45, started building my rig at 8:55, which took about a half hour.  I was aligned, polar aligned, calibrated, and imaging by 9:55, which isn't bad, although I was hoping this setup would be faster.  I decided to not use the C8, since I'm still figuring out how to make it work on the AVX, and instead use the much lighter and easier Borg 76mm ED apo I have.  (Resistance is indeed futile!)  I have to use a field flattener with it, although it's not working as well as it could because of the extra distance between it and my camera's sensor thanks to the filter wheel.  (And before you ask, no I can't put it between the camera and filter wheel because while one side is indeed M42 threaded, the other side is just a 2-inch eyepiece barrel). 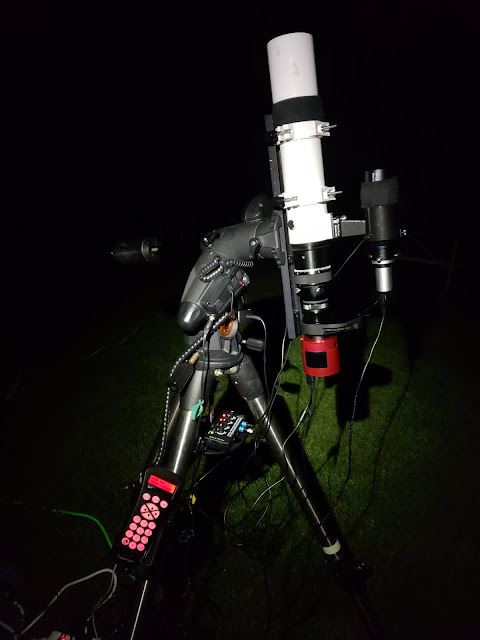 Borg 76mm ED apo mounted on my Celestron Advanced VX mount, with my ZWO ASI1600MM Pro camera attached, and guided by my QHY5L-II on an Orion 50mm mini-guider.

The sky was quite clear, but not as dark and clear as it was Labor Day weekend.  I decided to try the Wizard Nebula with this setup, but it became clear that it wouldn't be worth it from this Bortle 5 light-polluted location.  Even with a 5-minute subframe, I had to crank up the screen stretch on the subframe in order to barely see its core. 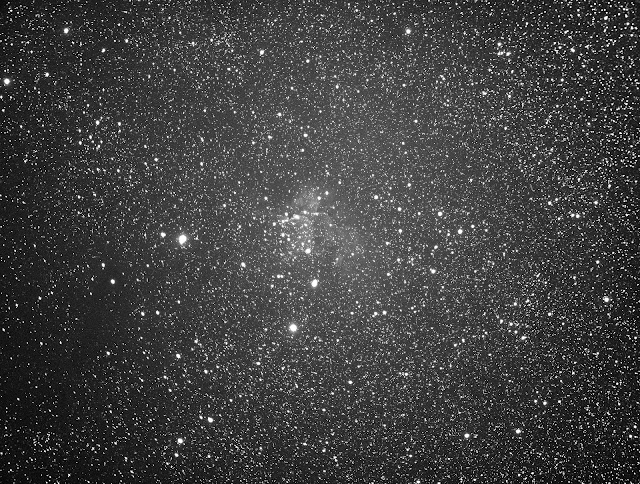 Since that wasn't going to work, I decided to hit up another high-flying summertime nebula: the Eastern Veil Nebula, which is part of a larger supernova remnant.  I've imaged it on the Borg before with my DSLR from Green Bank Star Quest, and it looked awesome.

Unfortunately, the poor tracking in declination again reared its ugly head, even with the lightweight, wide field-of-view Borg and the itty bitty Orion 50mm guidescope.  My stars were getting pulled in the same direction over and over.  Even with only 3-minute subframes, it wasn't good. 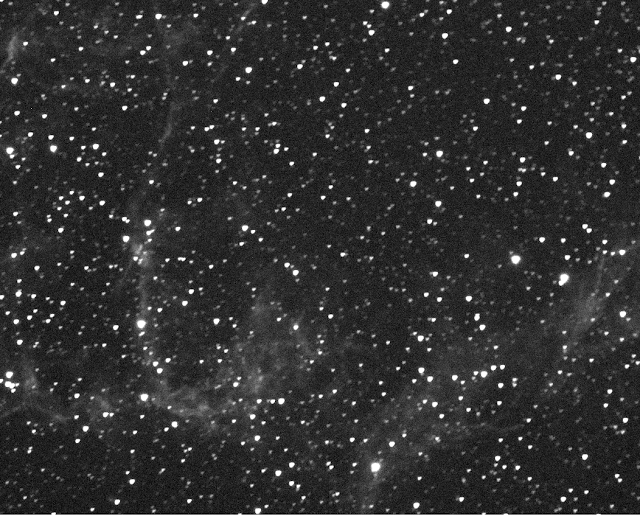 Zoomed-in section near the middle of the frame. 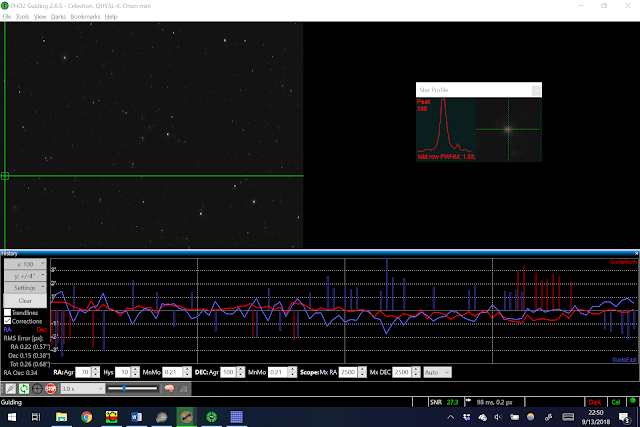 Screencap of PHD2, the autoguiding program

I mean, it doesn't look that bad, but it sure was panning out in the images.  So I tried a recommendation I got on this past Sunday's Astro Imaging Channel session, which was to try turning off guiding in one of the dec directions to prevent the backlash from switching directions from happening.  The stars looked slightly better, but not much. 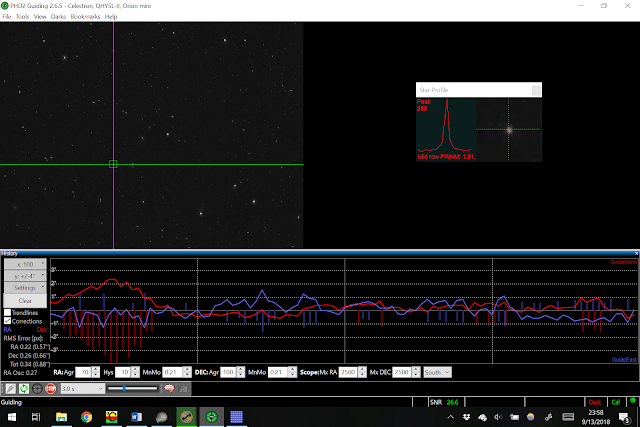 I tried turning off dec guiding altogether as well, but then my stars just looked bloated in all directions instead of just one.  This shouldn't be happening with such a tiny scope!  😡 Maybe I should just take the other suggestion I got, which was to sell all my mounts and get an Astro-Physics 900 GTO or a Paramount!

I went ahead and stacked the 35 luminance frames I gathered before I called it a night (since I had to be at work the next day, I stopped at 12:45 AM), and with careful processing to suppress the background light, it might work. 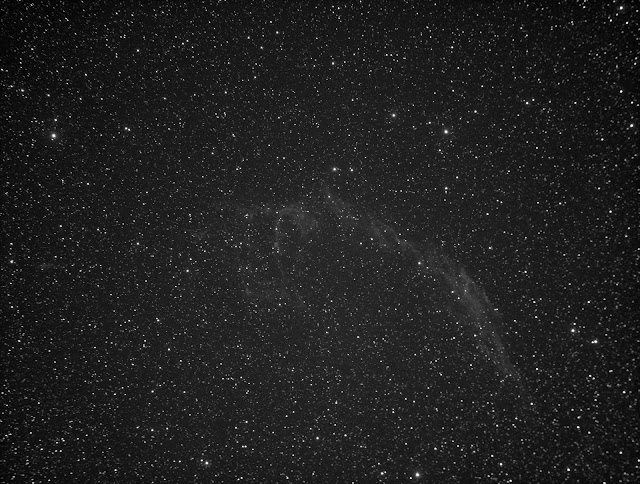 I would've gone for 5-minute subframes if the guiding wasn't already so bad.  Oh well, I'll try again on Saturday night with the RGB channels.

Table of Contents
Posted by AstronoMolly at 3:57 PM