[I will make a separate post detailing what exactly happened to my CGE mount.  I didn't include all of those details in my original log entries.]

It was clear last night, but I didn’t believe the forecasts, so I made other plans!  Luckily, the sky cleared up for a little while tonight too.  The drive over to the observatory was cloudy, and while I was getting set up it was cloudy, but then things finally cleared up after I took some “consolation prize” video of the moon and Venus.

I still can’t get the memorial scope to align properly.  Well, firstly, I wound up having to use the Telrad that Jim recently attached because the finderscope is way not in alignment and I can’t figure out how to align it.  I followed the instructions more carefully this time.  My first attempt, I used Betelgeuse as the sync star, and then something else I can’t remember as another alignment star, and then something in the west I can’t remember, but when I slewed to the moon, it was way off.  Venus too.  Then I had to slew to another star for another alignment, but it was super off.  So I shutdown the mount and restarted, and its initial guesses were good for Betelgeuse and Pollux, but it wouldn’t let me add it.  I checked that I was doing things in the right order.  I tried another star farther away, but still no luck.  So I slewed over to the moon manually and took some video, and then some for Venus.  They were both pretty rock solid in not moving, so I figured it must be well-enough polar aligned that alignment doesn’t particularly matter.  I didn’t have goto, but the moon was too bright for the dim stuff anyway.  After the videos, I manually slewed over to M42 (of course), recognized its dim greenish form and two stars of the trapezium in the viewfinder, and started imaging.  The moon was too bright to do very long exposures, especially at that scope’s focal length – f/5.7 – so I did 60s at ISO-1600.  It’s still too bright, but we’ll see how it turns out.  I took 20, and then I decided to try my luck with the Flame Nebula and Horsehead Nebula, since they’re super easy to find right there next to Altinak.  I could just make out the Flame Nebula in the frames where the background wasn’t blindingly bright, but Altinak is so bright too.  We’ll see what stacking and processing can do. 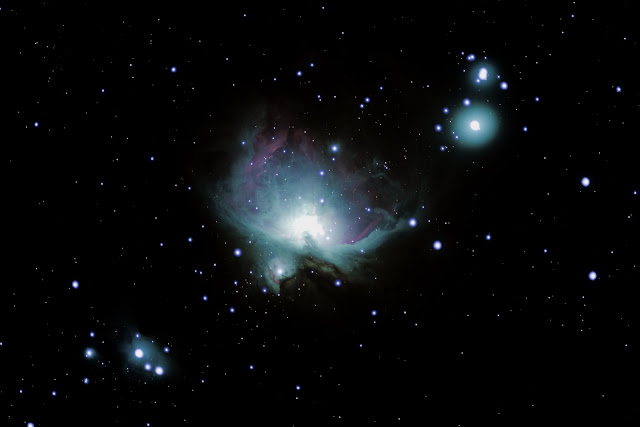 [There were some thin high clouds that made some interesting halos around the brighter stars, but overall not bad!]
M42 Orion Nebula, Nikon D5300, Vixen NA140ssf
21x60s, ISO-1600

After getting 40x90s images on Flame/Horsehead, the clouds began to reappear, so I packed up around 10:30 PM.  Not a bad night!  I meant to also test how long the tracking is good for on the memorial scope so I’ll know if I need to even guide or not, but I forgot at the end, and it was getting a little cloudy anyway to be able to make out exactly how round the stars would be.  But Jim said he plugged the Malincam into it back in November and had nice round stars at 3 minute’s exposure.  So I’m curious to see whether I’ll even need to guide with it. 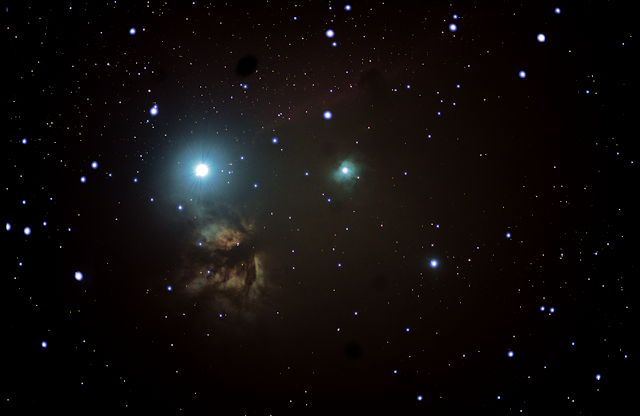 I’ll see if I have time to process the images in the morning; I don’t expect much, but why not.  Can’t wait for a darker night!  And probably a CLS filter.

Table of Contents
Posted by AstronoMolly at 5:14 PM