I invited my friend Emily out, since it was a weekend night, and she’d expressed interest in coming even just to enjoy the stars and take some long-exposure Milky Way images on her DSLR.  It was fun having her out there.  I already had my gear set up, so I just had to reconnect and rearrange everything from where I’d stored them underneath of covers.  I did also re-align though, because I suspected that I’d accidentally used the wrong star for polar alignment – and this did indeed turn out to be the case.  After that, guiding and tracking went smoothly.  I decided just to do one target, since I was going to do a half-night and leave around midnight: the Bubble Nebula again.  So I took 30x5-minute exposures.  They came out well, but the result was super noisy from me suppressing background and bringing out signal.  I might re-process it and see if I can do any better. 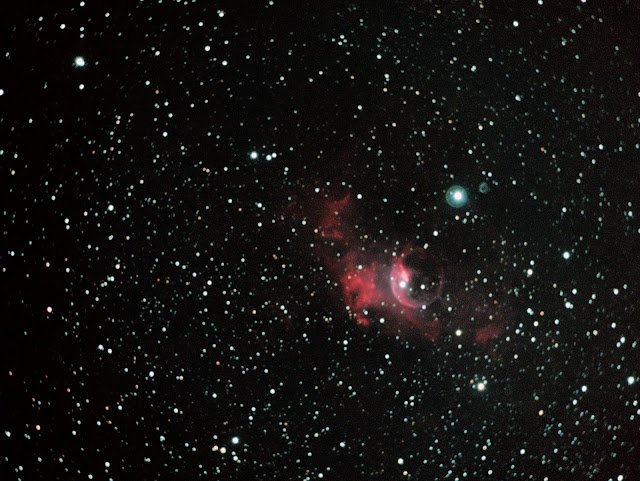 Also, for the record, saturated stars look way cooler on Newtonians with the diffraction spikes than on SCTs with the weird glowy donut.
While the pictures were going, I set up my binoculars on a tripod I bought from a guy at the star party I went to recently, finally!  Man is the view fantastic through those.  I also set up my D3100 (which I think I’ve decided to keep for doing wide-field images while I do telescope imaging to keep me occupied) on a tripod with the 300mm lens in a super-short exposure experiment of the Plediades Cluster.  I went and adjusted it every few minutes, since it was just on the tripod, and I stacked like hundreds of them, but it came out terribly.  Oh well, it was a good experiment nonetheless.

Table of Contents
Posted by AstronoMolly at 6:35 PM