Labor Day weekend is always a fun camping weekend out at the observatory.  Several of the club members bring out their trailers and tents, and we barbecue brats and make s'mores if it's cloudy over the fire.  The forecast was showing that Friday and Saturday nights would be cloudy, and that Sunday had potential, but the moon is at third quarter, so we'd only get a few hours of astronomy in before the moon came up even if it was clear.  I brought out my camera bag and tablet just in case, but was expecting to be toasting marshmallows over the fire.

This weekend was also a good opportunity for me to try out my new tent, the Coleman Dark Room Sundome.  It's a black tent that was designed for festival-goers wanting to sleep in in the morning, or parents who want to put their kids to bed early while camping.  It's supposed to block 90% of the sunlight, and keep it cooler inside.  It's also perfect for astronomers at star parties!  I previously used my 1-person backpacker tent when I would camp at the observatory, and even though it was in the shade of one of the outbuildings, it was still tough to sleep in in the morning.  Plus, I couldn't fit an air mattress in it.  But the new tent worked great! 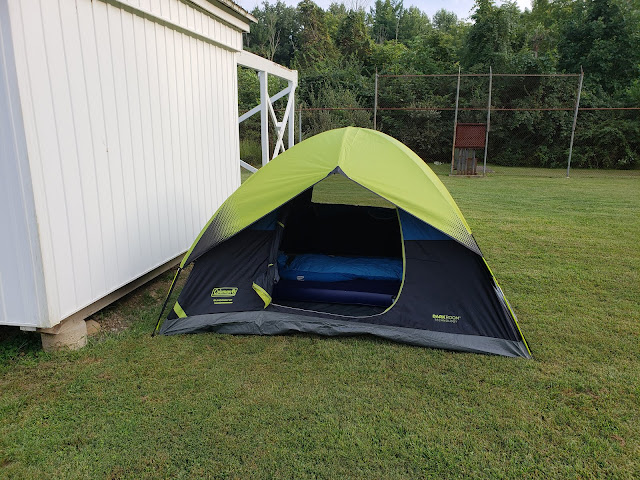 The underside of the rain fly is black too, and the lighter color on top helps deflect some of the heat and light.

It was fairly dark in the morning, and it wasn't too hot.  In combination with my sleeping mask and ear plugs, I was able to sleep in until at least 9:30 every morning this weekend.  If it were cooler, I probably could have slept longer, but it only got down to the upper 60s each night.  Sleeping on the air mattress was a lot nicer than my self-inflating sleeping pad.  And there was tons of space in the tent (it's a 4-person tent), so I had plenty of room to keep all of my clothes, shoes, and everything else dry.

It was cloudy in the evening as predicted, but the clouds weren't very thick, and several holes opened up in the sky.  Behind the clouds, we could see a lot of stars - transparency was really good!

A frame from the timelapse I took.

Around 11:30, the clouds had pretty well cleared out, and the sky was gorgeous!  It was the most amount of stars I've seen out at the observatory in ages, due to this persistent high haze we've had for the past several weeks.  We could see the Milky Way pretty well (although, "pretty well" in these Bortle 5 skies means we can tell that there's a higher density of stars...almost just looks like a thick contrail...).  Since I'd brought my camera bag along, I decided to go ahead and open up the club's memorial scope dome and do some imaging!  I got my ZWO ASI1600MM Pro camera and my new QHY5L-II guide camera set up on the telescope, and I started imaging the Wizard Nebula, NGC 7380, after another astrophotographer in my club had recently produced an awesome image of it.  I got 15x300s frames on it before the moon came up.

I realized while I was processing it that since I recorded the lights in SharpCap instead of my usual Sequence Generator Pro, I forgot to switch the bit depth from 8-bit to 16-bit (I use 8-bit usually on SharpCap for when I do planets and the moon, since you don't need the bit depth).  So that bites.  I didn't want to go take a bunch of 8-bit dark frames, so I just decided to stack it without any calibration frames.  You can kind of see it... 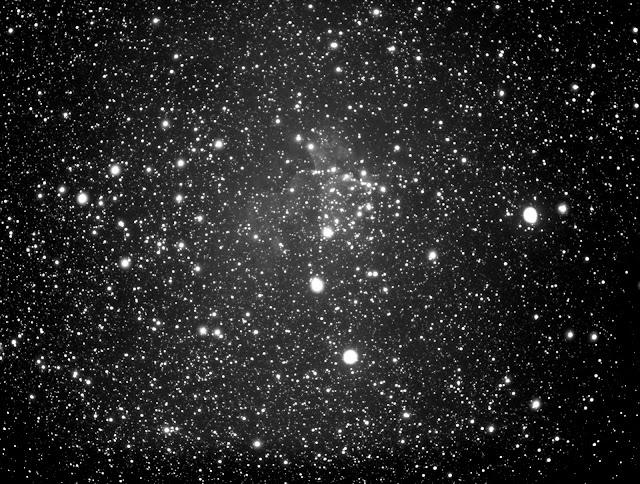 The moon was coming up soon, so I decided to do an experiment: short exposures, but tons of them, on my ZWO ASI1600MM Pro.  I've seen some incredible images of things like the Dumbbell Nebula and the Ring Nebula made from hundreds of exposures less than 30 seconds, sometimes as short as 1s.  I set the exposure time to 20s and the gain to 300 (which is the "lowest read noise" setting on my camera), and away it went!

I collected 246 of them before I packed up to go to bed at 2:30 AM.  When I processed them the following Monday, I painstakingly opened each of them to go through and delete the ones with tracking errors or that just looked mushy.  I was left with 220 after this.  I realized though that I didn't have any 20s darks, so I put the camera in my closet and took some dark frames.  Since it was so warm this weekend, I only took the light frames at -15C, which is reachable without having to use the fridge.  The camera body was pretty toasty afterwards, but it did reach -15C on the chip! 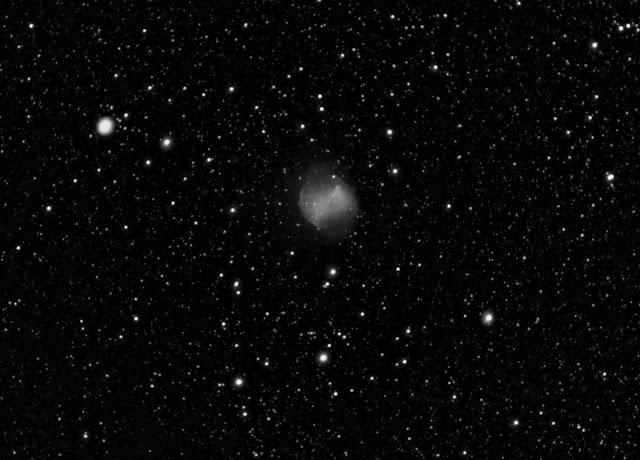 So it didn't turn out as cool as I'd hoped.  This is about what I'd expect for any 20-second image.  It doesn't help that blue is not well-focused in this telescope.  Oh well, worth a shot!

Before I shut down for the night, I also grabbed a set of images on the nearly-third-quarter moon.  Beautiful as always!  Even when it ends my imaging sessions early... 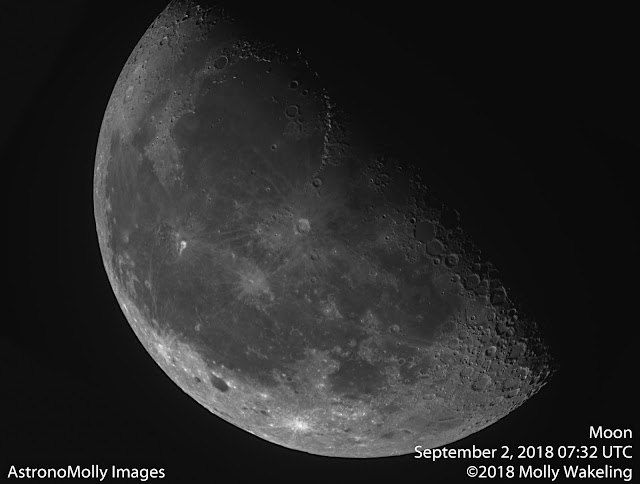 Table of Contents
Posted by AstronoMolly at 5:17 AM