The moon is starting to get bright, which is limiting the amount of time I can image.  It kills me that it's so clear and I can't image!!  It feels like wasted time!  My first two targets of the night, M27 Dumbbell Nebula and the Eastern Veil Nebula, are too close to the moon and would be washed out, but the Cocoon Nebula was a healthy distance away, so I just unticked those two targets so that it would start right away on the Cocoon Nebula (which was high enough to image).

When I went to connect everything, the autoguiding program PHD2 didn't want to talk to the guide camera again (even though it connected just fine), so I restarted PHD, and then it worked.  Guess I'm going to just have to do that every time.  And SequenceGenerator Pro, so that it doesn't point my telescope at the ground on the wrong side of the meridian...

I had another fully clear night ahead, and the moon would be setting around 2:30 AM, so lots of imaging to be done still, all without me having to do things :D  The cooler had brought the camera down to -15C by the time it was done slewing to the Cocoon Nebula and plate solving, and away it went!  Watching PHD run by itself is so cool...when SGP changes targets, it pauses the autoguider, slews, and starts re-capturing frames, acquires a guide star, and starts guiding, all without any of my input.  All I have to do is connect the hardware.  (And I don't even think I have to do that -- I have which profile I want to use connected to my equipment profile in SGP, and I think it will connect them for me if I let it).

I wound up staying up until about 11:30 PM catching up on blog posts and finishing the processing on the Western Veil Nebula dataset I still had leftover from the Texas Star Party.  So I remoted into my tablet using TeamViewer on my phone and watched it change targets to M33 Triangulum Galaxy.  What an age we live in :D  It failed to solve the frame, and the frame looked blank!  I flipped over to PHD to see the guide camera's view, which looked like it was partially blocked.  So I ventured outside in my PJ's and outside slippers, and saw that M33 hadn't cleared my neighbor's garage!  Transit times have gotten early enough from when I first wrote the sequence that now M33 is starting before my telescope can actually see it.  So I used an app on my phone to measure the angle above the ground that the garage cut me off at, and then looked in SkySafari to see when it would clear that altitude, and set that as the start time for the target.  It had to clear about 50 degrees in altitude, and that would happen around 12:15 AM, so I set it, and went back inside.  This is probably why the log showed it failing to plate solve a couple of times last night as well.

I was about to head to sleep when one of my cats (Orion) threw up!  He ate his crunchy food too fast after I fed them before bed, and threw it all back up.  I'll get to bed at some point...

Oh, I forgot to mention on Saturday: I finally put together something I've been wanting to do for a long time, which was a power cable box!  Previously, I made some progress on solving my cable mess by creating a cable bundle with some self-closing cable wrap, which has done a lot to make my setup better.  But my power cables were still an absolute mess, and now that my scope is going to be out in the backyard for long stretches (including through rainshowers, thanks to my Telegizmos 365 cover), I needed to do more to protect my electrical connections.  So I bought a large rainproof power cable box on Amazon, and neatly tucked my power strip, AC-to-DC converters for the mount and dew heater, tablet plug, RoboFocus plug (which currently doesn't work), and camera power plug into the box, utilizing additional velcro cable ties to keep bundles together. 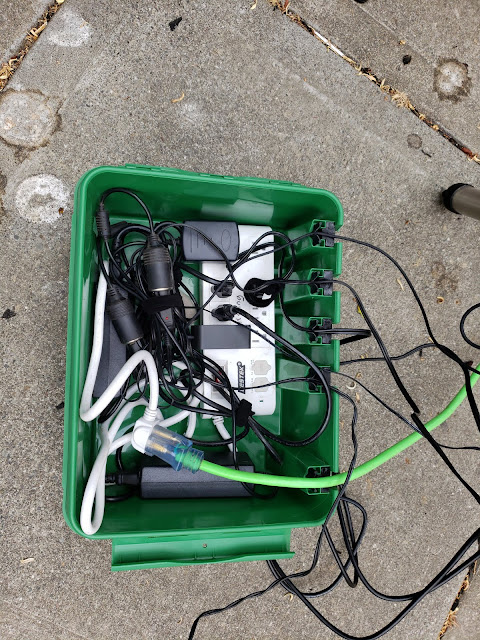 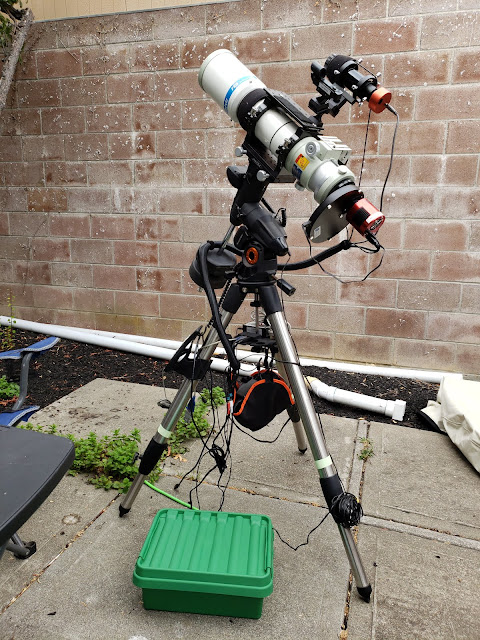 At last, less mess!  Now I just need a way to attach my cable bundle to a moving part of the mount somehow so that I can prevent it from getting yanked, and I'll be good to go!  It's laying on top of the counterweight bar at the moment because otherwise gravity pulls on the cables, which will disrupt guiding and stuff like that.  Of course, doing that gives it less play, so it ends up pulling tight when I point due south and low (which none of my targets are, but during alignment it was a problem).  And sometimes it catches on the polar alignment adjustment screws as the mount swing around, so I have to guide it by hand right now (which is not conducive for future meridian flips, once I finish fixing the declination axis issues).

Bring on the clear skies! 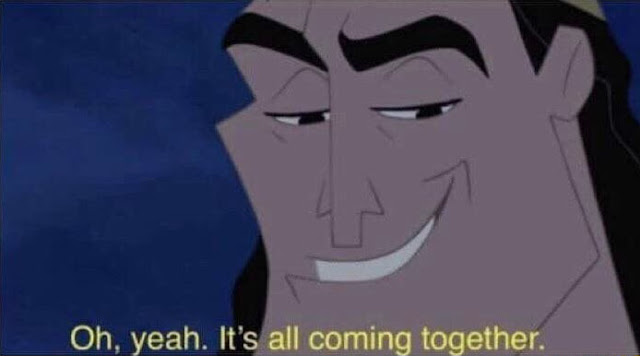 Because I'm now in a full-moon break, I went ahead and processed M33, since I have by far the most number of frames on it.  7 hours of frames passed through my inspection and quality control in PixInsight!  That's the longest image I've ever done :O  Very exciting.  And the result was even more exciting.  Remember, now this is from Bortle 7 suburban/urban transition skies of the East Bay area, well within the light dome of San Francisco, Oakland, and all of the other 7 million people that live around the bay. 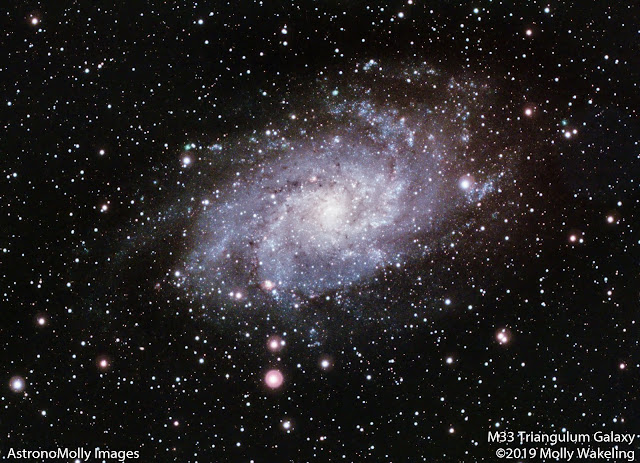 Look at this!!!  I can't believe this came out so well from inside the city!!  This is very promising, very promising indeed.  And this is just with a light pollution filter, no narrowband or anything!  (Actually, I don't even have an IR-cut filter on here yet -- hence the weird star halos.  I'll be rectifying that this weekend).  Lots of detail came through, helped by the good tracking on my mount.  Those stars were perfect circles!

M33, the Triangulum Galaxy, is located just 2.7 million lightyears away.  It's a member of our Local Group, the third largest after our own galaxy and the Andromeda Galaxy. It's located behind the constellation Triangulum, which is below the midway point between the W-shaped Cassiopeia and the prominent square of Pegasus. It's about 60% the size of our own Milky Way, but contains only a tenth as many stars. It has a number of fascinating structures and giant nebula that can be seen even in amateur images.

Posted by AstronoMolly at 9:04 PM