I slept in from Friday night's adventures at the Hidden Hollow Star Party, but not too long - only about 8:30 AM - because I needed to shower, eat breakfast, and attend the talk before my talk, which was scheduled for 10:45 AM.  The talk before mine, starting at 9:30, was about the International Dark-Sky Association.

As I was getting set up after that talk, suddenly the projector died.  We worked on figuring out what was wrong with it when we realized that the lights had also gone out and my laptop wasn't charging - the whole building lost power!  And we found out that actually the whole camp had lost power.  Crap!  Luckily, someone down the hill at the lodge had a generator, so we moved the whole operation down there.  It was loud in the lodge with other people eating lunch and talking, so I had to talk loud, which luckily I'm pretty good at.

My talk was on "Astrophotography Without a Telescope," which was great for this star party because it's mostly comprised of visual observers, many of whom have some interest in trying astrophotography but don't really know where to start.  I talked about things you can do with just a DSLR and a tripod first, like star trails, timelapse, and short-exposure (15s or less) ultra-widefield.  Then I talked about tracked exposures using something like the Vixen Polarie or the Skywatcher, as well as piggybacking onto a telescope on a tracking mount.  I need to update the timelapse post to include using the Windows app Timelapse Deflicker, which has been awesome, and I need to write one about tracked and piggybacked configurations.  The talk went well, and hopefully now more of the folks there will give it a try!

As night fell on the third night of the Hidden Hollow Star Party, it was miraculously kind of clear again, except some clouds skirting the horizon.  Off to the north, we saw nearly-continuous flashes of lightning, but it looked like it was mostly moving eastward, and we couldn't hear the thunder, so I went ahead and pulled the cover off my scope.  I had a few folks around my rig, and I showed them how I polar align, align, and set up guiding.  Polar alignment went well - I was able to get within just a couple arcseconds of the pole.  Woot!  (Also getting the paid version of SharpCap to get access to the polar alignment routine is 100% worth the $15/year fee). 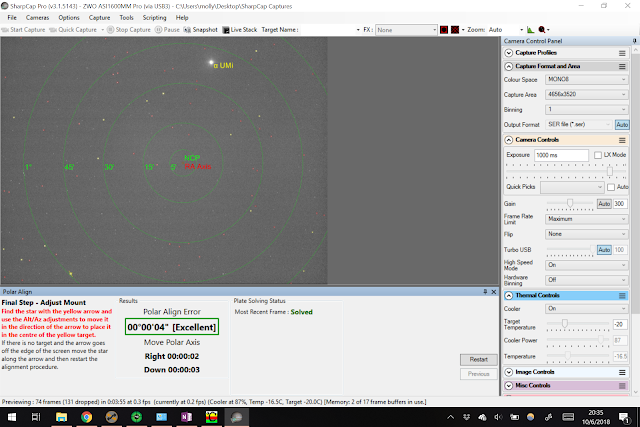 The bright star near the top labeled "a UMi" is Polaris, the North Star.  As you can see, it's not quite at the North Celestial Pole, only close to it.

Shortly after I slewed to the Western Veil Nebula and calibrated PHD for autoguiding, however, the lightning started to get very close and we heard some thunder as the storm turned south.  I quickly homed the scope, covered it, threw my tablet into my accessory bin, latched everything up, and ran inside the nearby education building just as it started to rain.  Darn!

Inside, someone had started up The Martian on the projector screen, so I watched the second half of that, and then poked my head back outside to see how the weather was.  It had cleared up again, I was back in business!  It took only 5 minutes for me to uncover the scope, re-connect my tablet, slew to the Western Veil Nebula, and start acquiring images.  Since I had only one night left, and the sky conditions weren't great, I decided just to take red, green, and blue data, and no luminance.  There was also a ground-level fog that I was looking through.  But I wanted to see what I could get anyway.

I went and sat inside because it was so wet outside, both from the rain and the very high humidity.  When I came back to check later, I discovered I'd lost about 15 minutes worth of frames when my mount randomly stopped tracking.  Either that, or PHD got crazy and guided away, or something like that. 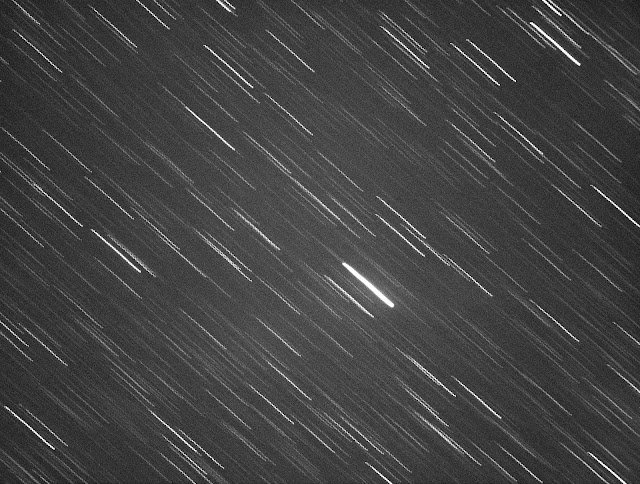 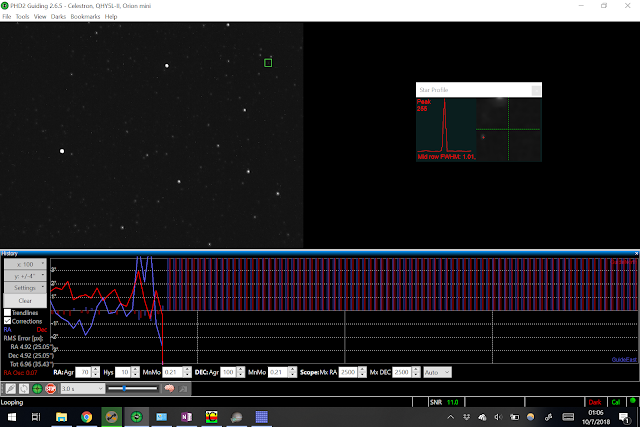 Luckily, I just did a Precise Goto and got the target back in the center of the frame, and everything was fine after that.  Weird.

Around 1:30 AM, it actually cleared out pretty well, and the sky looked great.  But that was short-lived; at 2 AM, the fog came in thick, and I had to throw in the towel.  But I had captured 15x180s frames on each RGB channel, so I could probably get something out of it.

After I got back from Hidden Hollow, Monday was a holiday, so I spent the day processing data.  This dataset proved a little difficult, as I imagined.  I had to ditch some frames for poor tracking when the guide star was lost due to bad atmosphere.  They were also fairly noisy because I accidentally left the gain at 300 from when I was doing polar alignment and wanted short exposures to make it go quicker.

First, I had stacked the frames in DeepSkyStacker using the "median kappa sigma clipping" algorithm and a 5% star detection threshold, but the final image came out prettttty noisy, and it also had a high background from the fog.  So I stacked the RGB images each again with my other favorite algorithm, "auto-adaptive weighted average," and a higher star detection threshold of 10% (the 5% was giving me like 10,000+ stars, which I didn't really believe).  These were less noisy, although of course the background was still high.  The target is just a little too big for synthetic flats to work well, so there's some glow toward the center, but really this came out rather well for the atmospheric conditions!  If I really stretch the image, you can see some of the Pickering region below the main part of the Western Veil. 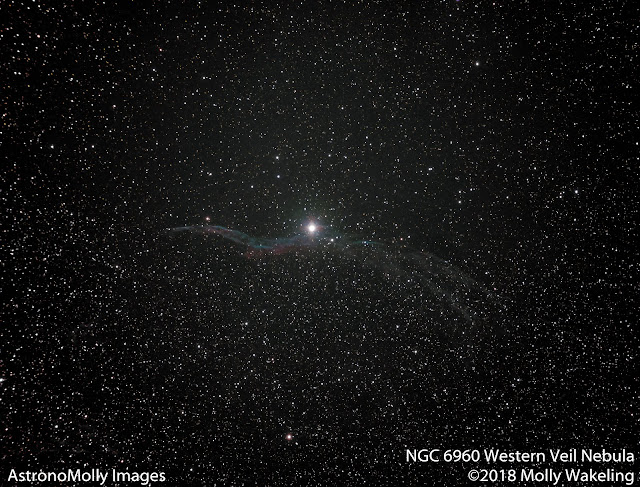 So yay, I got something out of that soggy weekend!  I've also got a bunch of frames from my DSLR attached to my Vixen Polarie of the Cygnus region, but I didn't happen to have dark frames with the same exposure time, and the nighttime temperature went from the 60s straight down to the upper 30s, totally skipping the low 50s it was when I originally acquired that data on Thursday night, so I'm going to have to wait for it to warm back up a bit.

And finally, I got some timelapse images as I always do, so here's the video!

There's a sequence in there where it started to rain like crazy.  It had looked like it was going to rain earlier, but I still wanted to image it, so I ran back up the hill and grabbed the water-resistant cover that came with my camera bag.  I secured it to my DSLR with rubber bands and gaffer's tape.  It worked great! 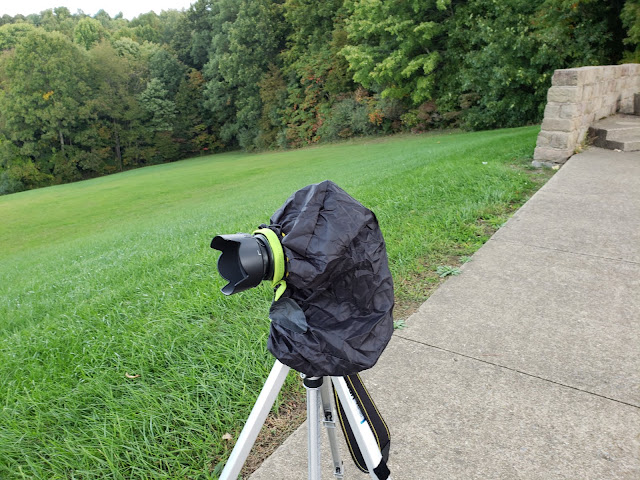 I had to jury-rig the lens hood to that lens though - the lens hood belongs to my 55-200mm lens, and the 18-55mm stock lens doesn't have a connection for a lens hood.  Again, gaffer's tape to the rescue!  It kept most of the rain off the lens, although I had to wipe off a few drops after the rainstorm (as you can see in the video).  Now I have a way to image during possible rain and not have to worry about the camera, woot!