Right now, Mars is headed toward a very close pass with the Earth - it will be at opposition (opposite the Earth from the sun) on July 26th, and perihelion on September 15th (closest approach to the sun in its elliptical orbit).  Between these two events, it will come close to Earth's orbit indeed on July 31st, and provide excellent telescopic views all summer long. 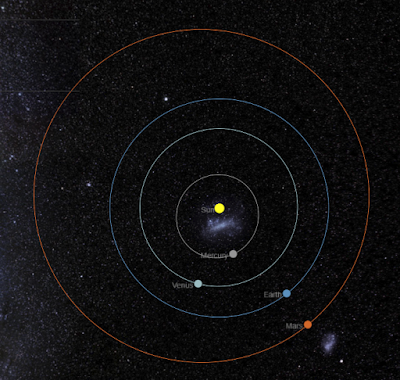 As Earth and Mars go around in their orbits, Mars reaches opposition with the Earth every 26 months, since the Earth orbits the sun faster than Mars does.  Because planetary orbits are elliptical, opposition is not always in line with perihelion - you can see in the image above how far apart Earth's and Mar's orbits can get.  But every 15-17 years, opposition and perihelion occur close to each other, and we get a big, bright, beautiful Mars to see in the night sky.  The last time this happened was July 2003, which was a particularly close pass, even closer than this one, due to some tilting in the planet's orbits as well, and the tug of Jupiter.

When it is closer to Earth in its orbit, then it appears larger and far brighter than usual.

The " symbol after the number for diameter means arcseconds, which is a unit of apparent size.  There are 60 arcseconds in an arcminute, and 60 arcminutes in a degree.  For reference, the full moon is about half a degree (30 arcminutes, or 1800 arcseconds) across.  Distance here is measured in AU, or astronomical units, where 1 AU is the average distance of the Earth from the sun, or 93 million miles.

Bottom line is, now is a great time to look at Mars through a telescope!  But you have to stay up late to do it - right now, it doesn't rise until 11 PM, so it's not high enough to see clearly through the atmosphere until about 2 AM.

In order to image it, this meant that I needed to get up in the middle of the night to set up my telescope.  So on Wednesday night, I set my alarm for 2:30 AM!  I got up, got dressed, and hauled all my gear downstairs that I'd set out in my living room before I went to bed.  It took about 20 minutes to get everything set up.  In addition to Mars, however, there was another fun sky event occurring that night - a close pass of the moon and Saturn!  They were only about a degree apart.  So before I set up my 8-inch Schmidt-Cassegrain to image Mars, I set up my Borg 76mm refractor to image those two together, which has a much larger field-of-view.  I was going to get a full color set of data on it with my ZWO camera, but they slipped behind the roof of my apartment building before I could finish recording the dataset.  So the image is monochrome luminance only.  But still really cool! 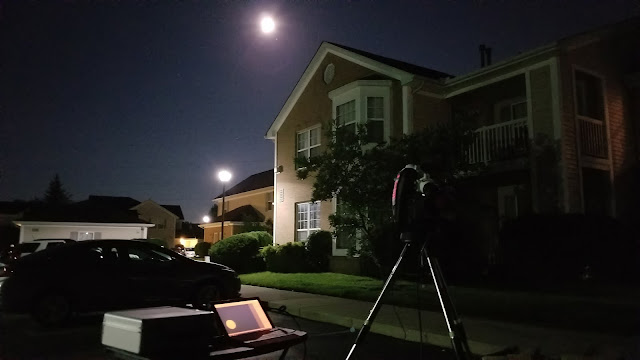 Celestron NexStar SE mount with my Borg scope on it and ZWO camera; tablet is on a folding table beside it.  Above the apartment building, you can see the bright moon and the little dot of Saturn down and to the right a little.

Now, since the moon is far brighter than Saturn - with the moon at magnitude -12.4 and Saturn at magnitude 0, this means the moon is 91,252 times as bright - I had to take two different exposures in order to see both of them, a shorter exposure for the moon, and longer for Saturn. 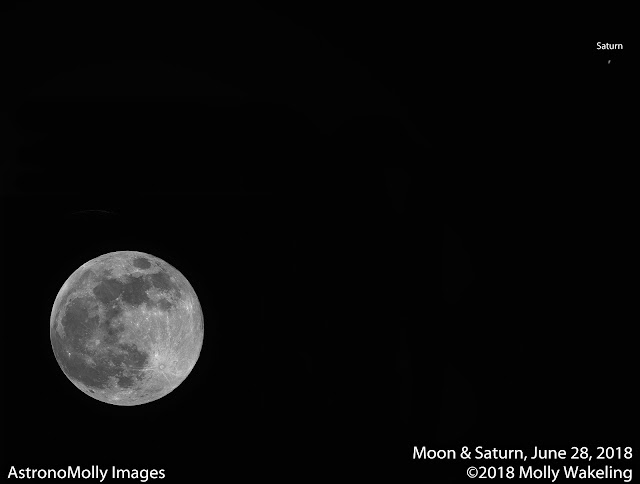 For some reason, I couldn't get the video file with the Saturn-length exposure to load in RegiStax (it kept crashing), so I just took a single frame.  It's so small that you won't really be able to see the atmospheric distortion in a single frame anyway :)

After that was all done, I took off the Borg refractor and attached my 8-inch Schmidt-Cassegrain reflector, and screwed my Barlow lens onto the connector for my filter wheel that's attached to my ZWO camera.  But first, I put in an eyepiece so I could center Mars in the view rather than try to find it with the camera attached - and so I could take a look at it with my own eyes.  Unfortunately, there's a rather large dust storm happening right now on the Martian surface, so it's hard to make out fine details.  But the "seeing," or atmospheric stability (here on Earth) was very good - I put on my highest magnification eyepiece, which makes my system 333x, and it still looked good.  Good seeing makes for great pictures! 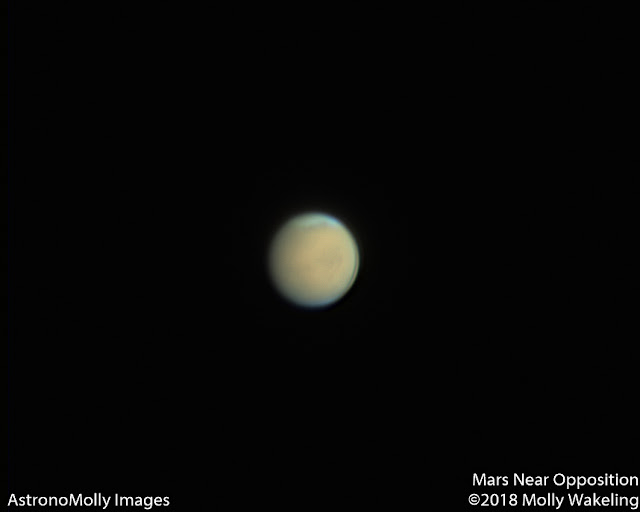 South is up in this image, and you can see the southern polar ice cap quite prominently.  You can also make out some geography, including Valles Mariners, or Mariner Valley, toward the left side, and some darker-colored areas toward the right.  When I was processing this in RegiStax, a weird sort of effect kept showing up on the right side, almost like ringing or something, but I haven't been able to get rid of it yet.  Maybe it's a weird artifact of using my Barlow or something.  Oh well.

I packed up around 4 AM, went to bed, and tried to grab a few hours of sleep before getting up for work, but I couldn't really fall back asleep.  So Thursday was a sleepy day!  But totally worth it! 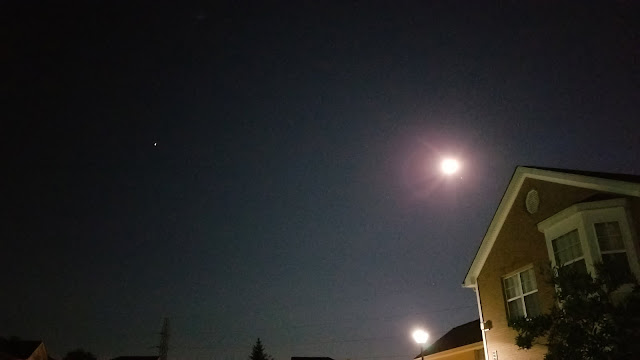 Mars is on the left, with the full moon and nearby Saturn on the right.  The bright light in the lower part of the image is Planet X. 🤣

Table of Contents
Posted by AstronoMolly at 9:44 AM