Friday night, I was exhausted from my busy week, but all the forecasts were looking so good, and there was no moon, so I just had to answer the call!  I cleaned my blue filter with some distilled water and a cotton swab, and then dried it with a clean paper towel and let it air dry, and there were no streaks.  I packed up the CCD camera and headed back out to the observatory, where now not only Jim, but a few others were camping as well.  I didn't get out until after dark because eating dinner is fairly important, so I got set up as quickly as I could.  I've gotten my process down pretty well now on the memorial scope.

I started with the blue filter on M33, but it looked just as bad as usual!  So I threw up my hands and decided just to re-take the luminance frames, in better focus.  I borrowed Jim's Bahtinov mask to help with focusing (see this post for more on what a Bahtinov mask is).   Those looked pretty good.  While they were going, I was deciding what to do next - take L frames on another target, or use my DSLR?  Jim mentioned that he had a hydrogen alpha filter he was trying out with his Mallincam earlier in the week, but he didn't have it pulled out Friday night because he was tired after several nights of observing all week.  I eagerly asked if I could borrow it - I've never tried narrowband imaging before, and I was anxious to try!  And the memorial scope was the perfect platform to test it on, since it usually has the superb tracking and guiding that is necessary for narrowband imaging, where you have to take very long exposures.

So what is narrowband imaging?
So let's say you have a monochrome CCD camera.  In order to get color, you put red, green, and blue filters in front.  These are considered "wide-band" filters, since they allow a large swath of wavelengths that are considered in the red, green, and blue regions.  Now, a lot of stuff in space emits on very specific wavelengths.  Take hydrogen, for example - all of the red you see in nebulae like Orion and Rosette and those gorgeous red blotches in galaxy M33 are coming from a specific energy transition of hydrogen atoms, known to astronomers as hydrogen-alpha, or H-alpha for short.  (Also known as H-II to most other physicists and chemists).  For anyone who remembers their high school chemistry, the red light is emitted when an electron excited to the second excited state decays down to the first excited state. 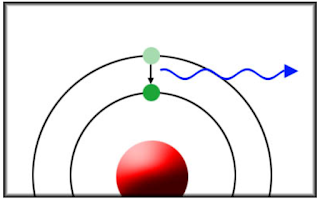 An illustration of an electron changing energy states and emitting a photon (light).  Taken shamelessly from Starizona.
The energy of the light emitted corresponds with 656.3 nm (nanometers), which is deep in the red to us humans.  The greenish-blue in many nebulae comes from the oxygen-3, or O-III transition for short (500.3 nm, green).  Other important emission lines include sulfur-2, or S-II (672.4 nm, deep red), hydrogen-beta (486.1 nm, blue) and nitrogen-2 or N-II (658.4 nm, red). 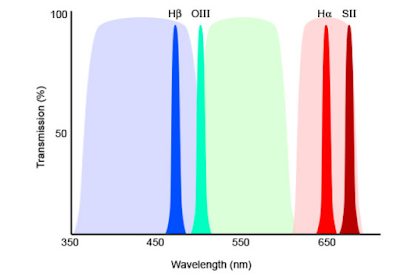 Spectrum of some narrowband filters, with red-green-blue filters in the background for comparison. Also taken shamelessly from Starizona.
After the images are acquired at a few of these narrowband wavelengths (usually H-alpha and O-III, and then combined with LRGB), you can get exquisite detail on many kinds of deep-sky objects.  Many of the Hubble images you are probably familiar with use narrowband filters - however, in order to more easily identify differences between the different gases in a given object, false colors will be assigned to each narrowband color channel, hence why Hubble images of things we usually see as red (like the Bubble Nebula below) will look blue instead. 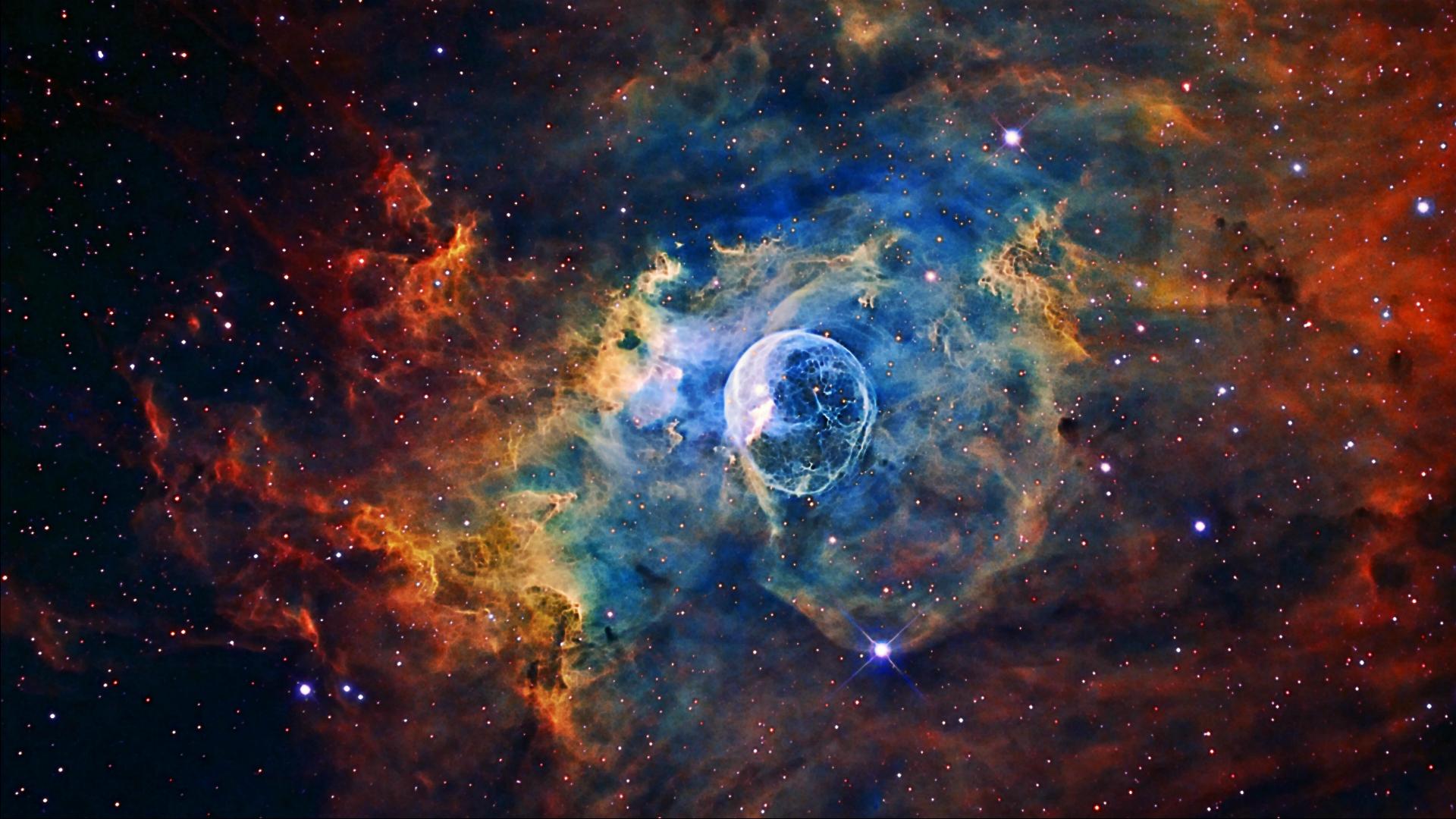 Bubble Nebula with the "Hubble pallette" of narrowband color assignments 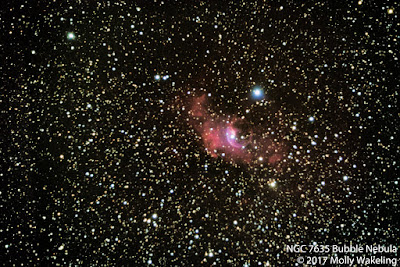 Bubble Nebula, as seen by my DSLR

One of the huge advantages of narrowband imaging is totally knocking out light pollution.  Since the filters select a very narrow range of color, there is very little light pollution to enter your image.  To make up for it, though, you have to take much longer exposures since you are cutting out most of the incident light - 15 minutes or more, usually.  So it can be very time consuming.

I'll do a more detailed post on narrowband imaging when I get further along in practicing it!

So my first attempt at narrowband imaging was less than fruitful.  The H-alpha filter specifically was the Meade CCD Interference HA-50 Visible - A/R Coated filter, which is a little wider than some others (so I'm told - it's hard to find info on it, as it's been discontinued).   I thought I had the camera focused pretty well (again using the Bahtinov mask), but the images look kind of soft.  And even with 15-minute subframes, I didn't get very much light from the deep-sky objects I tried.  Orion wasn't quite up yet, so I went with the Veil Nebula.  I left it monochrome since I don't have RGB data on the Western Veil Nebula with the CCD camera yet.  I've seen people use H-alpha as their L frames since you can get much finer detail, so I might give that a go at some point.  Or they'll add H-alpha to their LRGB data.  Lots of things to try. 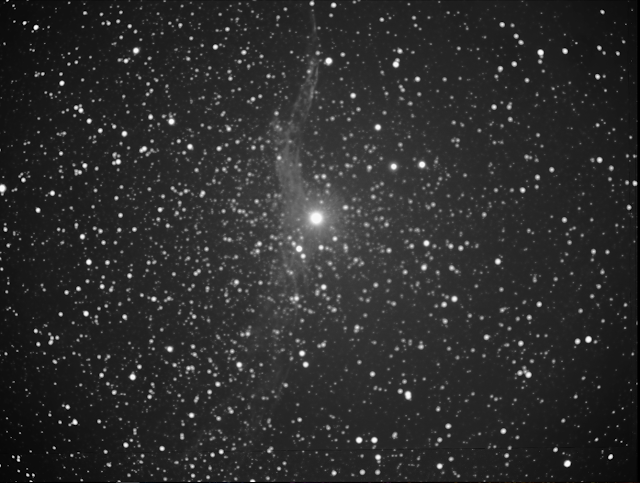 It might work better with some like the Bubble with more H-alpha, or Orion that is just brighter.  I also tried imaging the Flame and Horsehead Nebulae (Horsehead is more H-beta, but Flame is mostly H-alpha), but the scope started not tracking well again, and it was nearing 2 AM, which is my make-or-break point for either driving home or staying the night.  I had some plans for Saturday, so I left.  But I shall have to experiment with this more.  In addition to the other troubles I had, the sky transparency wasn't very good, which didn't help, of course.

Next post: A Super-Duper Primer of Astrophotography Part 11 - Timelapse Photography

Table of Contents
Posted by AstronoMolly at 6:43 PM