During the day, Jim pulled out the Lunt solar scope and put it on the club’s Celestron NexStar mount.  We observed it visually first in H-alpha, and I learned that you turn the pressure tuner in order to change the wavelength slightly (like, tenths of an angstrom) in order to see granularity or prominences more clearly.  I tuned it to granularity, and you could see visually like little black spots all over the surface.  I attached the QHY5, focused, and took some data!  It looked awesome on the screen.  The camera could see it really well.  I processed it in RegiStax, and it came out great!  I ended up not having a whole lot of frames though, since I took only 2-minute videos (clouds were rolling through), and I didn’t realize my frame rate was only 2.8 fps.  I figured out on my own how to colorize it in Photoshop – some of the online tutorials weren’t doing very well (like, the sun would be the right colors, but then the black background would also be colored if I used the method of changing input/output values for the RGB channels in the Curves editor).  I went to Color Balance, and just moved the sliders myself until it looked good.  I saved screenshots of the numbers for future use.  I also applied a sharpening algorithm. 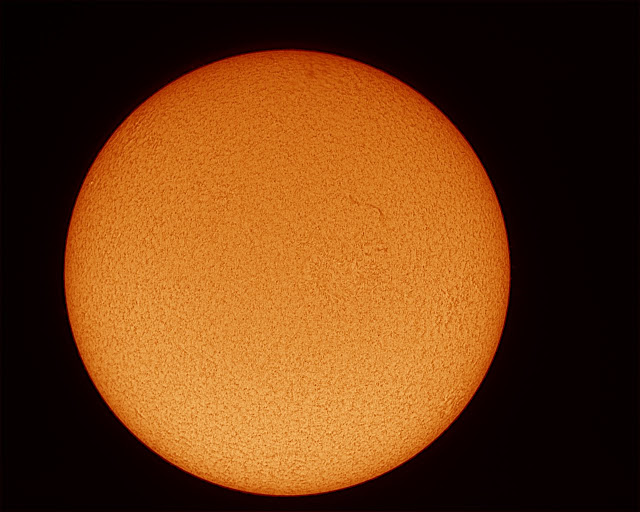 I think the colors came out nice for just guessing!  I just wanted it to look “sun-like,” the way NASA colorizes their solar images.  The dark vein up and right of center is a prominence (called a filament when viewed on the front of the sun like this), so I grabbed my 2x Barlow and zoomed in on it. 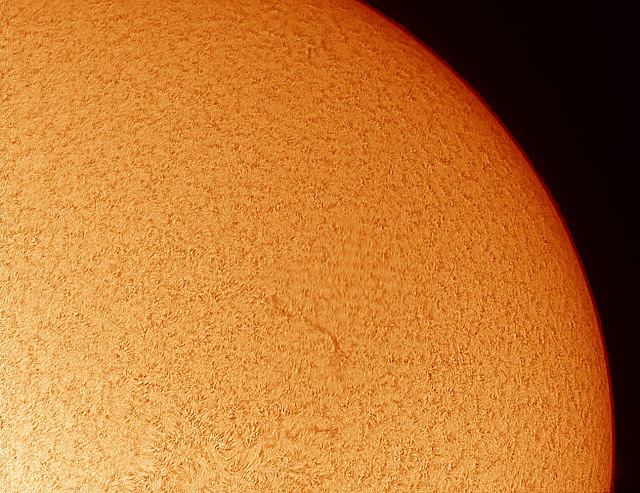 I got some of what are called Newton’s Rings, which I read about in a solar imaging tutorial I was reading to see how they colorize their images.  Stacking got rid of most of them, but you can still see them in the center.  They're a result of reflections between the camera and the Barlow lens, and can be mitigated (I learned later) by tilting the camera inside of the connection tube so that it's not entirely flush with it.
Night fell, and it was partly cloudy and the moon shone like crazy.  Every time I stepped out of the dome, I thought someone had their headlights on!  So I decided to run some tests of the memorial scope – I wanted to see how long it could guide for.  So I synced it on Deneb, and then imaged the Pelican Nebula at increasingly long exposure times, up to 20 minutes!  Even at 20 minutes, it was still going strong.  Stars were slightly elongated, but only very slightly, and only if you zoomed in really close.  The wide FOV helps of course, but that is very promising for when I eventually give narrowband and RGB imaging a try, or when I’m using a smaller chip CCD and have a narrower FOV. 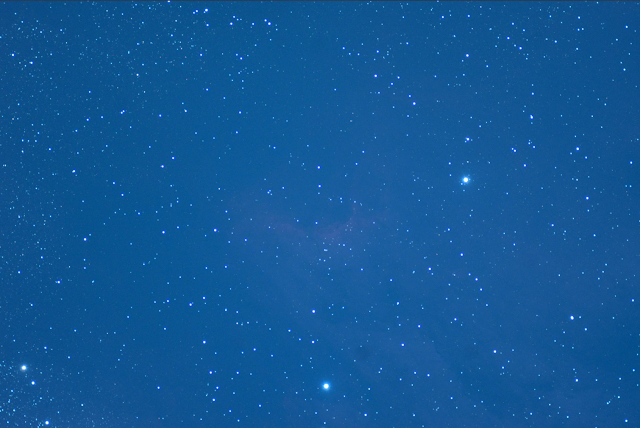 20-minute exposure of the Pelican Nebula to test out guiding on the memorial scope, unprocessed
1200s, ISO-500

That night, I waited until the moon set around 3 AM, and then started imaging.  Clouds had been drifting through as well, and it was shortly after Bob went to bed that it quickly cleared up, of course.  It’s a holiday weekend, why not stay up all night?  I haven’t gotten a proper image of M17, the Omega/Swan/Checkmark Nebula since I’ve been able to guide, so I decided to take some images on it, even though by 3 AM it was getting lower in the sky, and more toward the main source of light pollution.  I only got about 13 images on it before it got too low and into the mush.

It came out quite red – more red than I’d captured previously.  I didn’t really get much of the dimmer outer portions, but I got some nice detail in the main part.  The Astronomy Tools kit worked great on the light pollution. 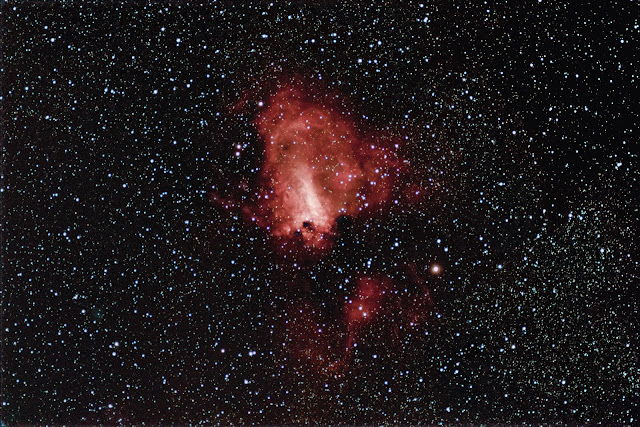 So not much to show for the long 4th of July weekend, but it wasn’t bad.  It would have been great if not for the moon because we did have quite a bit of clear sky time.
I packed up my camping gear on Monday morning and went back home, since the moon was going to be up all night anyway, and I should still probably be getting some higher-quality sleep in my bed.

Next post: A Super-Duper Primer of Astrophotography Part 8 - Post-Processing with Freeware

Table of Contents
Posted by AstronoMolly at 10:00 AM