Another club member, Ray, was using the memorial scope until about 10:30 PM, and the sky was covered in high clouds anyway, so I did some timelapse looking toward the Orion nebula.  I also tried to set up the Meade refractor that’s on the CGEM mount, but I couldn’t get a guidescope attached to it.  I looked at some things visually through the big Dob the club owns – M42, and galaxies M81 and M82.  I also looked at Jupiter in the memorial scope and club member Mark's SkyBridge.

After Ray left, it was still cloudy, so I decided just to check out a couple visual things while the timelapse went.  I synced to Dubhe in Ursa Major (Jim figured out the bad gotos by the way – using “warm restart” keeps the previous pointing model, which messes up a new night.  So use “cold restart” instead.), and then plugged in the celestial coordinates for Comet 41P/Tuttle-Giacobini-Kresak and went hunting for it with a 38mm eyepiece.  There were a few things that caught my eye, but nothing that really had any discernible nebulosity to it.  So I plugged the camera in and got that all set up, and then went back to the coordinates.  I took a 60-second image – and there it was!  A little fuzzy ball near the center of the frame. 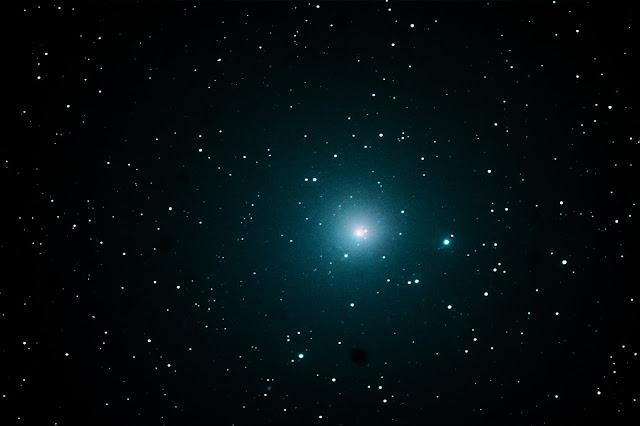 Because there were still some high clouds, I only did 180-second images, and because it was already so late, I only got 16 before I had to quit.  Also, guiding was not that great so close to the north celestial pole.  I also made a video from the subframes - it spans 48 minutes.

Timelapse GIF of Comet 41P moving through Ursa Major.  Each frame is 3 minutes long, and there are 16 frames, spanning 48 minutes.
[Sorry for the fast speed - I don't think I can control it.  The background brightness difference is from a thin high cloud that rolled through at the beginning.]

Table of Contents
Posted by AstronoMolly at 12:23 PM